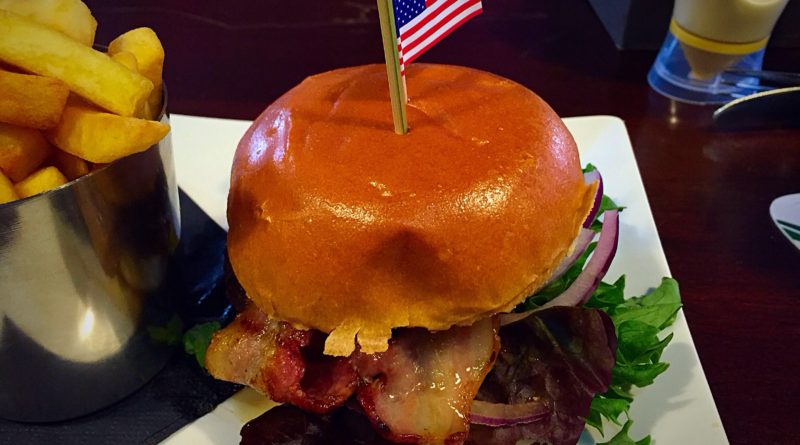 Pub burgers are generally poor. The vast majority, anyway. However, I’ve only ever heard good things about the burgers at Tib Street Tavern, a bit of a stalwart pub in Manchester’s Northern Quarter.

This place is going to be busy today. I think it’s busy most evenings, but today there’s international rugby and they are big on showing live sports. Can’t miss the place – flags everywhere. I went in at opening time and it was quiet – some stock deliveries were going in.

I’d already chosen what I wanted by checking out the menu online – pretty much standard these days – but although the £8.75 was quite reasonable, it was a bit annoying (although no fault of the pub) that I had nobody with who to share the 2 burgers for £9 offer.

Anyway, I ordered my food at the bar and chatted with the warm staff who were joking about the sound system and preparations for a fully-booked evening. I sat down after ordering and noticed my table was fixed to the floor (which was fine) but rather too far away from the fixed bench seat (less fine when it’s for food as it involves a less comfortable stretch, especially for shorter people.

It’s a minor thing though, and there were plenty of moveable seats I could’ve chosen if I’d wanted. It’s a nice place in there. Spacious, clearly a pub but with modern decor, uncluttered and not jumping into “bar” territory (yes there’s a difference).

The Maple Bacon Burger is one of several choices on a menu of mainly burgers and hot dogs. The burgers include beef (quite small at 4oz), chicken, lamb and the obligatory vegetarian one, as well as a nice touch – 4 half-size burgers giving a selection of them.

I did consider that burger tapas, but I got pulled in by what is essentially a bacon cheeseburger with medium being the house standard.

Chatting with the man I assume was the owner, I got the very distinct impression that this place did food and drink very well and was clearly immensely popular with sports fans.

When it arrived, it looked sort of familiar. The super soft buns, the diameter, and the cheese all looked almost famous and I definitely recognised the taste of the patty (I later confirmed that the patty was from Frost, the same as the old patty from burger gods Almost Famous).

Similarities ended there though, because where one is more than just a little bit famous for spectacular toppings, this one was altogether more straightforward.

I got stuck into the fries first – something I wasn’t expecting (perhaps if I’d read the menu properly…). Anyway, those fries weren’t heavily seasoned, which is a good thing. You can easily add salt and pepper yourself but can’t very well take it off if there’s too much.

Certainly not the best fries ever but hot, crispy and fluffy, as a free side-dish they ticked enough boxes.

But the burger. Wow – this was possibly the best burger I’ve ever had in a proper pub. The brioche was lovely and shiny and very squashy. It didn’t actually do too well holding the sauce in, and that made this a pretty messy affair. I did end up having to turn it upside down towards the end as the bottom bun thinned out.

Presentation was fantastic – all the right colours and smells. A vast jungle of lettuce at the bottom was perhaps overdone, but amongst it were some pieces of tomato and slices of red onion, the latter of which made their presence known in the most wonderful way.

On top of the patty was the bacon. Two or three pieces, a little on the fatty side but damned tasty with their maple treatment. The BBQ sauce, which was mostly responsible for my sticky hands, was fantastic too. Distinctly smoky and slightly sweet, it picked out the flavour of the bacon and thrust it to the fore. As I said, fantastic stuff.

But that’s not all, there’s the small issue of that meat from Frosts of Chorlton. As ever a good burger is made or broken by its patty and this one is amongst the best. Any concerns that 4oz was too small went out the window. This was a fantastic coarse-ground, medium-cooked chuck affair, seasoned with a “secret blend” which accentuated the beef’s great natural flavour.

To top it off, there were a couple of slices of American cheese. These could, perhaps, have been melted a bit more before service, but that wasn’t a big issue here.

I loved this burger. All the elements, great on their own, worked really well here together. The best pub burger, and surpassed only by some places that actually specialise in burgers.

A big gold star for the Tib Street Tavern, it’s a lovely place with good food and very friendly service. I left with a very happy stomach.