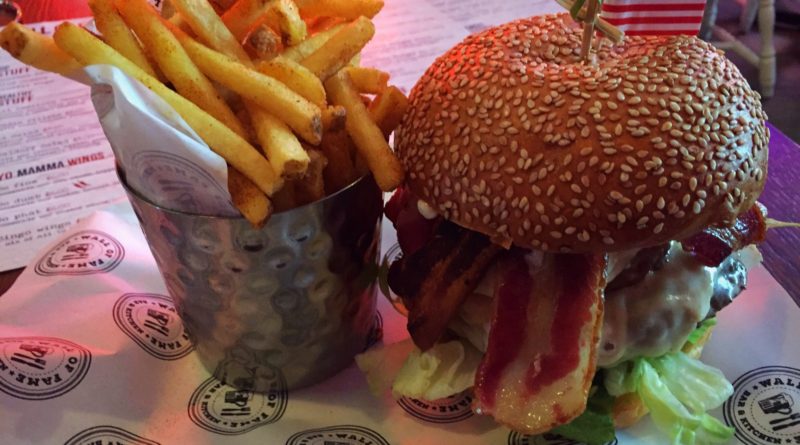 Wall of Fame is built into Liverpool’s actual Wall of Fame (which I’d never heard of) next to the Cavern Club (which I had). Enter via the back door and you’ll see names of famous people written into the bricks and of course tourists taking photographs.

Inside the place is quite dark, neon lighting, motorcycle on the wall. It has a bit more of a bar look than restaurant, but it does appear rather slick.

The menu is an extensive selection of burgers, pizza, wings, that sort of thing, but obviously I’m here for a burger so that’s where my eye is drawn, ensuring that the choice I’d made online beforehand was still the one I wanted.

Manager Tom explains the patties are cooked medium to well-done and that there are a couple of new items on the menu.

Not having been before, there’s no difference between new and old for me, but the new items seem to include the Empire State (a double cheeseburger) and a Flaming Cheeto burger (with an onion ring made of flaming Cheetos).

However, I’d already chosen the Uncle Buck, which is a bacon cheeseburger with an onion ring and added Mac & cheese. Tom also offered one of the large selection of sides/small dishes so I chose popcorn shrimp with chilli aioli.

So, as I said, the 6oz beef is cooked medium-well and provides the core of all the burgers except the token chicken one.

As I wait, a word about the menu. It fills two sides of A3 paper, with one side for the main stuff, and the other side for breakfasts and drinks. There really is a lot to choose from and I quite like the place.

When Uncle Buck arrived it was clearly not a small burger and this wasn’t even the double. It was a significant stack with a sizeable diameter too, and was presented in a lovely looking seeded bun with bacon, Mac and cheese all over the place, and the onion ring adding another patty-worth of height.

I was impressed, but before tackling the burger, I wanted to try the sides.

Firstly, a pot of house fries (included in the price) – these were well dusted, properly crispy and really very tasty. I’d rate those fries amongst the very best examples of standard fries anywhere, to be honest.

As for the popcorn shrimp with aioli for dipping – I really landed on my feet with this one – couldn’t stop eating them even when I was already full. Probably an unnecessary extra given the size of the burger but I can imagine this sort of thing being ideal with a few pints in place of a full meal. Small plates are the future!

But here in the present, I have a BIG burger to eat. Bacon, criss-crossed over the top as is de rigeur these days, was of the American variety – streaky and crispy. My personal preference is for British style bacon but I admit the streaky stuff works well in burgers, including this one.

The Mac and cheese with its slippy texture dominated mostly and was also responsible for the difficulty I experienced in holding this together. Well, you try putting a bun on rollers and see what happens!

The onion ring was nice enough and gave a mid-level crunch – between the hard crispness of the bacon and the soft goo of the Mac. Taste-wise it didn’t really come through though.

And on that topic of taste, neither did the lettuce. It never does. It was there, alright, and looked fine, but no taste. And I’m so pleased there was no tomato on this. In fact, I think I’m right in saying there’s only tomato on the biggest burger.

So, moving on – there’s not just Mac and cheese, but there’s cheese too! As someone who loves a bit of cheese, I found this overload all very tremendous.

And that brings me finally to the beef – this 6oz slab that is the core of the burgers here. To be honest, if it wasn’t described as 6oz, I’d have estimated 8 – it really did look big.

Well, getting into it, I couldn’t find even a hint of pink, suggesting it had been cooked more well-done than medium, but I’m willing to accept that this was down to the lighting, which made picking out details like that rather tricky. I certainly didn’t have any issue with the taste – nice and meaty, lightly seasoned and definitely fit for purpose.

I would only suggest it could be more coarsely ground – it’s a big chunk of beef and tightly packed like this makes it a bit harder to get through than it needs to be.

Room for small improvements then, but very solid and extremely enjoyable. I think there’s considerable promise here and with apparent long-term plans to open branches in other cities, it bodes well for our stomachs (although for marketing, the connections to the Wall of Fame will have a lot less resonance outside Liverpool).

Finally, I need to add that I was not asked to pay here, as it was arranged and covered by the venue’s PR but (and you know this by now) it didn’t affect my opinion.

I’ve told you what I liked, where things could be improved and given an honest overall view, just as if I’d gone in incognito with my own credit card. That’s the BurgerLad.com way! 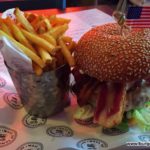