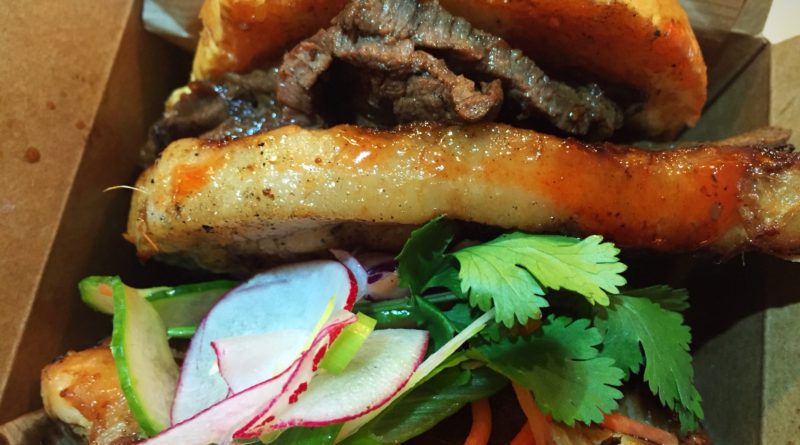 In a return visit to the Arndale’s neat little Vietnamese stall, Viet Shack, this is my first visit since the refurb, which essentially involves a bit of wood and a new menu (the latter of which is much more interesting).

Last time I was there, I had the Lemongrass Chicken Burger, which was a steal at £3.00.

I noticed that it’s still there on the new menu and hasn’t been increased in price. This time I’m here for something bigger – the newly developed Viet Mac, which at £6.50 is considerably more expensive (although still well priced considering what you get inside).

The name has obviously been borrowed from the famous high street burger, but in fact the build seems to take more cues from the likes of Solita’s Once in a Lifetime or the McDonalds menu hack, Land Sea & Air, where three types of meat are piled into the bun.

In Viet Shack’s newbie, the meats in question are lemongrass chicken, seared beef and spicy pork chop, along with the extras set out above, including the Sriracha jam (which is what I assume they mean when they ask “do you want it spicy?”, grated carrot and other garnish).

Presentation-wise they’ve gone for the Shake Shack / In N Out look – burger on its side displaying its goodies for all to see. It’s a nice touch aesthetically although it does present a slight problem practically.

The burger is jammed in the box and the bottom half of the bun isn’t strong enough – that means it crumbles as you pick it up and the contents (in my case most of the chicken) fall back into the box. Combine this with food court style of no plates – it’s a minor annoyance.

As far as annoyances go though, it’s small compared to the one that isn’t Viet Shack’s fault. Seating. There are nowhere near enough tables for the sheer quantity of customers and food outlets here. I got lucky but did imagine what it would be like trying to eat this standing up.

So that’s the niggles out of the way – what about the burger?

Well, this is pretty dominated by the pork, which sits in the middle. It’s a massive, generous chop, nicely grilled and seasoned.

The slight problem with is is that it comes with an edge of fat. Totally normal and fine if it’s on a plate with fork knife and side dish etc, but in a burger it’s a bit of a juggling act with fingers and teeth.

I liked the pork taste-wise. Didn’t get a huge spicy hit, but it was subtle.

The beef isn’t a beef patty in the traditional burger sense. It’s strips of seared beef, again tasty, and in this form easy to take out and taste-test by themselves. They are a lot thinner than either the pork or the chicken and as such probably the junior partner in this affair.

The chicken appears to be the same as that used in the lemongrass chicken burger, which is definitely a good thing. I ate most of the chicken pieces separately, because if you remember way back at the beginning of this story, they were in the box.

The spicy jam on this isn’t strong. It’s sweet and subtle. I think the burger could probably do with a bit more heat, but I bet they’d be able to do that if asked. I didn’t ask because I wanted to try it this time the standard way.

Overall, there’s a lot of good stuff in here, it’s prepared in front of you and it’s tasty and fun to get stuck into, as long as you get a table. Another winner for the cheeky Shack folks.

It’s a very big tasty meal at a very small price and for that reason I’d suggest you try it. Me personally, I’d probably go back to the lemongrass chicken, as it is smaller and easier.

And as a final thought, you know what else is new on the Viet Shack menu?… A duck burger. I’m just saying….. 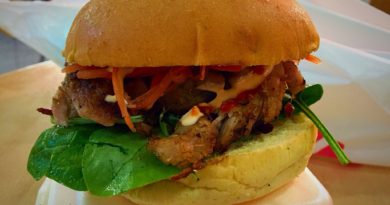