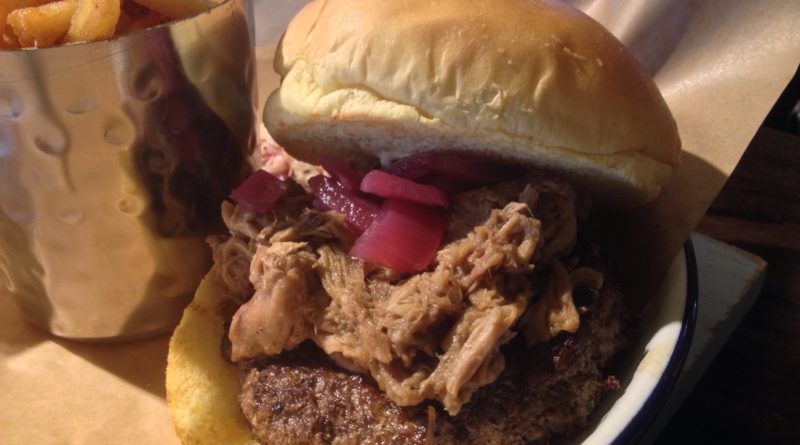 Turtle Bay is a chain of Caribbean restaurants with approximately 25 locations throughout the UK.

The brand has not been without recent controversies. News of their tipping policy was reported by The Observer back in August.

This was followed up in September by reports of the chain having to apologise for using software to “black up” photos of its customers and give them dreadlocks as part of a marketing campaign.

Turtle Bay opened its Cheltenham restaurant in March 2015 and we had always threatened to check it out.

I even reached out to them via email asking if we could come in to do a review but had zero response (their website has a section showing all the good comments received by holding a blogger event in Huddersfield).

But once we heard of the tipping policy we decided to give it a wide berth. Until now… you see we walked past one night and the island bar inside looked kinda cool and the lighting really made the place look inviting.

This was certainly more a date with Miss Milkshake than a bona fide review session but with a burger on the menu I couldn’t possibly make it through the afternoon without turning my attention to a review could I?

Inside the centrally based Cheltenham restaurant there is a really good vibe going and we really wanted to sit at the island bar right by the “wall of stereos” (see above).

There was also another reason for our visit – COCKTAILS! And at Turtle Bay a very generous 2’4’1 Happy Hour (running from 11:30am until 7:00pm and then again from 10:00pm onwards) means that for £6.95 you can get any two of the same cocktails from an impressive menu.

What could go wrong…!?

This is a good venue. You can very much just come in, have a few drinks at the bar and order some food if you wish. On the flip side (and like 98% of the tables here) come in for food and order a few drinks. There is a difference…

I think I only saw one table not eating and that was a couple of blokes with a pint of Red Stripe each.

Inside today, this was very much ladies (or girls) lunching in smallish party-sized groups or couples. It was packed, and I mean every table was taken! We were sat at the bar and for us, the best spot in the house!

I’ll mention the bar staff working today (Saturday 21st November 2015). Excellent. Really friendly, chatty without being obtrusive and always on hand to advise on the cocktails they were serving us or ready to take our food orders.

In fact, after about our 4th cocktail (more would follow) one of the lads said “I wish I was having the day you’re having.” It was that sort of service that really changed our perception about the place instead of this “we’re doing you a favour letting you in here” that you too often get from other establishments.

We kicked off with a Beach Food Platter (£12.95) featuring Spicy jerk chicken wings, pepper roti, sweet corn fritters, and garlic ‘n’ herb flatbread. All were very tasty – my personal preference being the fritters but the unusual thing here is to give you three of everything. This makes deciding who will get that last wing a relationship maker or breaker.

After more cocktails and really enjoying the atmosphere in there (blatantly coming back in the evening because there’s something about the window lights I just need to see in the dark) we ordered the Curry Shrimp and Mango One Pot. Now this was really very good and served with flatbread was excellent value at £9.65. I was starting to see why this place is so popular.

After all this and yet more cocktails I very nearly passed but in the end I did order the Street Burger – available in Turtle Bay’s Lunch ‘n’ Light menu priced at £6.95.

Again, an exceptional offer as this is served with either Caribbean slaw, fries or a dressed salad. I opted for the fries.

The burger itself is fairly reasonable. It’s cooked well done but has a juiciness which was certainly commendable. The jury is out on whether it is handmade on the premises or whether it is frozen and delivered in.

You certainly pick up that Caribbean spice from the burger. Scotch Bonnet reigns supreme in almost all the dishes we tried and this was certainly the case with the Street Burger.

It’s not overpowering or silly in terms of heat levels. It just gives that slight glow to your palate which is an enjoyable sensation.

There’s a respectable amount of spicy pulled pork on the Street Burger and it’s got a slight BBQ flavour which I believe could be from using Encona Jamaican Jerk BBQ sauce as the base.

The brioche bun was quite tall I thought but was super light and squishy. It just seemed to lack that buttery taste which I associate with brioche.

I didn’t think much of the sweet onion chutney if I’m honest.

It didn’t really feel like a “chutney” in terms of texture. This felt more like a couple of pieces of onion which had been sweated down slightly – it was missing that relish-type feel you expect from a chutney. The few pieces of onion did however bring a sweetness as stated in the description.

The Street Burger is finished with a herb mayo which works quite nicely with the rest of the ingredients on-board. It contrasted nicely with the spice from the seasoned patty and there didn’t appear to be too much of the stuff. Sometimes too much mayo can really ruin a burger but this wasn’t the case at Turtle Bay.

So after today would I return to Turtle Bay in Cheltenham?

Based on my experiences I would say that is a resounding yes.

The staff were excellent, the bar seats exactly what we were looking for and the list (and price) of cocktails really very much made this an extended happy hour!

The food is good and very reasonably priced with a touch of Scotch Bonnet running throughout the dishes we tried. The atmosphere and vibe in this restaurant is relaxed with a buzz of conversation and you can’t help enjoy yourself taking it all in.

In terms of the burger, it’s a reasonably tasty entry to our review library but nothing amazing, but on the flip side not terrible either.

With some work on the chutney and putting some fresh rocket salad on it this would possibly raise the standard.

Again I’m not certain if these are made fresh or frozen and delivered in. Would I have it again? Probably not.

But then there’s so much more to Turtle Bay than just a burger.