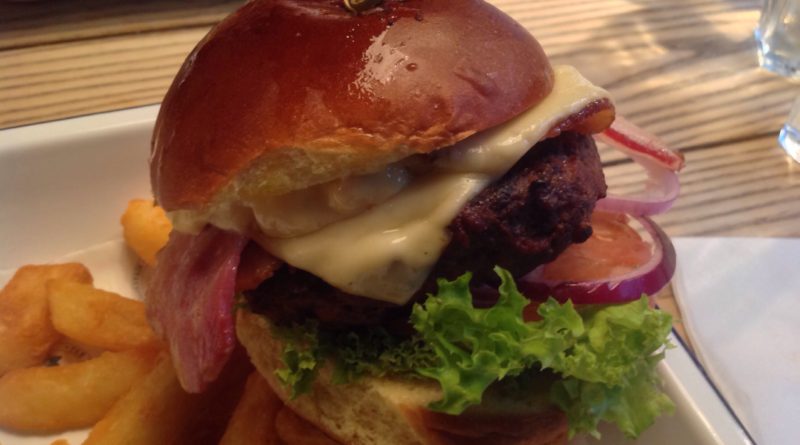 Now Burger Lad® usually measures how excited he was about a burger by the length of time it takes from eating it to getting the review published. In this case we’re looking at approximately 48 hours.

We were very much looking forward to visiting The Lazy Cow in Stratford.

Dexter cattle are known for producing excellent beef and on the menu was a Do Nut burger which sounded like something worth trying.

I’d also got a £5 off food voucher and on the night we visited all burgers were (unexpectedly) 20% off. Had it not been for this we’d have probably visited their sister restaurant The Shed, which is billed as Stratford’s only burger bar with riverside seating. Maybe next time…

The Lazy Cow Group has three other restaurants in Salisbury, Solihull and Warwick so all feature in fairly affluent areas.

Inside the Stratford one it has an upmarket, industrial style steakhouse feel to it but with a rustic charm that you would expect of Stratford. It is also delightfully placed by the river but unfortunately we were unable to dine outside on this occasion.

Sat in the “Oxblood” red leather booths I perused the menu under intimate lighting delivered by colander style light shades.

We kicked off the event with a portion of Pulled Pork Nachos. These were good! The nachos themselves were very clearly homemade instead of someone just pouring a bag of Doritos on a plate. Impressive. The double P was tasty, slightly sweet and worked well with the jalapeños and fresh coriander.

Up next was the burger and this was presented to me in a metal Cub Scout tray – which we’ve seen before at Boston Tea Party.

As you can see from the pictures it was “OK” in terms of presentation.

The big, fatty piece of bacon poking its tongue out at me put me off a bit (I actually ripped that protruding piece off). The top bun, or crown as we call it in the business was skewwhiff from the rest of the ingredients despite the customary skewer.

I removed the fresh tomato (I’ll never be a fan) from the lightly toasted, buttery brioche bun and took my first bite. God it was messy (not always a bad thing, see The Bird)!

There seemed to be loads of that lazy cow relish which was a mayo-based sauce. Despite in my mind thinking “I don’t like it”, with every bite I took it surprised me each time as it was tasty.

I don’t know why but to me a relish means a pickled/chopped vegetable or fruit but I wouldn’t describe the Lazy Cow relish this way. It was a strange one that I can’t quite describe, possibly bordering close to an upmarket, gourmet Big Mac sauce.

There was plenty of fresh, green lettuce on-board but I was a bit disappointed to see some of the “stem” on the end of one of the leaves – personally I would have taken it off but it was no major deal.

The red onion rings were a welcome addition as ever. Fresh, sharp and providing an offset to the main event we all want to know about. The BEEF!!

Outstanding! I really loved the deep, rich flavour impact of the 8oz Dexter burger. The patty had been cooked to perfection with just a hint of pink (you are asked how you want your burger done). It had a fresh, meaty and buttery flavour to it and fused nicely with the thick, nicely melted gooey Swiss.

Overall, it was a bit of an unexplainable experience.

Yes the beef was good but I did think the execution of this build was slightly off and I did feel a bit disappointed.

Due to the excess sauce the brioche bun perished a little and thus descended into a bit of a mess to be honest.

I didn’t finish the chips as I’m not a massive fan unless they are fries (“well yes BL but you are in a Steakhouse”).

I put in my original notes that the burger left me with a numb feeling but I think this is a bit harsh. On reflection, it was an enjoyable burger but I think for close to fifteen quid I just expected something a bit more which was not there. And that bacon was very fatty…

Miss Milkshake went with the Do Nut Burger which to me did not look half as good as the Red’s True Barbecue one. Watching her eat it however, I did feel like Harry Burns sat opposite Sally Albright!

So would I recommend The Lazy Cow!? Yes… yes I would.

I’d probably not have the 8oz Dexter Burger again but I am definitely up for checking out The Shed and am tempted by the Vegetarian(!!) Mexican Chilli Bean Burger.

Oh and if you are reading this GraceHQsky… this is not a job or a hobby… it’s a way of life! With that let’s take one last look at the Lazy Cow 8oz Dexter Burger.