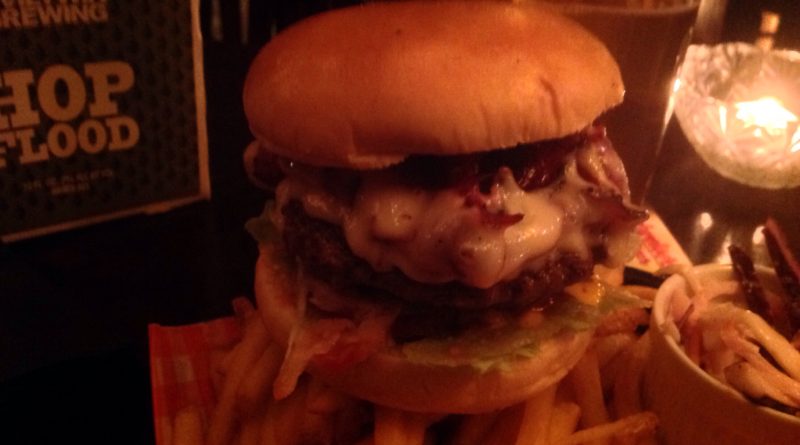 We are always looking for new burger places to try out, what we didn’t realise is that there’s a bit of a burger scene going on in Worcester at the moment.

This revelation started with the news of Byron opening in 2015/2016 followed by our feature in the Worcester News and then the subsequent visit to the newly opened burgerworks.

“You fought in the Burger Wars?”

“Yes, I was once a Burger Reviewer the same as your Father.”

Since publishing that popular review we’ve had a number of recommendations to places that are serving up our favourite food staple.

It was only about a month or so ago we’d been Googling “Worcester burger” and only found one or two uninspiring suggestions.

Since then however we’ve discovered a bit of an underground burger movement in this ever improving Cathedral and River City and one of the establishments cranking out urban burgers is The Firefly in Lowesmoor (adjacent to the multi-million pound St. Martins Quarter development).

Unfortunately The Firefly does not have a website so I was unable to peruse the menu like I normally like to before venturing to a venue, however the very kind owner was really helpful and emailed me a couple of photos of it and despite many tempting offerings I just had to have the Pastrami Swiss Burger.

Having been a past resident of Worcester for close to seven years I’d obviously been to The Firefly before but never to eat.

The building is beautiful and is split over a number of floors (we had a guided tour after eating).

This pub/eatery prides itself on being a Craft Beer Bar and with an extensive selection of UK, American and Belgian beers you’ll not go thirsty spending an afternoon or evening sat in what can be described as a snug, eccentric hunters lodge style front bar area.

We loved it in here and it had a warm, cosy and inviting atmosphere.

There is a large stag’s head mounted over the blazing open fireplace and eclectic lighting from a chandelier, old fashioned carpet lamp shades and fairy lights means this is dim but not dingy inside.

Indie tunes play over the contented chat and it has a grown-up student vibe about the place.

I would have preferred to have eaten away from other non-diners but our hosts had kindly reserved us a table but that’s what I love about The Firefly.

It has a funky, laid back feeling so it doesn’t matter whether you’re here to just drink or grab some food too. It’s not like a restaurant, but not like just a bar either.

It’s the sort of place you could roll in mid to late afternoon and just drink a few good beers and then decide on grabbing something off their tempting menu without feeling self-conscious that others around you are not eating.

We sat waiting for our order looking at the collection of decorative liquor bottles on the wall behind us.

Before long, our food arrived with a smile and the burgers were served up on mini pie dishes which housed a mini mountain of skin-on fries and a ramekin sized portion of coleslaw.

And as you can see from the pictures the burger was presented with a degree of precision. You’ll have to accept my apologies for the darkness of the shots.

On our table this evening was Heinz Ketchup and BBQ sauce and those fries were hot, crispy and seducingly moor-ish dipped in the later. Blatantly homemade and really very good I very much enjoyed these fries.

But just how was that Pastrami Swiss?

Well this might sound odd to you but I don’t like Ketchup, I don’t particularly care for Mustard and I’m not a massive fan of Sauerkraut.

So why order a burger with these ingredients on it…!?

Because the mixture of components should work and they bloody well do! It was obviously a play on the classic Reuben sandwich and my goodness I am so glad I went with for this option!

Weighing in at 5oz the beef patty is not trying to be something it isn’t. It’s the perfect size in my opinion and is lovingly handmade on the premises with just the right amount of seasoning.

The texture is good, there was a touch of flavourful fat but it was tasty, thick, and juicy and had been cooked medium for us this evening. Tasty and satisfying with no gimmicks necessary.

I’ve been eating quite a bit of pastrami recently so I couldn’t pass on the opportunity of having this on a burger.

It was slightly crispy and sat proudly on the beef, I wondered what the impact on the taste would be by having it cooked slightly but this magnified its salty, peppery flavour and I found myself delving back and back into this goodness.

I couldn’t describe the texture of the Swiss at the time but it was quite firm and had that distinctive sweet and slightly nutty taste. It was melted perfectly and brought everything together on this burger with a “grown-up” flavour.

As a mouthful this burger delivered a bit of everything. You had the salty, savoury flavour from the pastrami and beef but then a slight sour from the Sauerkraut which was not overbearing in the slightest – rather complimenting the meaty goodness on-board.

And then just when you didn’t think this could give more you got a sweetness from the ketchup which then rebounded against the tang of the mustard before that was cut through with that sharp fresh red onion.

This goes full circle bringing you back round for another bite and a repeat of the sensation again. Excellent. And no fresh tomato either!

It didn’t take me long to complete the enjoyable task of finishing this awesome offering from The Firefly and I turned my eye back to the menu.

Every Wednesday is Burger Night where you can grab two burger meals for £10 which is an absolute steal and I advise anyone reading this to check out this hidden gem ASAP.

There’s also an impressive array of wings, ribs and other meats including pulled pork and beef brisket. Sound like a lot of meat…? Well you didn’t think we’d be going to a salad bar did you…!

It was good to see a Juicy Lucy on their menu which Miss Milkshake went with on this occasion and she said it was amazing and that she didn’t want the sweet potato wedges to end. True testament to what’s being served up at The Firefly.

Cities and towns everywhere are littered with places like Wetherspoon’s and Yates offering you a sub-standard burger and a watery pint.

If more people went to places like The Firefly instead the world would be a better place.

The venue reflects its personality in the food and offers up real quality and flavour and we will definitely be returning soon! It’s a fantastic place to go and it doesn’t make you feel like you need to be part of a clique to enjoy it either.

Overall, the Pastrami Swiss burger was a very enjoyable experience and a very credible player on the Worcester burger scene.

I would recommend to anyone popping in and letting the friendly staff look after you with some exceptional beers and quality, homemade food in a unique and inviting environment.

If I had a bar and kitchen I’d definitely want it to be something like The Firefly.

Massive thanks to Mat for getting in touch and inviting us to try your burgers.