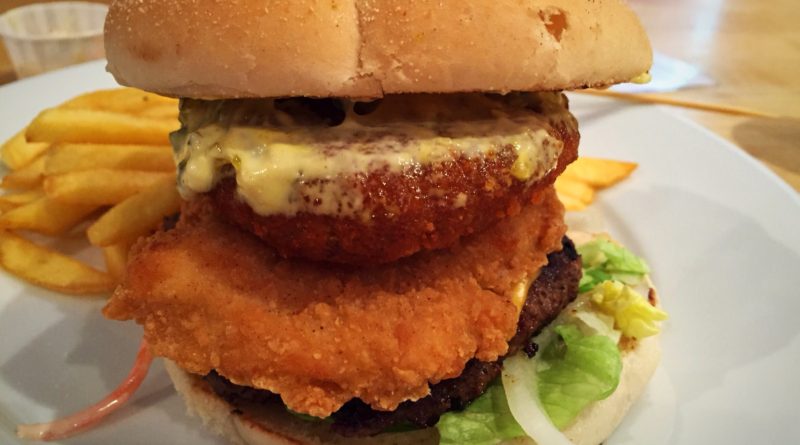 Review of The Courtyard Wigan – The Orwell Burger

Beefburger, cheese, fried chicken breast, our own pulled pork puck and our own Big Mac sauce.

Wigan. Technically it IS part of Manchester, well “Greater Manchester” but it is about as far from the city centre as you can go in the county before you reach Ireland.

Anyway, The Courtyard, as far as I understand, took over from a sort of brasserie or cafe with the same name and now offers American-style comfort food.

Besides being tucked away in Wigan, it’s also tucked away a bit off the beaten path so you really need to know where to look.

But if you look, and you find, then you’ll be rewarded with a solid burger menu as well as a number of specials. There are also quite a number of other delights I’ll mention later on.

When in, er, Wigan, it seems right to pick the most Wigany-named thing and that seems to be the Orwell (well, really it was going to be that or Formby, wasn’t it).

It’s a tower of beef, chicken and pork at a pretty reasonable price (one can’t help thinking the location has a lot to do with that and the same thing would probably double in central Manchester).

I didn’t ask, but I got the impression the full menu is available all day – a pleasant rarity.

I put my burger order in a little after 11:30 and no eyelids were batted. It is a pretty small place (although there’s an upstairs I didn’t explore). Sparsely decorated and lots of light wood. Two FOH and one (the owner I assume) in the kitchen.

As I waited, I ticked off many comfort food staples on the menu – burgers, pizza fries, chicken and waffles, alongside cafe classics like jacket potatoes, sandwiches and breakfasts of all sizes.

The other bit that stood out was the fact they also reverse-engineered the Big Mac sauce. Not the first place I’ve been to that does that (I’ve had it at Solita and BLHQ, as well as McDonald’s obviously) so it’ll be interesting to see how it compares.

There’s also a sourdough bun in play here instead of the standard, but probably overused, brioche. The last thing I noticed was that they also have a burger challenge called “wheels of steel” but I didn’t ask.

It’s quite an impressive menu – on paper at least – so let’s see how it pans out in practice.

It arrived on a plate with a decent amount of chips, looking all big and impressive. Quite high, courtesy of the triple meat content, but also quite a hefty girth.

There were a couple of problems at the outset.

Firstly, it was obvious the bun was nowhere near strong enough to hold everything in for long. It was tasty and fresh but totally crumbled after a few bites.

I began by turning it upside down to make use of the thicker top half but after a short while that too gave in and I had to finish the meal with cutlery.

The other problem was relatively fleeting, namely that I felt the pulled pork could have been a bit sweeter, the beef could do with more seasoning and the sauce could be emphasised more.

I’m happy to say I changed my mind on all these points, except the bun, as I got deeper into the Orwell.

I’ve mentioned the bun, so let’s have a look at the other contents of this big, but relatively straightforward construct, top down.

Firstly, that pulled pork puck – basically a wodge of pulled pork in a deep fried crumb – think hockey puck – quite an interesting way to do it, creating a pulled pork patty of sorts. And you know what – it grew on me.

It was very tasty actually and I pulled pieces out with my fork just to confirm it actually was slightly sweet, so my initial reservations were wiped out.

Onwards and downwards through the stack, chicken next.

Courtyard has more or less nailed fried chicken by the looks of it. The crumb stayed on, which you’d think is obvious, but it’s amazing how many places screw up the buttermilk.

The only thing, and it is personal preference here, would be to make it a little more spicy – this burger with a kind of zinger in the middle would be spot on.

Finally, the core of any burger is the beef patty and this one was good.

A good size at 4oz (small on its own but bear in mind what else is going on in here). Quite loosely packed and tasty. Again, I didn’t ask but I’m guessing there was an accomplished use of chuck and/or brisket in this mix.

It was seasoned – I’d prefer perhaps a little more, and while it is straightforward to self-season one’s own chips, getting salt and pepper onto a patty inside a burger is a different matter.

On top (and underneath, I think) of all of this, was that house Mac sauce. I take back what I said earlier, because this stuff was lovely.

I think the colour was rather more yellow than the original, but the chunks of pickle and that classic sourness were both present. Lovely.

Is it the best burger in Manchester? No, of course not but I don’t imagine that’s the aim here.

Almost certainly the best burger in Wigan though, and that’s the target market. I really do hope it is well enough known because although the decor may suggest a morning coffee-and-crossword spot, this is definitely a full-on comfort food emporium.

I did enjoy this burger and I’m really pleased it tackled my initial reservations head on.

The fried chicken is something I’ll come back for – with waffles, gravy, cheese and maple syrup. It was good.

As for the burger as a whole – thumbs up. Could do with a more robust bun but everything inside was very enjoyable. As I said, there’s no shortage of variations on this menu, so it definitely goes on the “must return” list.

And if for whatever reason you have to be in Wigan, eat here and thank me later. 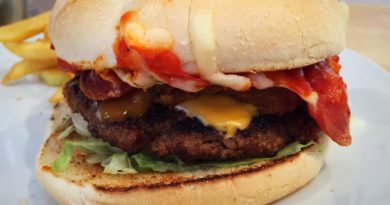 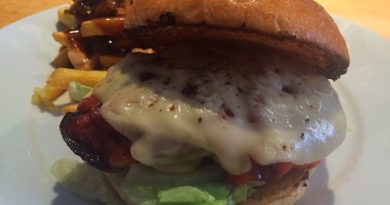