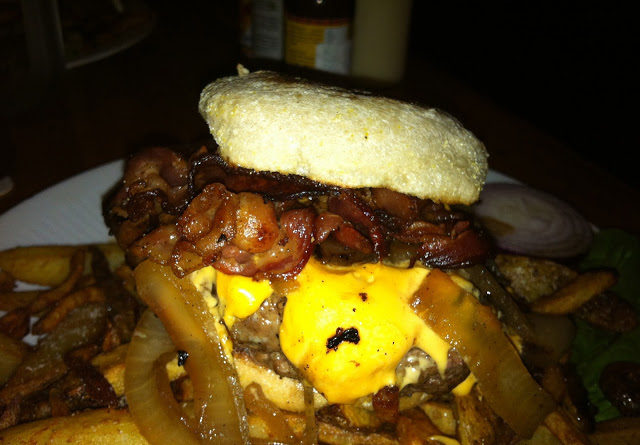 Review of Da Woiks Burger from The Bird, Berlin

The Bird is a New York style bar and steakhouse, serving undoubtedly Berlin’s best steaks and burgers as well as some other stuff. All burgers are made from 250+ grams of premium German beef. In other dumps it would be a steak, here it goes through our grinder every couple of hours to become the best burger in Berlin. Grilled to order and served with our fresh hand-cut fries, lettuce, tomato and pickle.

Welcome to part two of the Burger Lad® ‘Burgers in Berlin’ tour where we profile a number of burgers we discovered on our recent trip to Germany.

The Bird was formed in 2006 and has an excellent reputation and ‘whoop ass’ attitude. It is considered a must on the burger scene in Berlin. Before going I tweeted that we would be stopping by there soon and Mr Manwich (on Twitter) had these profound words for us:

The Bird in Berlin gave me the single best burger of my life. No other burger has come close. December 31st 2010. Enlightened.

Any burger joint that has the following on their website is enough to get Burger Lad® bashing down the door to get in:

Please at least try eating the damn burger with your hands. All you uptight people with forks and knives are driving us crazy. And for God’s sake don’t order your meat well done.

So it was with high hopes we jumped on the ultra-efficient U-Bahn in search of this Berlin burger institution, and luckily for us on this Saturday afternoon we managed to grab a table for two!

It was a busy, bustling lunchtime crowd when we arrived and I immediately recognised a tune from the fabled BBC Radio 1 Portishead Essential Mix and knew I was in the right place. I noticed on the table the traditional pairing of ketchup and mustard bottles but I was particularly amused by the roll of kitchen towel. Things were going to get messy! 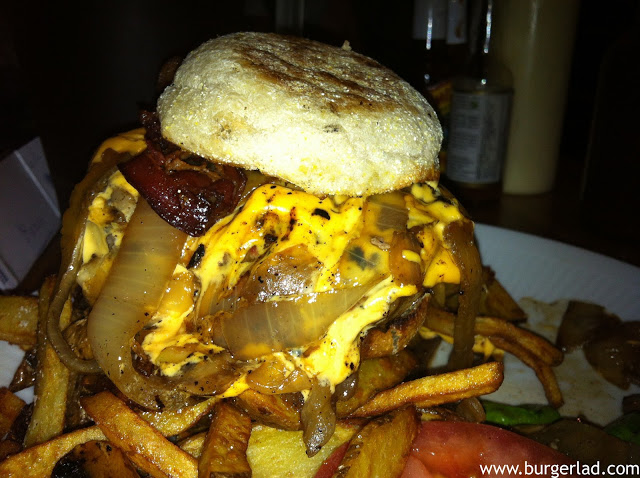 We had been walking and train hopping all morning so we needed something to quench our thirst and what better way than a 1.5 pitcher of Krombacher Pils… and for this lunch, both agreed (for once) against the ‘Napalm Wings’. This wasn’t due to the fear factor (you can see the ‘Atomic Wings’ from Atomic Burger here) but mainly due to the fact we wanted to focus on the main event. 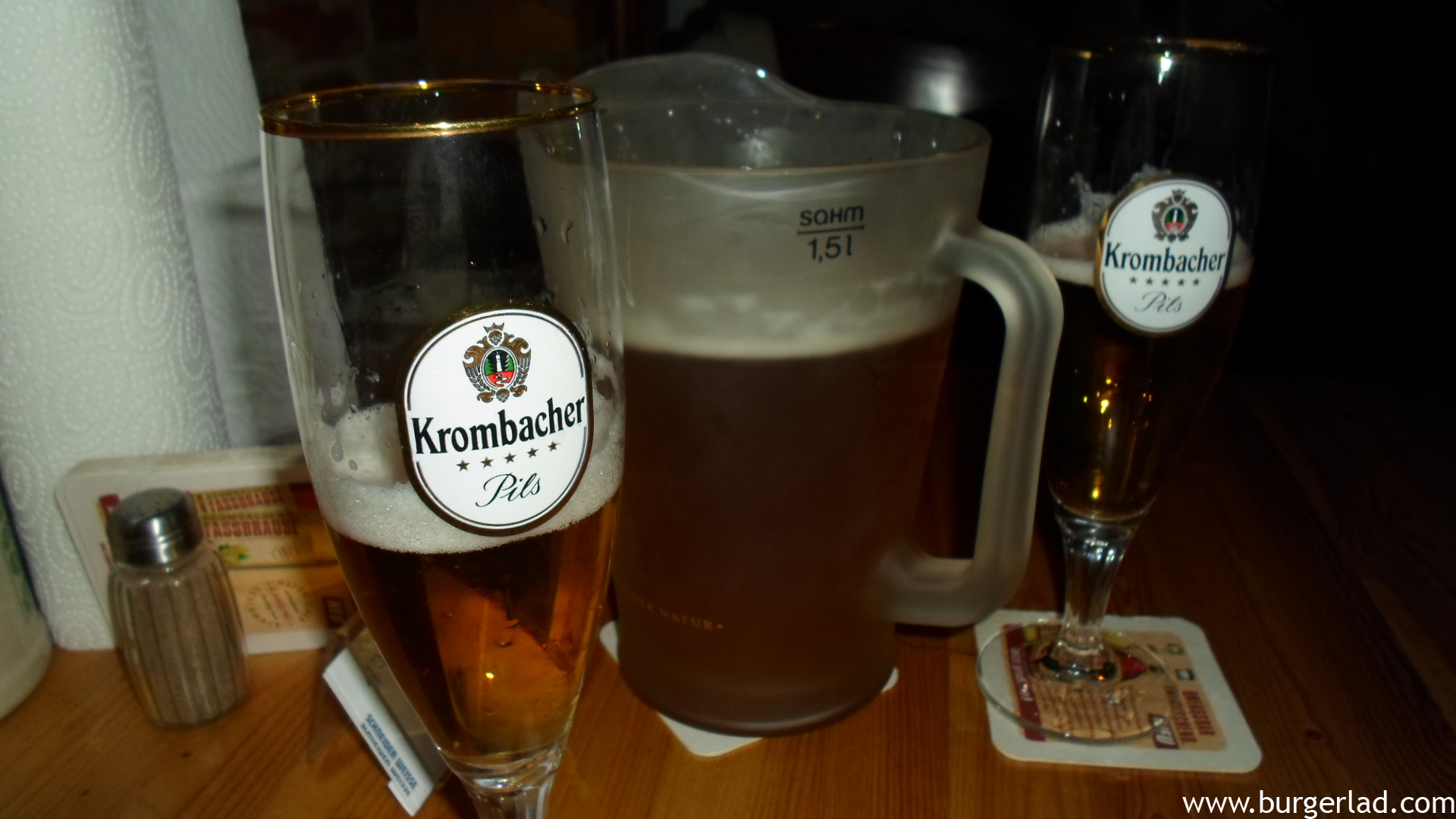 The Bird is a cool burger joint with exposed red brick walls, moody lighting and cafeteria style seating. There was a loud and lively crowd here on this day and now House of Pain was drowned out by people chatting and enjoying themselves. It was a great atmosphere and the beers started to go down far too easily! 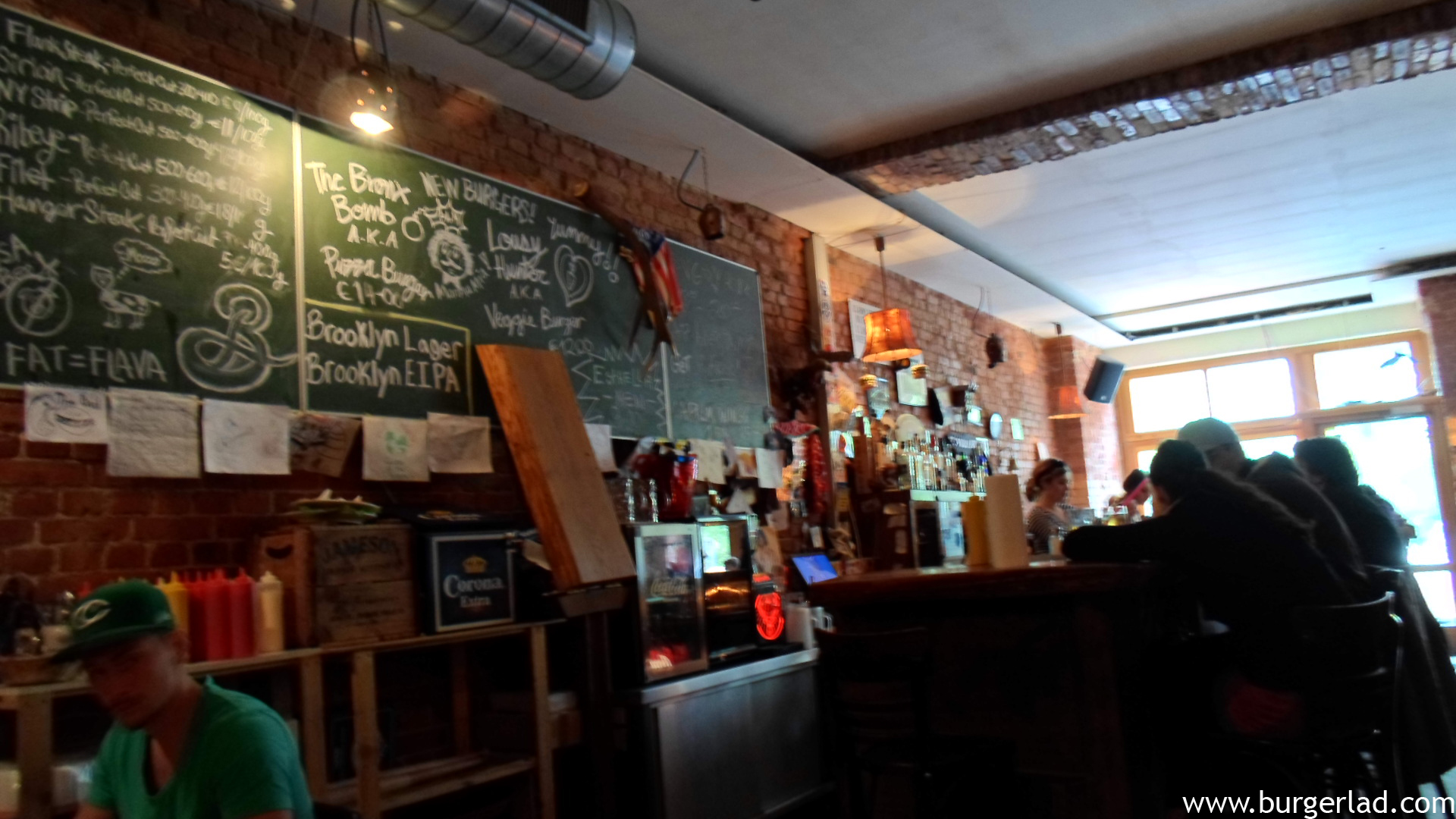 Earlier that morning we’d visited the Über-cool Alex Vintage store. Anyone visiting Berlin should definitely check out this treasure trove of clothes including a selection of 80’s football casual jackets. Yeti be warned.

Anyway… let us get to what we’re really here for. The burgers!! My travel companion went with the ‘Dr Zian’ with blue cheese and bacon, and I opted for ‘The Works’ with American cheese. I was really tempted by ‘The Bronx Bomb’ Pizza Burger and also ‘The Crack’ which is The Birds version of the Big Mac by a company I will not even name in the esteemed company of this kick-ass establishment.

We waited a while for our burgers to be served but this was no problem whatsoever as we continued through the first pitcher into the second. When the plate of food arrived I definitely gasped at the sheer amount on there! 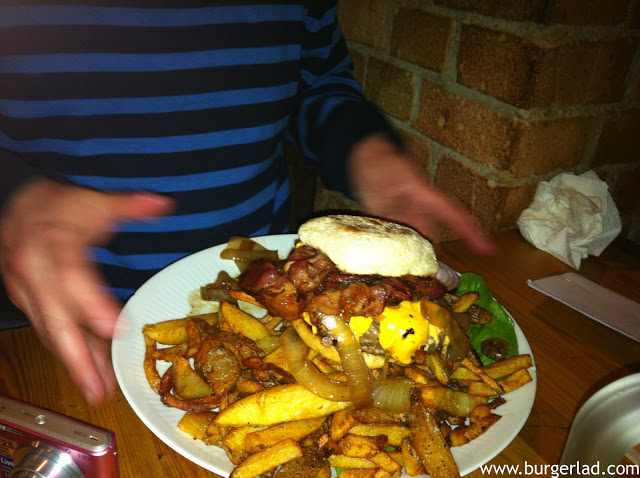 My goodness what a bloody mess of a plate? The smell coming from the burger and home cut fries was intense. After my very first bite all I could write in my trusted Burger Lad® notepad was “it’s a dirty, greasy slut of a burger. Amazing taste!”

This was true. The bun looked small compared to the monster it was trying to contain within it. It was like someone putting a pair of five pence pieces around a two pound coin. The charcoaled taste of the burger was brilliant and was like someone had cooked the perfect ten-out-of-ten BBQ grilled burger. The patty may have looked small but believe me it wasn’t. It was like the TARDIS from Doctor Who as although it seemed small in comparison to the bun it was very filling.

As you can see from the pictures the cheese was a big gooey mess which ran down the burger and mixed with the fried onions like a big juicy octopus ready to sting your face with flavour. Look at that first picture again! The onions though were “flipping brilliant” and we both liked the stack of lettuce, tomato and pickle allowing you to add at your discretion.

I’d ordered ‘mein burger’ medium rare and as you’ll see below this was cooked to a pinky, punky perfection. It was really, really juicy and the beef juices flowed all over the great bacon and sautéed mushrooms on board this ooze-fest. 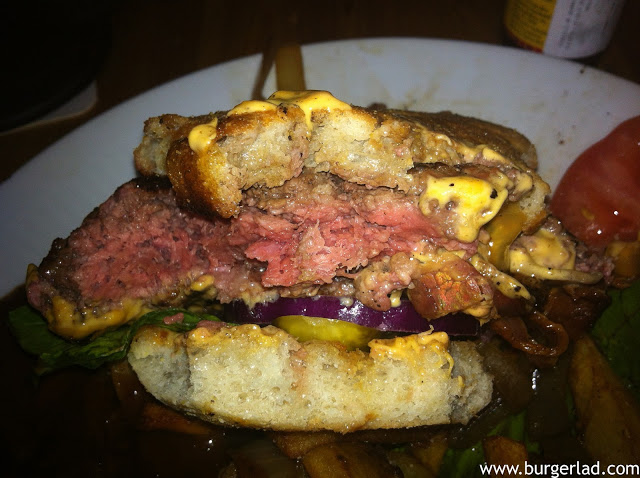 I’m starting to salivate while typing this so will hand over to my accomplice for her take on The Bird:

I was left disappointed after my Loxley’s fail when I missed out on a class act of a burger, so this time I was determined to get my mouth around something delectable. The Dr Zian was a close contender with Stilton and bacon topping the medium-cooked [to perfection] beast.

The home-cooked fries were just like Momma used to make and were crisp and not at all greasy. I especially liked the whole pickle on the side which gave a great escape route when the richness of the Zian became too much for me to handle. That said I was the clear cut winner in the race to finish the plate (thanks to Burger Lads constant scribbling) which earned me the respect of our waiter “Good eating!” Burger Lad received naught but a pitying stare. I will admit that a few of those delicious fries didn’t make it but that, quite frankly, filthy gorgeous monster of a burger was OWNED! 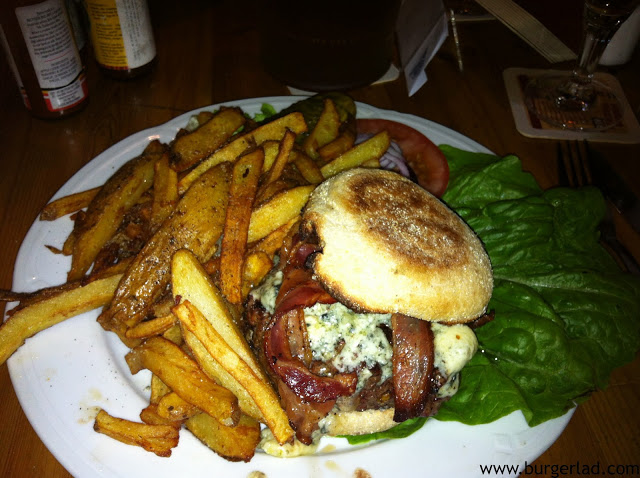 Back to Burger Lad….

The MASSIVE plate of home cut fries was perfect for dipping in their in-house steak sauce. In fact when we asked for BBQ sauce and mayo we were also given a mini arsenal of condiment bottles including chipotle hot sauce, Cholula hot sauce and African hot pepper sauce.

I would recommend this burger to anyone as long as they are not too concerned about a bit of grease and mess. I was glad of the endless supply of kitchen towels but remember fat = flava! And I have to add that the meat really is excellent quality and you can taste the fresh tender goodness of the Angus beef. This burger firmly flips ‘the bird’ up at its conglomerate ‘competitors’.

As we staggered away – part burgered, part boozed, all stuffed we looked back to see the sign with one thing on our minds. One thing for certain is that if you thing you’re tough enough to go to The Bird then you better be bloody hungry! 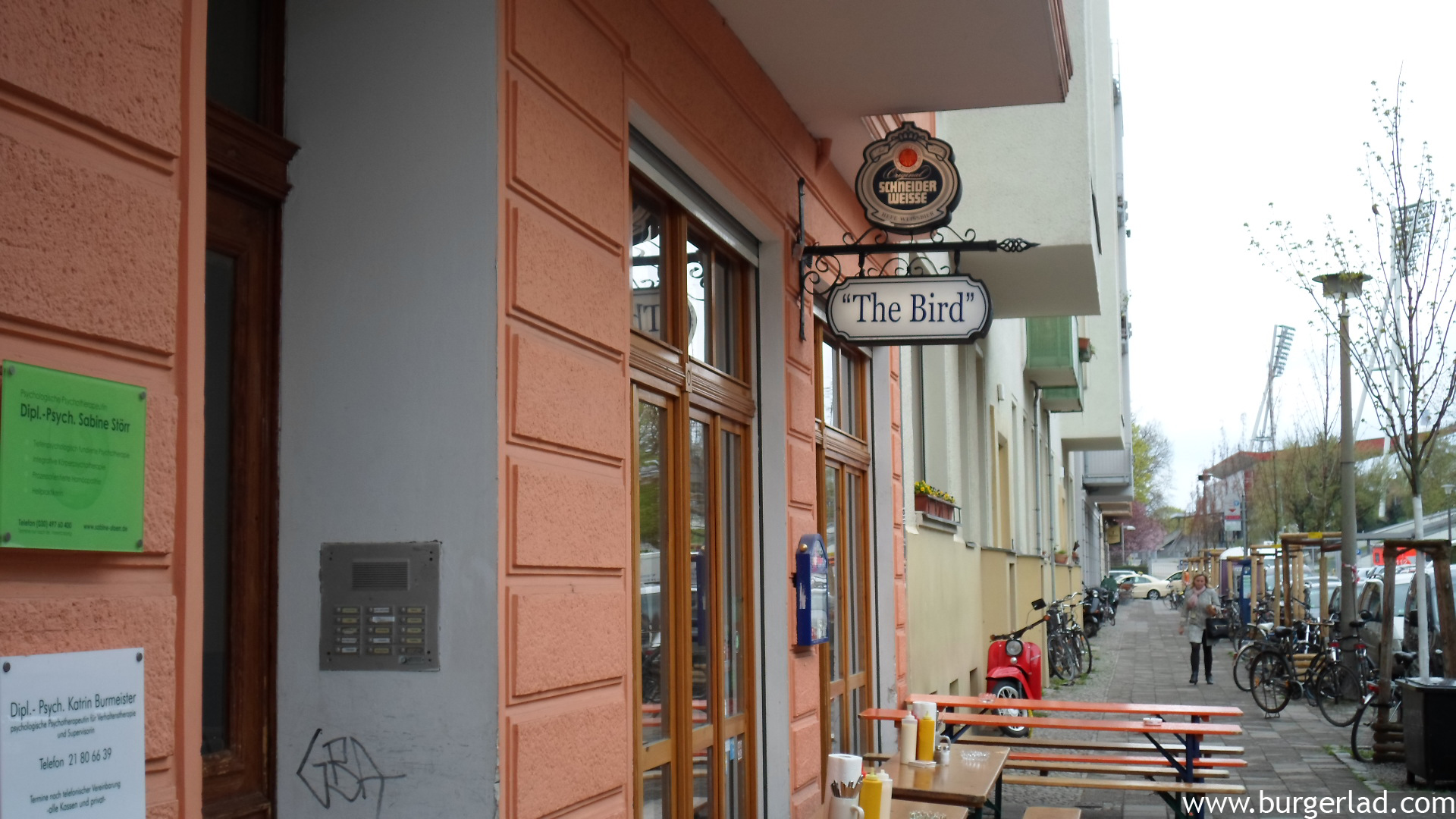 Let us take one last look at this Rock ‘n’ Roll burger. It is the sort of burger that would smash up its hotel room, throw a piano out the window and flip the bird to on-looking paparazzi as it was being led away by the Polizei. 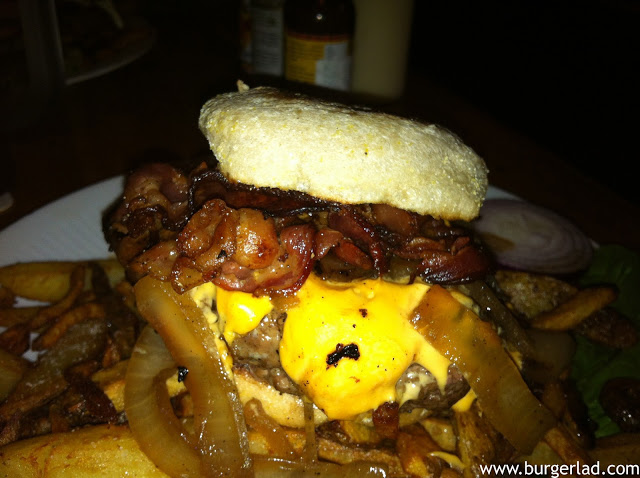 Keep a look out for part three of #burgersinberlin coming soon to Burger Lad®.