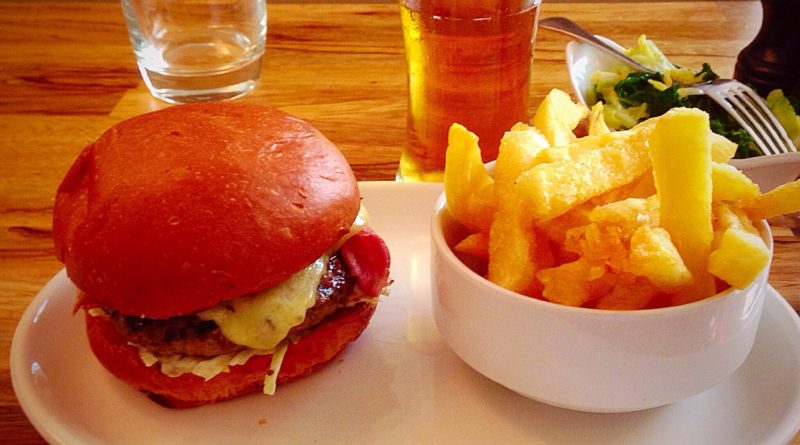 Review of The Admiral Codrington’s Burger

I’ve had a lot of good burgers recently, and there’s certainly nothing wrong with good – it’s like winning a silver medal – you’re not going to turn it down!

First things first, it involves going to Chelsea. I can absolutely understand why Elvis Costello didn’t want to go there, because I don’t either, except for this greatness.

Chelsea is the kind of place where you see people dressed in the same outfits as their dogs, where sunglasses are bigger than heads, where nannies, butlers and housekeepers still exist, and where massive off-road vehicles hurtle down small flat streets carrying their heavy loads of one person (two if you count the chauffeur).

So I won’t be hanging around. A quick in and out. But tucked away, quite invisible unless you know where to go, is the Admiral Codrington.

I wouldn’t say it’s a traditional London boozer but it’s probably as close as Chelsea gets to such a thing. Dark wood pub area in front and small but bright restaurant area in the back.

Now, on some London-based burger websites, a degree of murmuring is made over the fact that the original creator of the AdCod cheeseburger is no longer here (I understand he consults for Byron now). I’ve had this burger both before and after his departure and it remains great.

It’s evolution. Without it, we’d still be in the oceans, not eating burgers. The current Chef has admirably stamped his mark on a classic.

I arrive early and have a drink in the bar area. It’s quiet and there is a well-heeled christening going on upstairs. Everybody at the AdCod is really friendly and my table in the restaurant is ready.

I carry my drink through and am left to settle in, no rush, no pressure. A lovely place.

My drink, by the way, is a Czech Pilsner called Krosovice. Never had it before. It’s bloody marvellous.

The owner is, unsurprisingly, a pub company, but the chef Oret is a genius, putting together my burger magnificently. He kindly lets me take a picture of it on the grill.

I hear his deep voice yell “service!” and the waiting staff head to the kitchen. Here we go!

It’s been cooked medium (I was asked) and has a neat brioche bun, cheddar, bacon and slaw at the bottom. No gimmicks, just burger perfection.

The bacon is hidden under a generous melt of cheddar and the burger sits on top of the house slaw.

The burger patty is a marvel of beef. On the grill it doesn’t look special. Just a burger on a grill. But it’s outstanding.

The seasoning beforehand and preparation after cooking are what turn this into the world’s best burger.

The slaw provides a substantial slop to sit on.

This isn’t entirely a “dirty” burger but it’s not exactly clean on the fingers either. The cheddar gives it the characteristic bite and bacon, well as we know – bacon makes everything better.

As I was tucking in, wondering how this meal could possibly get any better, AC/DC’s Thunderstruck appeared on the stereo.

Getting further in, there was some degradation of the bottom bun. Not total – it still held its ground, but it did succumb to the sloppy slaw to a point.

The AdCod burger looks small, but the meat is thick. It’s perfectly cooked and is very filling. I suspect that’s partly a symptom of the brioche – a more filling bun than other types.

This is a burger worthy of worship. It tastes utterly perfect. In my view if it were possible to epitomise the perfect cheeseburger, this is it.

After my burger was finished, I had the pleasure of spending a few minutes chatting to Chef Oret.

He didn’t overlap with the Fred Smith era and as such the burger is essentially a different being. The meat, instead of Angus, is now West Park, from Dorset, and the slaw is entirely Oret’s own creation.

He also heads a pub in Mayfair called the Punchbowl, which is due to reopen soon. It will have its own menu (and burger) created entirely by Oret.

He has worked for the Savoy and Gordon Ramsay in his decade in the UK (he’s originally from Jamaica) and given the strength of his creations and his menus in the two kitchens he runs, this chef is one to look out for.

Before I leave, the infectiously cheerful manager Siobhan briefly chats about the pub and her role in growing the business.

It’s a great team, with a great menu, and of course a great burger.

Admiral Codrington, I salute you.