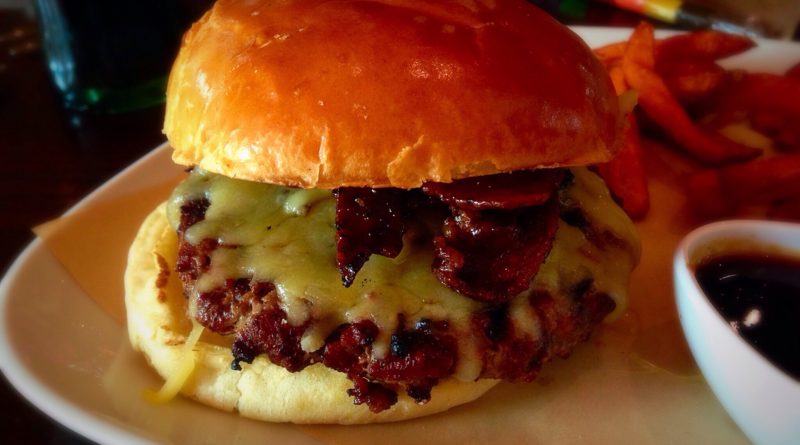 Our 7oz flame-grilled burgers are made with prime cuts of beef from the British Isles. We use chuck steak for flavor and beef brisket for tenderness. All burgers are freshly grilled to order and served on a glazed brioche bun with fresh tomato, red onion and crispy fries.

I seem to be gradually working my way through the TGI Fridays handcrafted burgers menu, slowly working up courage to attempt the Monster.

That day wasn’t today as something else caught my interest. The Double Glazed Jack Daniels Burger.

Now, A-rated double glazing is pretty much de rigueur in the housing market these days, but on this burger I couldn’t quite work out what was double about it.

It came with a little pot of smoky glaze, which I assume is one of the glazings, although I’m not sure if it counts as being glazed, either singularly or doubly, if the glaze is on the side and nothing has yet been glazed.

The brioche bun was also glazed, as are all the buns in the range. This was very obvious from the shine and I’ll come back to the bun later. Perhaps the bun counted as one of the glazings.

The bacon was candied, not glazed, but the sheer shininess of it suggested to me that glazing and candying were similar.

So, who knows? I was in first at 12 noon, but I’d learned from the last visit that that didn’t mean service would be quick. It was, as ever, polite and friendly and fun, but not quick. I put in my order and waited a while.

I’d upgraded to sweet potato fries again. I won’t take up your time covering those, as you can read about them on the Bruce Lee review.

They caught my eye as the plate arrived. The brioche bun was served with its top hanging off, which seems to be a “thing” at the moment. Just like beards.

It’s a heavy bun TGI has gone for. Noticeably yellow, which presumably is the egg in the brioche, and very shiny. It’s a good choice.

The innards of the burger were odd in a way.

The key ingredient here was surely the glaze, and it wasn’t actually in the burger. Without it, it was basically just a bacon cheeseburger. I took a bite without the glaze and established that right away.

But before I slopped the glaze in there, the bacon was quite unique. Candied essentially means very sweet, very crispy and very shiny.

It was all these things in abundance. And what have we learned about bacon, boys and girls? For the answer, see the bottom of this review.

It was good though. With such a thick chunk, I could see from the cross-section that it had a good amount of fat, and therefore taste. Not the best, tastiest beef burger I’ve ever had, but a very competent choice.

At this point, it’s important to note that the burger would have been, quite simply, too dry without the glaze, so I really can’t understand why it’s served separately.

The other ingredients, Mayo and cheese, were visibly present, but with all the sticky sweetness going on, I cannot honestly say that I tasted them at all.

This particular burger is listed on the menu as being the house favourite so, although it was quite enjoyable, I’d probably have to disagree with the house. It was neither as tasty, nor as interesting as the Bruce Lee burger. 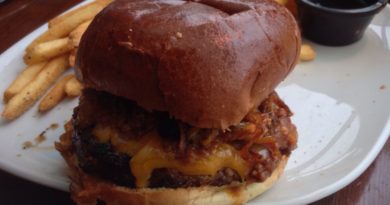 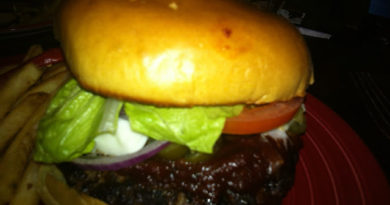 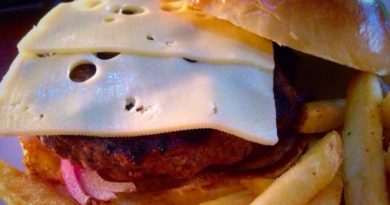