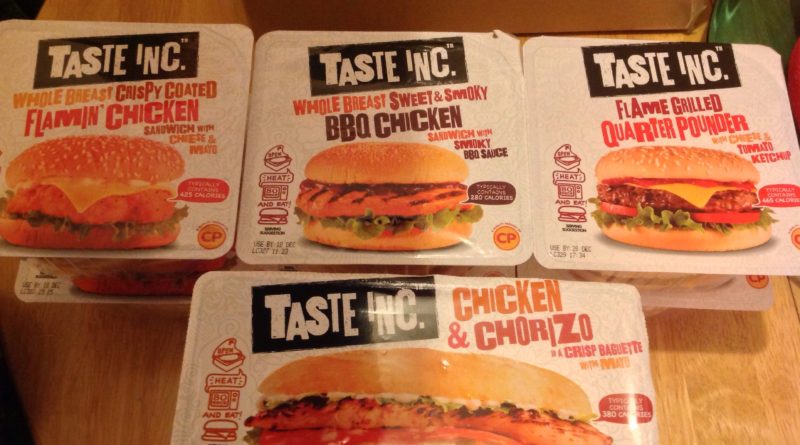 Here at Taste Inc. we want to seriously shake up microwave snacking to deliver an incredible-tasting experience for kids and adults alike. Our range of healthy quick and easy microwave snacks includes subs, microwave burgers, hot dog and baguettes has been developed to taste incredible. Ready in just 90 seconds in the microwave, all products in the range contain fewer than 500 calories, so what are you waiting for? Open, Heat and Eat. It’s incredibly simple!

Food snobs and gourmet burger lovers look away now as we do a Taste Inc. test and take a glimpse at the products sent to me recently by Laura et al. at Taste Inc. Burger Lad® is no stranger to freebies having previously received a signed copy of ‘More Takeaway Secrets’ from author Kenny McGovern when I did the Mega Burger recipe from his first book.

I was very pleased to have been contacted asking if I would take a look at a selection of Taste Inc.’s range and one Friday morning a considerably large box with eight freebies arrived at Burger Lad® HQ. So is Burger Lad® a corporate sell out? This quote from Krusty the Clown in ‘South of the Border’ from The Simpsons came to mind:

Krusty: (gasps and sobs) They drove a dump truck of money up to my house! I’m not made of stone!

Now… is there a subject more taboo than microwaveable burgers? Everyone I know turns their nose up at the mention of them. I must admit having sampled a rival company’s product when ripping out a kitchen during ‘A Nightmare on Cypress St.’ but it’s been easily six years since I had one last.

I remember having one at work now and then when I would get The Commissioner for Secret Menu Items to stand guard while I hurriedly used the communal microwave in case anyone discovered my shame. But why do these products get such a bad name?

My Biopic Executive Director could never fathom microwaving the bread and meat together – I’d say to him “toast the rolls then if you are feeling posh.” And when I mentioned this particular review to “Burger Bev” she made some sort of convulsion but that may be due to having spent an entire week in the same office with me.

With another commonly known microwavable burgers website claiming their brand is worth £79m these figures are not to be scoffed at. Someone however, is scoffing these “meals” and the good people at CP Foods and Taste Inc. decided Burger Lad® should sample their newish range as they want a (cheese) slice of that convenient cash (they launched their range in the UK in May 2013).

So are these a serious alternative to cooking “proper” burgers (remember The Burgerator checked out the Heston and GBK Waitrose burgers) or are they best left to the demographic of young males doing nothing better than sat around playing GTA V on their Xbox all day? We shall find out now as first up is the Chicken and Chorizo in a crisp baguette…

Olé! Fancy a taste of Spain? Then our Chicken & Chorizo Baguette is the one for you. Ready quicker than you can log on to the net to check out a trip to the Med! This incredible tasting snack sees whole tender chicken fillets flame-seared, then combined with slices of smoky paprika chorizo and mayonnaise (optional) in a crisp baguette.

Firstly I am confused – this says “typically contains 380 calories” but a check of the website confirms this is in fact 380 calories per 100g. But then I can’t remember if this was 100g in total or not… Anyway I am not dwelling on this so let’s move on.

Do you know what? This was pretty tasty actually. The dominant flavour, as expected was the chorizo and I did wonder how microwaved bread would be crisp. It was a bit limp but after a while it firmed up (ooh err). I guess this is what the paper/card sheath was for to give that bread some protection?

The chicken breast was a fairly decent standard and overall much better than I anticipated. I only put one sachet of mayo on it which I found to be more than enough. But this was a good and promising start to my Taste Inc. tale…

Up next we have the Whole Breast Sweet and Smoky BBQ Chicken – at this point I would just like to put on record that I did not eat all of these on the same day!

Fancy a real taste of BBQ goodness but don’t have the time to heat up the coals?  Then check out our Sweet and Smoky BBQ Chicken Sandwich.  The whole tender chicken breast fillet is marinated in a smoky BBQ sauce then given a tasty chargrilled finish and served in a soft maize-topped bun with a sweet and smoky BBQ sauce (optional).

This was alright and the meat looked OK for a low priced, convenient snack. It was cooked in 80 seconds and you are advised to let it rest for an additional 30 but I recommend leaving it a little longer. The chicken had black, flame-grilled score marks on it and there was no lettuce as pictured on the packaging.

The bun wasn’t too soggy and the BBQ sauce was very sweet and did have a smoky essence but on the whole enjoyable. I didn’t like this one as much as the previous entry but again this was decent enough.

I think I may have tried the other company’s Chicken equivalent a long time ago and from memory the Taste Inc. version was certainly a better quality!

People will turn their noses up at these products but not everyone can afford to splash the cash on £10+ burgers. I only heard on the radio the other day about a generation of children not able to cook for themselves – does this sort of product help the situation or make it worse? I’ll leave that debate for someone else thanks!

And these are pretty safe as after pub/club snacks. A friend of mine once put a pizza in the oven after an intoxicating evening out only to wake up hours later surrounded by smoke and a cursing Dad! At least you won’t face this dilemma with the Taste Inc. range!

So we then turned our attention to the Flamin’ Chicken Sandwich…

Love the taste of Flamin’ Chicken, then check out our zingy tasting take on the classic, which sees whole chicken breast in a hot and spicy coating, served in a sesame seed bun with tasty cheese and mayonnaise (optional).

Now I enjoyed the Flamin’ Chicken Sandwich. This came with a sachet of mayo again and cheese and combined they made for a pretty tasty snack. The chicken breast meat was of a good standard I am pleased to report and as you can see from the cross-sections below was pretty respectable.

The burger itself had a surprising little kick to it which I believe is held within the crispy coating. I actually thought this was such a good standard I would buy and/or recommend this product. The buns go a little soggy after being in the microwave but tend to firm up after a while but in terms of taste and quality this is pretty good.

What does make me chuckle is how Taste Inc. feel their audience need to be told how many seconds one minute and twenty seconds is in total (80 if you didn’t know).

What always concerns me about these products is the long fridge life on these things with some of them being approx. three weeks. So what is in the ingredients to make this meat last that long and is it good for you? Do you think I am going to delve into this topic further? Sounds too technical and scientific for me and after all this is the Taste Inc. taste test.

The Flamin’ Chicken Sandwich is definitely the best of the bunch and I would recommend it to anyone looking for a microwaveable, convenient snack. The breast meat is surprisingly good and it does have a cheeky little spice to it. And on that optimistic note it was the Flame-Grilled Quarter Pounder Burger which would be our last product taste test. But how did it compare to its poultry pals? We’ll take one last look at that Flamin’ Chicken – thanks Taste Inc. that was pretty good!

So finally the Quarter Pounder and for that you can catch a festive episode of Burger Lad® TV below but first let’s take a look at the pictures.

There’s nothing quite like the satisfying meaty goodness of a Quarter Pounder Microwavable Burger to stamp out those hunger pangs!  The Taste Inc. burger, with its juicy, seasoned, flame grilled beef, tasty cheese and tangy tomato ketchup (optional), all encased in a soft sesame bun, will satisfy those cravings.

OK I opened the box for this one and got hit with quite a strong smell which I assumed was the flame grilled flavouring. It was neither pleasant nor unpleasant but it was noticeable and I got the beef and bun in the microwave for 80 seconds while listening to my Intrada Home Alone soundtrack (Christmas is coming!).

The smell intensified as the microwave counted down… 5-4-3-2-1…beep! Here we had come to the end of our Taste Inc. test so how would the beef component hold up?

It was OK… I can’t say I enjoyed it that much to be honest which was a shame after the high standards set by the other products I had sampled. Out of everything this had the fakest taste and texture and I struggled to eat it.

I don’t want to dwell on the Quarter Pounder too much as I don’t want this tastetest to end on a sour tasting note. Overall, I was pleasantly surprised with the standard and flavours of Taste Inc.’s products so don’t let this final point put you off – the Chicken & Chorizo Baguette and Flamin’ Chicken Sandwich were pretty bloody good!

Here is our latest episode of Burger Lad® TV:

I’d like to take the opportunity to once again thank Laura and everyone at Taste Inc. for sending these product samples over. I’d certainly like to have tried the Piri Piri Chicken Sandwich so think I’ll pick one of these up next time I see them in a supermarket.

I’ll certainly keep this letter in the vaults at Burger Lad® HQ. This has been a lot of fun and those chicken products are definitely worth a try!

One thought on “Taste Inc. Burgers”