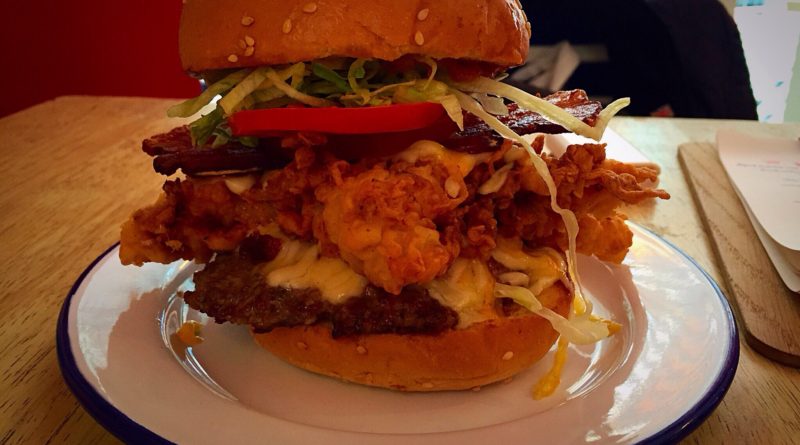 Splendid Kitchen is one of a number of relatively new places in Manchester, forging ahead with exciting new food and updated takes on classics.

Stepping into Splendid, it is wood and chipboard decor with red and yellow chairs and a bluesy soundtrack. It’s all very cool and it’s in a prime spot in the city centre amongst Manchester’s civil servants and law firms.

The latter, I presume, are responsible for the seemingly endless stream of large shiny (i.e. non-muddy) off-road vehicles. Ready to tackle the notoriously hilly terrain of central Manchester, I’m sure.

Anyway, I’ve missed the start of Splendid’s special burger day – on Wednesdays they’ll have five burgers on sale (but only in the evening).

No matter, they are also well known for their fried chicken, so I have settled on the Cow and Chicken, which is probably exactly what you’d imagine it to be.

Yep, it’s a beef patty, a chicken thigh and all the burger toppings.

Bacon, of course, tomato relish, mayo, lettuce, gherkin etc. No cheese. And looking at the four burgers on the regular menu, there’s no cheese on any of them.

I like my cheese so that’ll be something to overcome, but hopefully the chicken is juicy and the relish and garlic mayo make up for the cheese absence.

I was just having the burger today, because I’ve seen the pictures and it’s big. There is, however, a good selection of sides. A whole array of fries – pizza fries, splendid fries with sausage pieces. There’s also a separate Mac and Cheese menu.

As I waited, I saw a couple of other dishes being served. Eggs Benedict among others. Now, I dislike eggs with a passion (right up there with fresh tomato and mushrooms), but the presentation looked great.

I was really looking forward to my burger by this point.

When it arrived, looking absolutely jaw-dropping, the first thing I noticed was that there was in fact cheese.

Either I missed it on the menu (which had been taken away by this point – I wonder why all restaurants do that?) or it wasn’t written down. Doesn’t matter, it was a nice surprise.

I bit into the chicken – how could I not, it was sticking out all over the place. The bubbly golden breaded costing looked awfully inviting and it tasted even better. Crispy initially, then melted in the mouth. I suspect considerable development has gone into perfecting this.

Inside the coating was a big chicken thigh and if anything, it was even juicier than I had imagined. Really, really tasty.

With such fantastic chicken, it might be forgiven for overshadowing the cow part a bit. And it did, in terms of size. A thick chicken thigh versus a thin 4oz beef patty. No contest.

But this beef patty punched above its weight. Despite its thinness, it was still lovely and pink in the middle and when I got a bite of it on its own, it was as good as any burger elsewhere.

Flavour-wise, there was the sauces and the gherkins working together to keep it robust, and of course the bacon, which was quite mild but very crispy. Chewy even.

The lettuce was very generous and did add a bit to texture, if not taste. There were two large slices of tomato in this, which I took out because I didn’t want them to spoil it.

Finally, on sauces, I’d been offered ‘sauces’ at the start but declined. I wonder what options were available. I might have chosen a chilli sauce if there was one.

One small issue with this burger was the lack of a lasting kick in the flavours. It was very soft and welcoming and demanded more bites, but seemed to disappear too quickly.

It’s personal taste. I don’t necessarily like stupid things like Naga and Ghost and all these other ridiculously hot things, but a hint of heat is never a bad thing.

Finally, the bun, although small, seemed to be well chosen. It was very “briochey”, and by that I mean substantial and with that classic yellow hue.

So overall the verdict is good. Splendid is such an understatement when describing this place. So British.

Yes, it was splendid, but it was far, far more than that. If this was in Texas, it’d probably be called Awesome Kitchen. 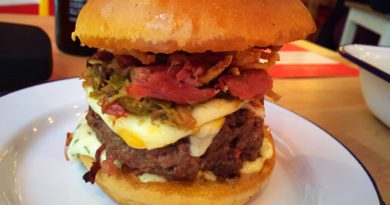 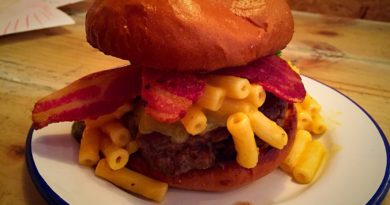 One thought on “Splendid Kitchen Cow and Chicken”