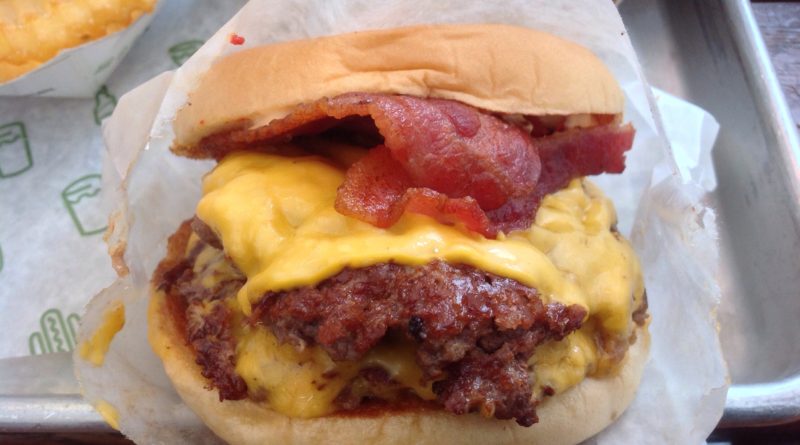 For those people that don’t know the story, Shake Shack started out as a hot dog cart in Madison Square Park.

Due to its popularity it soon opened up a permanent kiosk and has since spawned approximately 35 US locations dubbing itself the modern day “roadside” burger stand.

Shake Shack arrived in London in July 2013 with a bit of a fanfare. If memory serves me correct it was around the same time Five Guys also arrived in the UK and both “chains” stirred up a bit of a frenzy with people queuing for ages to sample these latest US burger imports.

We were in town for the McDonald’s My Burger finals where your very own Burger Lad® was one of twelve finalists but we’ll talk about that experience another time.

We headed to Covent Garden on Saturday afternoon and despite my insistence that I wasn’t fussed about getting a burger I must confess I really wanted to try one of the capital’s offerings.

Through the slight rain and hoards of people, like a Cyberdyne Systems Model 101, my eye caught the Shake Shack logo. My pupils must have dilated like the red eye of the aforementioned killer cyborg. TARGET.

Heading in the direction of the fast casual restaurant I batted people out of the way like they were rag dolls, the sound of the ominous T-1000 theme playing through my mind.

OK so we’d not been to Shack Shake before and looked slightly lost to begin with.

You basically go in through one entrance that isn’t obvious at first, grab a menu and place your order. Someone did try and push in front of us but hey… this is London. Anything goes…

I opted for the SmokeShack™ and with the single at £7 and the double at £10 I thought I’d go with the double option. After all this was a bit of a celebration…

I was a little surprised we weren’t asked if we’d been before (you know when you go somewhere like GBK or Nando’s the staff ask if you’ve been before). But this place was RED HOT MANIC!!

After ordering and paying we were given a small electrical fob style device and tried to find a table.

Inside the historic Market Building, Shack Shake has a modest sized seating area “outside” and a limited number of tables inside. Luckily we managed to score a table in another section of seating and were thankful it was covered due to the pissing down rain.

After a relatively short wait my device buzzed. Off I went in search of burgers! I waited near the collection window and as soon as my tray was brought out I was told I couldn’t carry it myself due to licensing laws (yes I had a cider!!).

Back at the table I looked at the Double SmokeShack™ – the only thing that confused me with this burger was the fact that I assumed the cheeseburger came with lettuce, tomato, pickle and onion and that the menu described this as a cheeseburger with the additional items. I did say to hold the tomato but oh well, it still looked pretty epic.

We filmed our latest episode of BLTV which you can see below, you’ll have to excuse the noise but even at 3pm it was still ram packed inside/outside!! Always a good sign.

Now this burger is effectively a bacon double cheese with the chopped red chilli peppers and ShackSauce on-board. And I must say that at £10 it is pushing on the expensive side (alright it is London) but my goodness it was worth it!

I think for this review we’ll look at the individual components separately before giving an executive summary at the end.

Patties – these are top quality, juicy and some of the best tasting beef I have had recently.

You can taste the freshness and they are moist, practically dripping over your fingers with goodness (but not greasy) but packing a delicious flavour that left me wanting more. MORE!!!

In fact, writing this now I would have one in an instant. They had been cooked to utter perfection with just the slightest of pink colouring to signify just close to medium.

Yeah good – I’d recommend stopping by if you get the chance as you won’t be disappointed by these beef beauties.

Cheese – there was a good amount of cheese on the SmokeShack™. To me it looked like two slices of the classic American variety which just oozed over its beef host and melded everything together perfectly.

Every bite you took gave you a faint but pleasurable taste and I found myself eating this in no time at all.

Bacon – again this was premium quality. Really smoky but not to the point of being overbearing. I loved the way it had been cooked today.

I’m not a fan of crispy bacon and this was just bordering on crispy but still floppy enough so that it didn’t feel like you were chewing on a piece of jerky or similar.

I’d definitely recommend trying this option if you like a quick kick to your burger.

ShackSauce – do you know what? I’m really disappointed with myself that I didn’t try this component on its own.

It was a sort of Big Mac style sauce but not as “strong” but with more a tang. What I can tell you it is seductively moreish and complimented all the ingredients on this bacon double cheese.

Buns – no attempt at being fancy here. Just a classic bun which coped admirably with all its inner beauty. Fresh, springy and no gimmicks required.

I would go as far as to say this is definitely the best Bacon Double Cheeseburger I have ever had.

We ordered a side of fries to go with our burgers and although I have never been a fan of crinkle cut fries these were pretty damn fantastic. My only grumble is that the only dipping sauces available were ketchup and mayo so we passed.

And having not been to a Shake Shack before did not realise they were located along with the serviettes (I was expecting these on the tray). But I suppose it makes sense… we’ll know next time!

The Shake Shack Double SmokeShack™ is not the biggest burger in the world and at £10 you might feel like you’ve not filled your belly like you’d wished. But I promise you, in terms of flavour this is a very, very good burger!

Juicy, moist and full of flavour – you can really taste the quality. I can see why the place is so popular and it won’t surprise me if we see more popping up in the future.

Oh, one of the pictures you will have seen some pickles in it – I’d pinched these off Miss Milkshake as despite conquering her phobia of gherkins these were just too big for her… so “missing out” on my salad items I gladly had them! 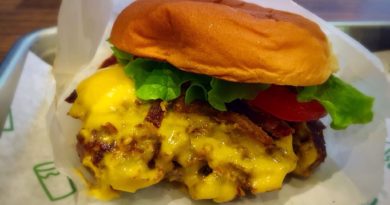