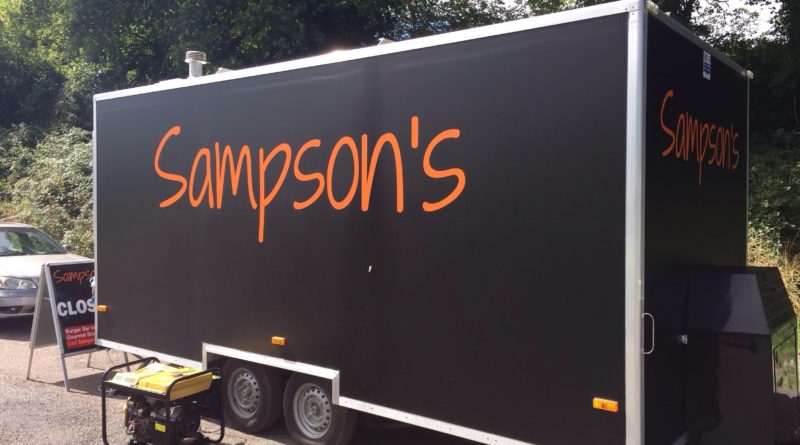 A couple of days ago I received notification of a burger/snack van or food truck if you prefer receiving some attention for the quality of its burgers.

Now although we recently appointed our PBC the title of ‘Executive Street Food Correspondent’, because of the location of Sampson’s Burger Van it was down to Burger Lad® to take on this assignment.

You see this particular street food supplier is tucked away on the A38 between Worcester and Droitwich and long-term readers of Burger Lad® will know this is within close proximity to BLHQ.

And judging by the press this food truck is getting I was in for a treat.

Not only has it made the local paper – The Worcester News (Twitter followers will remember we had a write-up a few months earlier) but The Times also call it a ‘Michelin Star Takeaway’ – tough talking from The Times indeed but a statement I found out later Carl didn’t exactly agree with.

So how would this road-side burger van fare being reviewed by the best UK burger review website…!? We’ll find out shortly.

Carl Sampson is the owner/Chef and on Tuesday 24th March at 8:00pm you’ll be able to see him on Channel 4 in the first episode of a new series called ‘Burger Bar to Gourmet Star’ – the synopsis for this show being “Some of Britain’s best chefs train up some of the country’s worst to try to pass as seasoned professionals in world class kitchens. Burger-van owner Carl is first to give it a go.”

So the thought of a local, independent food truck serving up great burgers and featured in local and national press and on mainstream TV was too much of a good opportunity to pass up.

I checked Sampson’s Facebook page and noticed that on Saturday they stop serving at 2pm.

Luckily for me there was a mobile number and having already tweeted Carl saying to expect us this weekend I just dropped him a text saying we’d be pushing it to make it to him for 2pm.

Like a true Gent, Carl replied almost immediately and said he would hang on an additional 30 mins so we wouldn’t miss him. Excellent… I really could not wait to road-test his burgers.

When we arrived at his pitch on the A38 there was already a crowd of about 8 or 9 people waiting for food. I later found out business has been booming since The Times article and Carl has had a number of record-breaking days for sales including today.

I went to place an order and was told by one of the three man operation they had sold out of everything!!

Luckily for me, Carl had saved me a burger and once the hungry crowd had their food and dispersed we got chatting.

The smells wafting from the flat top style grill filled the roadside air and upon further inspection I could see the patties – these are not precision weighed but clock in at approximately 6-7oz. But damn they looked big!

And in true US diner style they were cooked with disposable aluminium cloches over them. The advantage of using this is to keep moisture in and prevent the meat drying out but also to enable the burger to be cooked properly throughout, thus avoiding burnt edges and raw insides – especially important when dealing with this sized patty (and food health inspectors!).

The patties here are interesting. Carl’s philosophy is to keep them “uniform but not always the same” – in fact, I drove away after sampling this delicious cheeseburger thinking that they reminded me of classic smashed burgers. Onto the burger…

They are big. Not thick but big in circumference and you’ll not go hungry after eating one of these. Carl’s been doing this for two years now and it shows. He has created a tasty patty which has a strong flavour of onion in it alongside some good seasoning which gives the good quality meat he uses a real depth.

To me, it “sort of” tasted like a traditional burger van burger but with that onion twist, almost like a “trendy” onion burger. But in a good way and very enjoyable! I couldn’t fault it.

Today mine had Cheddar which was melted into a gooey goodness (Stilton was also an option) and dressed with spinach leaves and two good fresh red onion rings which also contributed to that onion taste – I held the fresh tomato as you know I’m not a fan.

Overall, it was a good burger and I’m really glad I took the time to drive up from BLHQ.

I’d like to see some more sauce options as I believe there was only mayo and ketchup on offer but that’s just my own personal preference.

Considering there was no sauce on this burger it remained juicy (but not greasy!!) and I can see why they had sold out for yet another day.

This really does re-define the definition of a drive-thru and with plans of a new van (twice as big as the current one) in July, sales going through the roof and cranking out tasty and honest burgers then keep your eyes out for more to come from Sampson’s.

They currently offer pork rolls and the ubiquitous breakfast items of bacon and sausage but these could disappear in the future as Carl focuses more on the burgers.

In fact, he told me about some of his ideas including a fantastic sounding chicken option but I won’t reveal that until we (hopefully) review that one too.

Keep up the good work Sampson’s and thank you today for a cracking burger and a chat about my favourite subject.

In the meantime, we’ll leave you with one last look at their very commendable burger van cheeseburger and stay tuned as we’ve got some major reviews coming your way soon… 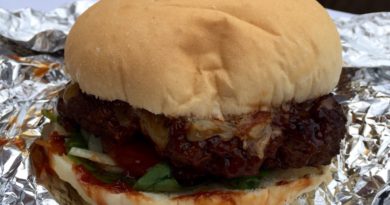