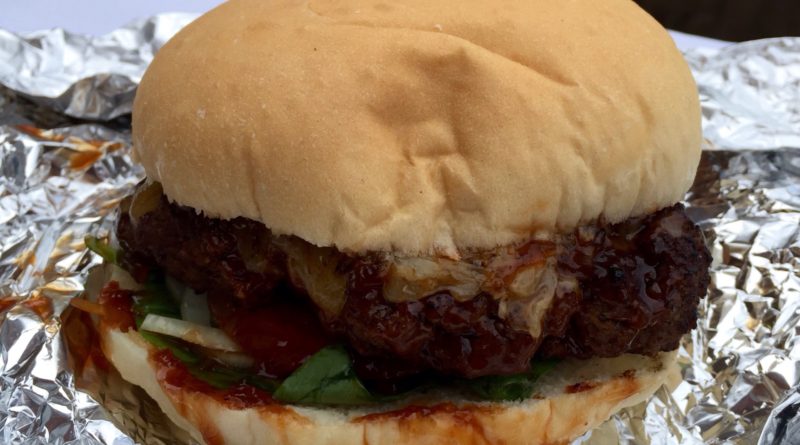 Introducing what could be a world beater – THE SMOKED SAMPSON. “It’s an original Sampson but smoked with apple wood and hickory, then topped with the new and very popular Sampson’s burnt onion, fire smoke sauce”.

Back in March, Burger Lad® paid a visit to Sampson’s burger van, parked on the A38 between Worcester and Droitwich, off the back of a review in the Times newspaper, calling it a “Michelin star takeaway”.

This, combined with Carl Sampson (the owner and proprietor of the van) just having starred in Channel 4’s “Burger Star to Gourmet Star”, resulted in a favourable review.

Since March, Carl has been back to the drawing board, twice and launched two new burgers – today’s review is of the latest, The Smoked Sampson.

Note – I have eaten the other burger, the Chinese style and it is amazing and cannot recommend it enough – the faux noodle dressing (made out of cucumber) is simply inspiring. But back to today’s burger.

Sitting at home today whilst off work, I was debating what to have for lunch.

I then got a tweet to myself and Burger Lad® asking if we wanted to try the new Smoked Sampson. Choice made.

Arriving at the lay-by on the A38, you can’t help but notice Carl’s brand new burger van – this thing is an absolute monster and is spotless (and recently awarded 5 Hygiene stars, which was 1 more than a chip-shop I went to the other day!).

Walking around the front and Carl was busy serving a customer and all-day breakfast (which he is thinking about retiring off the menu in favour of adding more burger lines).

After finishing with his customer, he started cooking my burger. This is the original recipe which BL® reviewed, with a couple of modifications.

Firstly, the sauces have been replaced by a homemade BBQ sauce, and secondly the burger itself is smoked in a brand new smoking unit, using applewood and hickory wood chips.

You don’t see this on a burger van – in fact you don’t see a lot of the techniques that Carl uses here on your normal burger van.

The patty (made fresh) is pressed into shape and put onto the grill, whilst being covered with a round foil dish, which helps to keep it moist.

During the cooking, Carl makes up the bun, using spinach, onion and tomato, as well as his own BBQ sauce. Towards the end of the cooking of the patty, he covers it in grated cheese and using a blowtorch, melts it, before transferring it over to the new smoking unit.

After paying the £5 (which is an absolute bargain), I raced off, back down the A38 to Burger Geek Base to try this monster.

First of all, this is a huge burger – much bigger than what you’d get from McDonald’s or BK and just about hold-able in one hand (and I have large hands, not that I’m boasting).

I’m not going to go into too much detail with the build itself, as it doesn’t differ too much from the original one previously reviewed.

The patty is thick and topped with the gooey cheese. I tried some of the BBQ and it blew me away – there is a sweetness running through it, with a small amount of heat in the background. The sauce has an almost sticky, velvety quality to it, which remains on your lips as you are eating the burger.

There is also the crunch in the sauce of the finely chopped onions running through it.

On the first bite, even before I crunched down into this, you get the taste and smell from the smokiness. This is the primary taste in this burger, with the BBQ sauce cutting through it afterwards and a small amount of the cheese.

Even though this is the same burger as the original, the two enhancements are enough to completely change the taste, into a true smoky taste that you only wish from other burgers (see McDonald’s BBQ Smokehouse).

I can pretty much say that this burger didn’t last long, and boy was my face a mess during and after it, with the BBQ sauce all around my lips. I didn’t care – it is a fantastic sauce and one to be tried (Carl said that there is a possibility of it being bottled up in the near future).

There is only one really negative thing to say about this burger, which isn’t a deal breaker but one that I think Carl can make a small tweak to change.

I think that the smoking process here actually dries the burger out a little bit so I did experience a bit of dry roof of mouth during the consumption of this. Not enough to take away from what is an amazing burger, at great value.

I’m really looking forward to seeing what Carl serves next – he always seems to have a few ideas on the go and I just hope that he doesn’t try and run too fast, but launches new flavours and ideas slowly and perfects each one on the way. 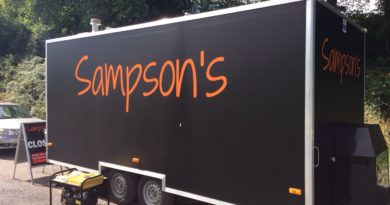