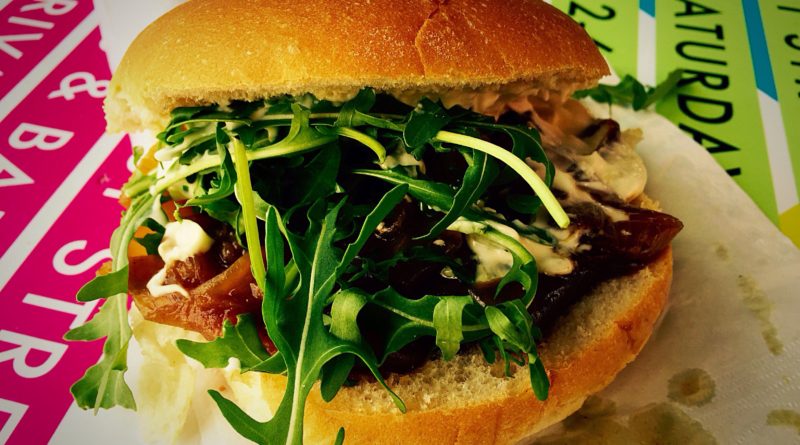 Safari Grill has been offering great tasting safari burgers at markets, food festivals and events throughout the UK.

Street food is buzzing, isn’t it? I thought I’d check out Urban Food Fest, originally in London and now in Manchester too.

Unfortunately at 6pm on a Saturday it was not buzzing. The lady at the excellent beer stall, Offbeat Brewery, couldn’t explain it but was hoping it would be busier later.

It’s a shame, because there was a good selection of traders, including Safari Grill. I do hope it became busier and buzzing later on.

Safari Grill sells burgers of the more exotic variety. Ostrich, Kangaroo, Buffalo. That sort of thing. BurgerLad.com is the most comprehensive of burger review sites so I jumped right in.

Chef’s recommendation was the Kangaroo Burger, and the choice of mayo was sweet chilli or Stilton. Again, he recommended the stilton and it’s always good to go with the recommendation of the person cooking your food! Onions were also applied.

Now, this is street food so we are looking for lashings of taste but not necessarily huge sophistication.

The patties were already cooked and waiting in a large sort of pot. My kangaroo one was picked out, put in a bun and toppings added. Service was lightning.

I diverted to the Offbeat Brewery to check out the tremendous selection of beers on offer, again taking a recommendation, and sat down to enjoy my beer and my burger.

The pot method, whilst unexpected, was certainly hot enough. Also, the bun seemed to be quite well chosen. I don’t think it was from an artisan bakery or anything like that, but it did the job.

And the onions, liberally applied, gave a nice tangy sweetness to it all. Its counterpart, the mayo, was well selected and I appreciated chef’s recommendation for the juxtaposition of sweet onions and savoury stilton. The two distinct tastes worked well together.

But you don’t get a kangaroo burger to talk about the toppings, do you? How about the meat?

Well, firstly I’ve no idea how you’re supposed to cook kangaroo, other than tying it down, sport. It’s a heavy, gamey meat though, not a light option.

The taste is robust without being overpowering, but I think it’s the hardness of the texture that stands out the most. Dark on the outside and heavy throughout. The patty may be quite small in circumference, but it most definitely felt like a meal.

It’s a very unique flavour as you’d expect, but quite dry and the moistness of the toppings were absolutely needed. I could imagine kangaroo as a steak requiring considerable gravy.

I absolutely love the concept of Safari Grill and the choice of product is unique and exciting. I just wonder if the presentation of burgers and toppings would benefit from a little more development.

Finally, I think the notion of cooking patties in front of the customer adds an immeasurable sense of freshness and being part of the fun of street food. It may not add anything to taste, but perception is everything.

If you can catch Safari Grill at an event near you, you must. They clearly know their stuff and have a really unique offering in this often saturated burger world.