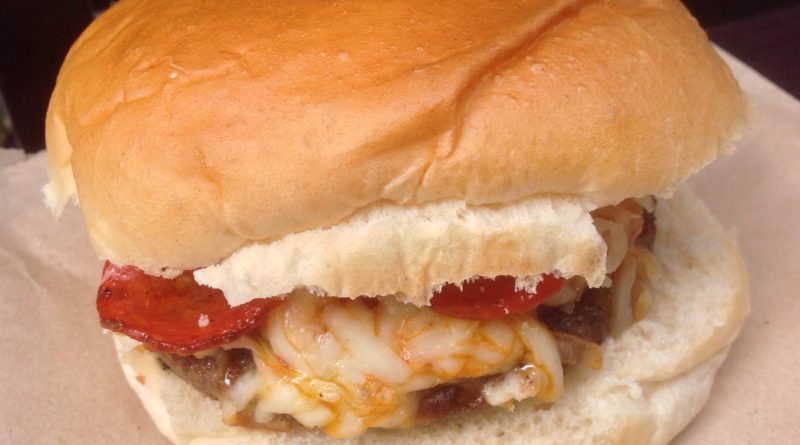 At Roly Poly our signature street food dish is our 8oz homemade burgers. Using only English beef and dry spice mix’s to give our burgers there unique taste. See here at Roly Poly we go against the grain! We don’t believe that using only 100% beef with salt and pepper gives you the best burger (its not a burger that’s a mince meat steak) Don’t get us wrong we only use beef in our burgers but we have a proportion of dried spices and salt to give our burgers there definitive taste.

We were back in the Faithful City for the two-day Worcester Foodie Festival being held on the first weekend of August.

Although not originally listed on the Food & Drink Stallholder Listings I had a sneaky suspicion Roly Poly would be in town. You see I’ve been waiting approximately 18 months to get my hands on one of these burgers…

Disappointingly at Christmas (2014) they were only selling hot pork rolls and more recently after a trip to Atomic on the Saturday, I passed on the opportunity of travelling to Gloucester Food Festival to complete the quest. Today this would change…

I had seen a tweet or retweet about Roly Poly being at the Foodie Festival so was really very much looking forward to trying one of their burgers… they sound incredible!

Boasting an impressive sounding menu they offer a wide range of tastes including jalapeños, halloumi, chorizo and avocado but there was only ever going to be one for me!

Today I would be trying the Pepperoni Burgizza – served with Tomato Pizza Sauce, Mozzarella Cheese and Pepperoni. Sounds cracking!

I was stunned by how quickly my food was ready! Literally I stumbled on how to say “burgizza” (which I still am) and with a slice of a bread knife and a quick wham bam I was handed my burger and my pocket was considerably lighter.

Eight pounds lighter in fact. The reason it was so quick is that it had already been cooked and was sat being heated waiting for someone to give it a home. I was happy to oblige…

Now as you can see from the first picture they say “served in freshly baked Brioche Buns with crisp salad” but this certainly was not brioche and there was as much salad on my burger as you’ll find on Epic Meal Empire. I’ve only noticed this retrospectively otherwise I would have said something.

I was so hungry and nursing just a slight hangover so after a few photos on the cuff I bit in. mm mmm good. Loved the pizza sauce, really loved it!

It had that rich, smooth Napolina-type taste and would not have been out of place in an upmarket pizzeria.

Now if the cheese was Mozzarella it was definitely the pre-grated stuff and it hadn’t really melted much. But it was enjoyable, worked well with the fantastic sauce and the five slices of slightly smoky pepperoni. It did as it said, it was a pizza burger.

Now after a fair few bites something didn’t feel right to me and that Ladies and Gentlemen was the beef patty.

The texture to me just did not feel “gourmet” and I had to break a piece of it off to check out what was the cause of my concern.

It tasted and felt like a frozen store-bought burger. That sort of texture you’d associate with the Birdseye range.

It’s hard to describe but it really did not feel homemade. In fact, I actually asked the young lad who served me and he assured me it was homemade.

I tell you what, if the objective was to replicate a frozen cash and carry burger that is a step-up from your typical chip shop or burger van patty then this succeeded very well. And at a whopping eight pounds you’d really expect something of a better standard!

But then the average Joe probably would consider this to be gourmet. I can reel off a list of names that offer burgers in this price region that are in a different league to this: Longhorn Burgers, Loxley’s, BurgerWorks, Dorset Burger Co., Real Burger, BBQ’s & Brews spring to mind.

I really wish today would have been a better experience as I really wanted to have a good burger.

It was a great event and Roly Poly had a premium pitch but I’d hate for people to walk away from it thinking this was gourmet.

I’d classify it as one step up from a typical car boot sale burger van. Of course, despite all the great food stalls in Worcester the queue for Greggs still stretched out into the street. What can you say!?

The Roly Poly Smokey Chipotle Mayo & Jalapeño Burger looked incredible and at £6 I wish I had of gone with that option now but I fear it would have suffered due to that patty. Shame.

We’ll leave you with one last look at the Pepperoni Burgizza, which on chalkboard promised so much but in the end did not truly deliver. And… at £8 I spent the rest of the day wandering around the city feeling truly disappointed with my purchase.