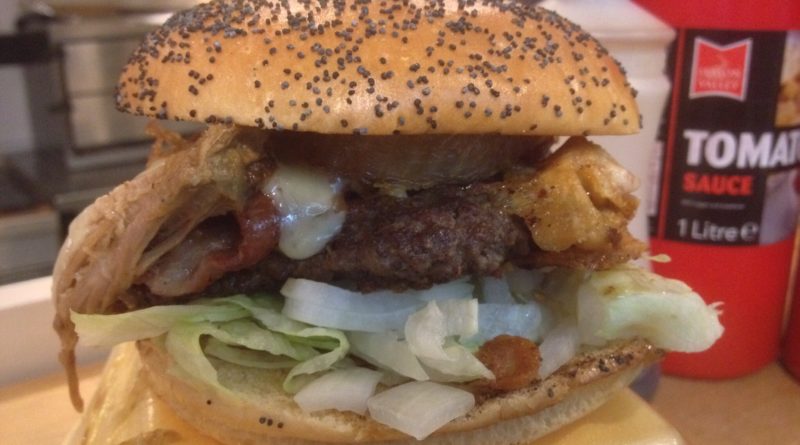 Riks Takeaway create handmade delicious burgers all sourced from around the West Country.

We were in Ilfracombe for Miss Milkshake’s birthday as she is especially fond of the seaside… and seafood in particular. I’d said there were no burger joints at our mystery destination and that there would be no reviews.

Of course, I had to research the town just in-case there was a burger worth checking out and the recurring name online was Riks Takeaway. And… it just happened to be a stone’s throw away from where we were staying…

The only other problem (apart from the fact I had said there was going to be no burger analysis on this getaway) was Riks Takeaway is only open from 5pm (apart from Mondays when closed and 4pm on a Sunday) and we were only in Ilfracombe for one night. It meant going for dinner and then getting a late-ish burger after.

I’d popped my head in just after opening to introduce myself to the guys, take a more detailed look at the menu and give them the heads up that we would be in later. The menu is quite vast here with an array of beef, chicken and veggie burgers. Riks Takeaway also do Hot Dogs, Meat Rolls, Chicken Wings, Pizzas and on a Sunday… takeaway Sunday Roasts amongst other things.

It’s an enormous selection of food and in my opinion, probably too vast, but I guess they are trying to cater to as many customers as possible. I asked if the patties were made by hand or bought in and the response was positive – they use a local butcher for all their meats and the patties are handmade on the premises. Despite my initial semi-promise to Miss Milkshake I vowed to return.

Later on in the evening, we returned to sample Little Riks Burger priced at a reasonable £5.95. This is the smaller brother of The Big Riks Burger which basically contains two of everything compared to the “Little” version which contains one beef patty, bacon, pulled pork, brisket and an onion ring. Sounds canny that… but how was it?

In a nutshell it’s a grade or two higher than your typical late night, post-pub stodge. That might sound astonishingly unfair but hear me out. And I’ll offer the guys at Riks some constructive criticism which could change their pretty good burger into somewhere burger aficionados would want to visit.

The patty – I watched one or two of these being handmade from scratch and in all honesty I was enthusiastic about it. Being a seaside town, I thought they’d cheap out and opt for frozen cash and carry patties but they don’t at Riks Takeaway and they’re proud of that fact too.

Like I mentioned above, they use a local butcher for their meat and should be commended for their efforts. What let this down was the over excessive usage of salt on the beef. It was really, really salty and they should take a read of Wicked Good Burgers

to re-visit the seasoning they use on their patties. Unfortunately, the salt levels in Little Riks Burger were bordering on unbearable and will be my lasting memory of this burger.

Bacon – this was certainly adequate, but again contributes to the saltiness of this build. It’s the sort of burger that is great when you’ve had one too many at a nearby pub and fancy a late-ish night takeaway feed to soak up the alcohol but boy did I need water in the night after this.

Next we have the pulled pork element and this is pretty uninspiring in 2016. It was cooked decently and had that signature, sweet-ish flavour but again, sort of got drowned out by the salt overload.

Walking around the town I saw a few burgers on menus such as The Gourmet Burger at Espresso Seafood Bar and Grill, a selection at Alfie & The Kaiser and another tempting sounding offering at an establishment whose name eludes me now.

Without trying all of these (remember we were only in town for 24 hours) I can’t discredit some claims I have seen saying that Riks Takeaway does the best burger in town. But I doubt it… and even then, if they do, there’s not a lot of competition.

I loved the beef brisket though and this was melt-in-your-mouth and felt like the best component of the Little Riks Burger. The only trouble being that overbearing saltiness from the patty which was a shame.

Not in the description, but there on the build was a thick wad of melted cheese. And this was proper cheese too, not your plastic American cheese slice variety. Pretty good.

And finally, the onion ring. Not bad but pretty greasy. And that’s the other adjective (alongside salty) we had for this burger. Greasy.

Sauce you can add yourself from a mightily impressive range of counter sauces and relishes and when you order you are asked which salads you prefer which is commonplace in this sort of takeaway – tonight I opted for lettuce and onion. Obviously no tomato…

At £5.95 in a seaside town such as Ilfracombe you might struggle to find what we’d call “gourmet burgers” whatever that means these days? But Riks could be onto a winner here. They really could.

They are offering burgers which are made from scratch, using locally-sourced West Country ingredients and have HUGE potential housed in a prime location, just down from the busy harbour. The only downside is that this is takeaway only. But that doesn’t rule out a different premises in the future…

Lads – if you are reading this, you really have the opportunity to do something for the town and make your place THE number one burger joint in Ilfracombe.

What we encountered this evening, were two people passionate about their business and the ingredients they are using. You just need a few tweaks and a little refinement to really take your burgers up to the next level.

If it was me, I’d ditch some of the menu and focus more on the burgers as it looked like you were a little overwhelmed with the variety of orders coming in. The time it took from placing our order to receiving one burger reinforced this.

The burgers are also presented in a generic Styrofoam carton which could be improved with some Riks Takeaway branded burger boxes. It would shift this place from a late-night post-pub destination (a guy walked in asking for a kebab which they don’t do but you can understand why) to a proper burger joint.

To summarise, Little Riks Burger is packed full of meat but is let down by an overly salted patty and the excellent beef brisket suffers by being drowned out by a tag-team of salt and grease.

Riks Takeaway in Ilfracombe is only in its infancy and has scope for improvement. Ditch some of that over-crowded menu, work on the burger seasoning and whatever you do, keep those buns you are using and next time we pop in there could be a reversal in fortunes. Let the newly opening “Pizza Pizza” have the pizza market and don’t worry about taking a market share of the Sunday Roast/Carvery business.

The printed menu has www.rikstakeaway.co.uk listed but as of writing this does not work. 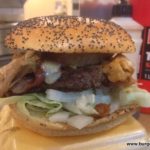