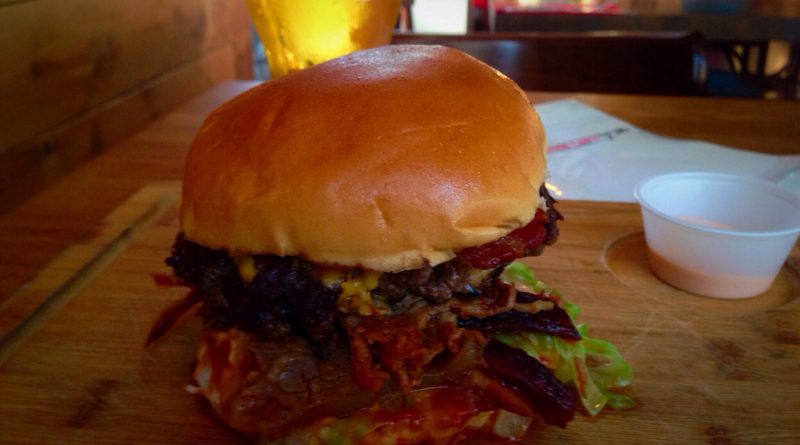 Our award-winning smoker has been imported from the USA and is built to recreate the cooking process of those original fire pits.

We use the traditional American woods of hickory and mesquite to give a full smoke flavour, and the meat stays in the smoker for up to 16 hours. Choose fat ‘n’ juicy 6oz or smash ‘n’ grab 2 x 3oz patties. With 16 hour smoked pork butt, applewood smoked bacon and American cheese.

The Red Dog Saloon is seemingly well known in the bearded hipster area of Hoxton, and now they have a new branch called “south” in Clapham, and it’s there, over the river, that I’m headed.

The reason it is well known, on the internet anyway, is for its meat – Burgers and ribs.

And fame is aided in no small amount by The Devastator, apparently legendary in these parts.

The burgers on the menu come as 6oz – either a thick patty or two thin ones.

Only with the former can the cooking be requested as anything other than well done. I suppose it makes sense – very hard to medium cook a thin 3oz patty.

So, for that reason, I feel compelled to order The Punisher (one step down from the Devastator on the menu).

Partly because it has a 6oz patty which I can have cooked medium, and partly because it includes an underlay of pulled pork – something our commander-in-chief Burger Lad® is very fond of.

Speaking of which, the Devastator Challenge, which involves devouring the Devastator, fries and a milkshake in ten minutes, I’m quite sure would present no problem whatsoever for our fearless leader.

Today the Admiral is having the Punisher. Essentially a thick bacon cheeseburger with pulled pork. Yum.

It arrives on a wooden plank and the first thing that hits me is the smell. Meaty, cheesy goodness.

With the first bite, there’s a bit of slide and I get only pork. But my god, it’s good!

The burger as a whole is a bit of a beast. The bottom bun is already degrading with the sauce and I know it’s going to be a challenge.

I pick up a few errant bits of pork with my fork and reconfirm that it is indeed bloody tasty.

Overall, I wouldn’t exactly say it holds together. It’s a dirty beast and it is itching to get out of its cage.

Less than halfway through, I’m proved right as the pulled pork escapes entirely.

But this gives me two glorious meals in one. The fantastic BBQ pork on one side, and the bacon cheeseburger on the other.

So as hard as it is setting the pork aside, let’s get to the beef.

Cooked medium as per my request, with a crusty barbeque grilled outside, this is an example of people who really, really know how to cook meat.

This beef perfection, with the cheese and sauce attacking it from both sides, is fantastic. It’s hard not to start imagining the next bite before the current one is finished. So, so, so good.

As we know, bacon makes everything better and this is no exception. It comes through loud and clear with every bite.

This is a very good burger, and makes me realise that all the other burgers on the menu are also very good. Therefore, as a burger destination, Red Dog Saloon gets a big fat Burger Lad® thumbs up.

Gauntlet down, next time Burger Lad® himself visits the capital – the Devastator Challenge…………