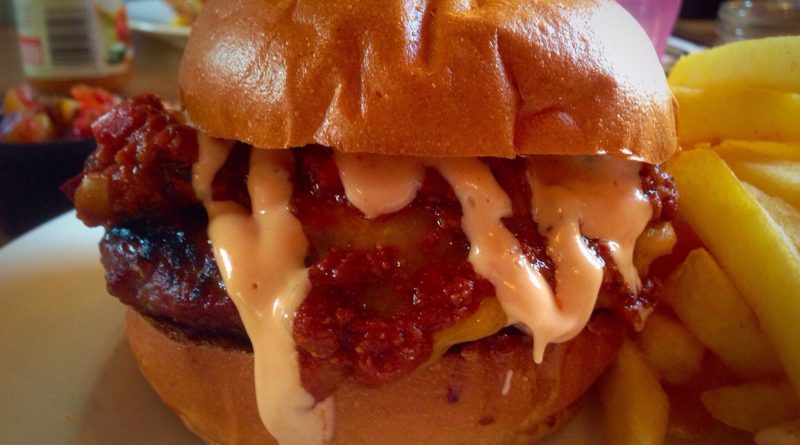 Our original 1st premium burger. Burger topped with our chilli, bacon, melted cheddar and Rascals own sauce drizzled over it.

For anyone who has never visited, this is by far one of Britain’s most beautiful towns. Overwhelmingly populated by tourists, students and golfy folks of course, but really old and unique.

St Andrews has been on the Burger Lad® radar before, with a contributor to the website having had Rascal’s Meat Feast burger, and it looked fantastic.

Considerably more sober than the previous visitor was that day, the fleet sailed up the stairs to Rascal’s with burgers in mind.

The Admiral ordered a Sloppy Rascal which is a single (but substantial) burger, covered in cheese, bacon, chilli con carne and a concoction known as Rascal’s Sauce (ketchup, Mayo, mustard and sweet chilli).

Warspite had a plain chicken cheeseburger, while Valiant bravely opted for the Ultimate Bacon and Cheese, the latter of which was quite massive.

Both old Seadogs said they really enjoyed their burgers, but this review is concentrating on the Sloppy Rascal.

Commodore Junior had chicken goujons while Little Miss Dauntless had some stuff in a jar, followed by bits of everyone’s brioche buns, most of which was thrown on the floor.

Chilli slopped on top of a burger is something that comes up quite a lot these days, but for whatever reason I’ve never tried one.

Why forever not, I cannot imagine, for it was amazing.

The combination of melted cheese, the chilli and the pretty lovely Rascal’s sauce was, frankly, delicious and well-named.

Sloppy doesn’t even come close. And the bacon, well of course bacon makes everything better, not that this one really needed to be made better.

Back-tracking a bit, the time from order to service was quite long, and the Commodore particulate doesn’t really appreciate much of a wait for his food. But that was swiftly forgotten when it arrived.

The place has a nice layout and finish. I suspect it’s more family oriented during the day and probably a bit of a student haunt in the evening.

Students are spoiled these days, and seem to have far more cash.

In the Admiral’s day, burgers were either fast food or a pub grub afterthought, and students didn’t drive cars, wear Barbour, or go to expensive coffee shops, yet all of that was present in St Andrews today. Times change I suppose.

So, the Sloppy Rascal. The description for all the burgers said the house style was to cook medium-well, and it’s a good choice.

I’d have gone for the more medium end, but was happy to go with their recommendation. All the staff were very friendly and helpful.

The bun of choice is brioche which, despite the gloop of this particular one, did an outstanding job holding together.

The beef was rather nice. It was quite a thick, but compact patty. Not necessarily the finest beef I’ve ever had, but perfectly fine for this.

It has been prepared just as described- medium well, with just the faintest hint of pink towards the centre, with the usual indication lines of grilling on the outside. Terrific!

The chilli was really tasty and every kidney bean felt like a treat. And, you know, I’d be more than happy to try that chilli by itself if that’s possible. It’s nearly as good as the stuff I whip up in my own galley!

The fries were really good. Not too thick, not too thin, and lovely and crispy. Valiant couldn’t finish them due to the sheer size of the double burger, but Warspite did, stating they were the best she’d had in a while.

The burger was messy of course, and quite a bit of gloop had to be rescued after escaping out the back door, but it was tasty, fun and very satisfying.

The bacon gave its trademark savoury hit and bounced around the taste buds with the little bits of beef in the chilli.

It’s too far to go regularly. There’s a branch in Edinburgh as well, but nowhere else in the country as far as I’m aware.

I think it’d do well in the likes of Newcastle, Manchester and Cardiff, but I’m not sure about London.

I’d thoroughly recommend Rascal’s through. There’s a very, very comprehensive burger menu, and even a food challenge for the bravest of the brave.

Thank you Rascals. The fleet salutes you! 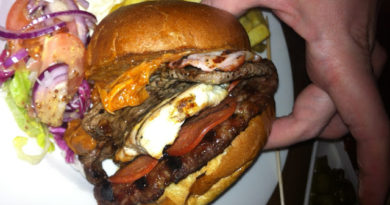