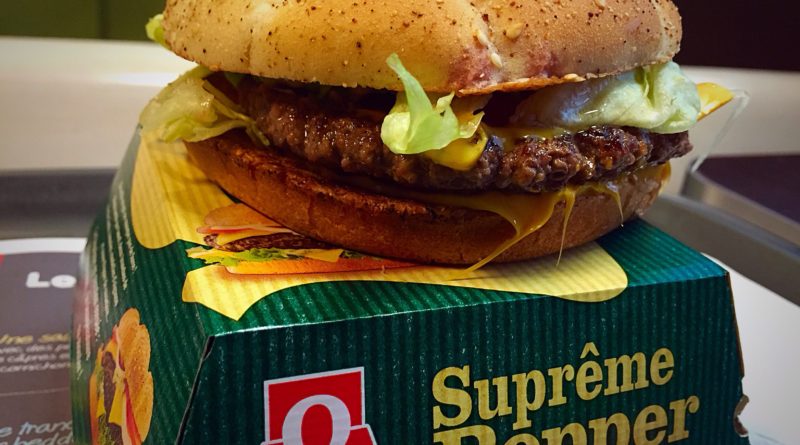 Quick is the leading European fast-food hamburger restaurant brand. Our history is a tale of taste and the successful adaptation of the American fast-food model to the habits and tastes of Europeans.

For the un-initiated, Quick restaurants was founded in 1971 and calls itself “the leading European fast-food hamburger restaurant brand.”

In Belgium, I get the impression that it is just as big, if not bigger, than McDonald’s. It also operates in France and Luxembourg.

They offer a comprehensive selection of beef and chicken burgers and the branch I was at, was spotless, staffed by very welcoming people.

A quick look at the menu and I settled on the Supreme Pepper, essentially a cheeseburger with a peppery sauce. I paid my money and was told it would take about five minutes. This was being cooked fresh.

After about that length of time, out it came on a tray. The Supreme Pepper has its own box which definitely makes it look like a more premium product.

Opening it up, I most certainly had the impression of a premium product. The top of the bun was seeded, dusted and creased. It looked like what one might call “rustic”.

The other thing of note was the diameter. This was a big burger, which was quite surprising given the price.

Inside, a patty with a similar diameter, some tomato and some lettuce. There was also lots of cheese, more it seemed than what you might normally get with fast food. It kept things lovely and soft.

The softness was also continued by the generous amount of pepper sauce which is what also gives this burger its signature tune.

It’s quite messy, right enough, as you’d expect. The peppery pep was slight but apparent. This isn’t a Ghost Naga Zombie Volcano Killer sauce of the sort that Burger Lad® eats for breakfast. It’s subtle and very enjoyable.

It’s pleasantly warming, reassuring me that I have indeed bought something a little different.

The beef itself was well suited. Hard to tell if it had been seasoned with salt and pepper due to the pepper sauce, but it looked and tasted a cut above average fast food fayre. Quite thin, as usual for this segment, but wide as I mentioned earlier.

I definitely liked it. Really nice cheesy, peppery warmth throughout and the lightly toasted bun with its “rustic” top was also good, especially at this price.

It may have been Quick, but it was also Quality.