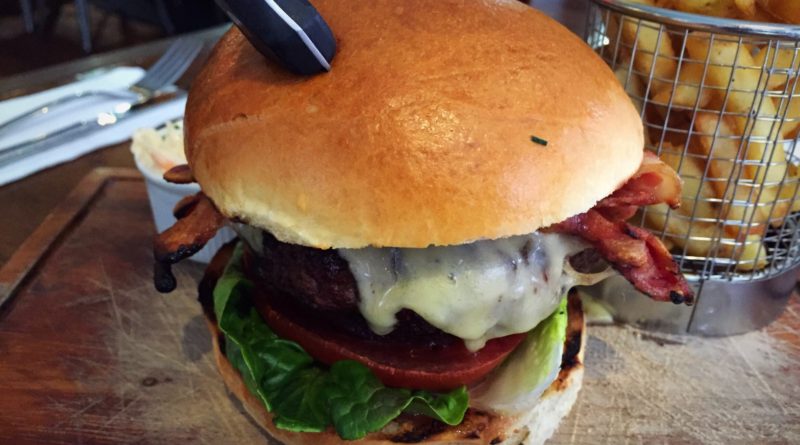 Review of The Pen & Pencil – Pen and Pencil Burger

Pen and Pencil is a new-ish opening in Manchester’s cool Northern Quarter.

As a place for drinks, it fits in very well in the area, with its small but bright interior, lots of bare brickwork bearing testament to the industrial past, and top notch service. I’ve certainly been in a couple of times for drinks.

Until very recently, I didn’t even realise there was a full food menu, let alone a “new” one, but apparently there was and there is.

It’s not a huge menu, and unless I missed something, there were no side dishes and no desserts. That does suggest that drinks are the main focus here.

That said, reading through some of the choices, there was clearly a lot of effort put into this, and on the face of it, quite impressive.

In terms of burgers, there was a choice between beef or chicken. Well, this isn’t a burger joint, so that’s fair enough.

Neither was particularly extravagant, but the chicken one struck me as a little bland, and I also thought the beef might be a better way to size up the place.

Besides, a burger with the venue’s name on it is effectively a signature dish, so that should reflect the menu quality as a whole.

What we have then, is basically a bacon cheeseburger with lettuce, tomato and balsamic onions. All standard stuff, and nothing stands out as being particularly unique.

That certainly isn’t a negative as some of the best ever burgers are the plainest ones, as long as they are done well.

With fries and house slaw included on the side, that’s a fairly respectable serving considering there’s change from a tenner.

With all burgers, and the plainer ones especially, it comes down to the beef. On this burger, there’s a fairly hefty 8oz steak burger (it doesn’t say what cut or anything about sourcing, and I forgot to ask). It is also stated on the menu that it is served medium – that’s a good sign in my book.

So when it arrived, in a well-presented stack, I set about investigating.

The house slaw, in a little pot on the side was creamy but not strong. Not necessarily the best slaw I’ve ever had, but perfectly adequate.

The fries, however, were more than adequate. They were more or less perfect, with a crispy outside, and fluffy interior, covered in more than just a few specks of potato skin. That’s how fries are supposed to be done. Not too thick, and not too thin.

The bacon, first of all, was US-style streaky bacon, rather than British style, and that’s in-keeping with the hint of American-cool about the place. That was probably the most interesting part about the burger.

A massive slice of tomato dominated the lower half. It looked the part, and many people like it. I’m just not one of them, although I have progressed from “I hate tomato in my burgers” to “I can take it or leave it”.

The bun looked reasonably well suited and was toasted on the inside – perhaps a little too toasted in a couple of parts. My other first impression was that the whole thing could’ve been a bit more generous with the cheese.

The bottom bun was a bit burnt if we are honest, and the over-done theme unfortunately didn’t end there.

I’m not convinced this patty lived up to its “medium” description and looked like it had been cooked a bit too long. With a bit of a squeeze, some juices came out, but there was no visible pink anywhere in the middle.

That said, it was quite tasty beef, with a piquant tone coming through ever so slightly – I couldn’t tell if it was from the seasoning on the meat, or from other burger toppings, but it was very welcome.

I was actually worried that the limited amount of cheese would make the burger over-dry but that simply wasn’t the case. There did seem to be a very decent fat content in the beef so I suspect this helped.

The bottom bun quite quickly went from overly crispy to soggy as it struggled to cope somehow, so the Admiral’s upside-down method had to be employed. This lets the usually thicker top bun take the strain and is a good way to prevent (in most cases) the use of cutlery.

In the bite, the streaky bacon was hard and crunchy, as it’s supposed to be, but the beef too was a bit harder than it should have been. Its exterior was noticeably dark and inside was quite a tightly-packed fine ground, making for slightly more work for my jaw than I would’ve liked.

The beef could probably have benefited from a coarser grind AND of course a more faithful adherence to the term “medium”.

As it was, it presented a fairly daunting wall of beef (amplified many times over by the fact that my friend sitting opposite me was enjoying a steak sandwich with beautiful slices of rare beef in it – those pink tones taunting me across the table).

The balsamic onions didn’t come through at all, and the reason I’m only mentioning them now is because I completely forgot they were there. I suppose they did help keep things moist, but taste-wise, I just didn’t get them.

About halfway through, the massive slice of tomato slipped out and I didn’t mourn its loss.

This burger, then was, at best a better-than-average pub-type burger that was reasonably enjoyable at the time, but fairly forgettable long-term. 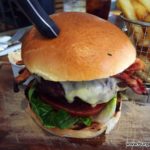