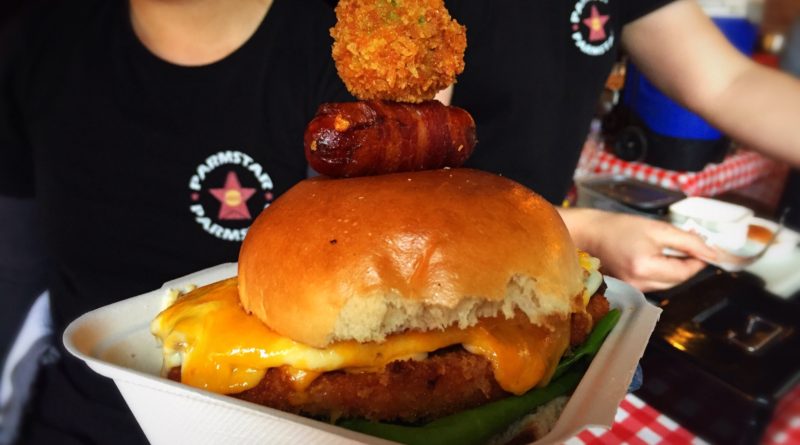 Parmo in a bun with sausage & sage stuffing, cranberry sauce, pickled slaw in a bun.

I’ve had a Parmo twice, and Parmstar has visited Manchester twice. This is not a coincidence! It is, however surprising considering how great a dish a Parmo is.

As you’ll recall from my previous review, it’s crispy chicken, covered in cheese (sometimes in bun). It isn’t the most complicated dish in the world. Of course it’s hard to produce a great example of a Parmo, such as the quality of Parmstar, but it’s still surprising that it isn’t more widespread.

The relative rarity of course is a good thing for the business model of John and Lisa (the stars of Parmstar) and it’s always an event having them in town. This time, I knew they were bringing their Christmas recipe with them so it was a question of pulling out all the stops and getting into Grub.

Speaking of which, this was my first visit to Grub’s new setup at Alphabet Brewing near Piccadilly. Every week, there’s beer, music and of course street food aplenty and I love it. Oh, and a roof too! After a brief chat with Grub’s fantastic Bailey and Jules, my stomach reminded me about the Parmo.

A short wait – these things aren’t made lightning quick, they are made with care and attention and there’s a huge amount of pride goes into the quality of product and service here (in addition a 5 star hygiene rating is proudly displayed).

The Christmas Special builds upon the regular Parmo bun (i.e. Crispy chicken, cheese, brioche) by adding a flat sausage and sage stuffing patty and cranberry sauce within the bun, and a pig in a blanket with a sprout bonbon on top. What’s a sprout bonbon, I hear you eagerly ask – well, it’s a breaded, fried sprout and done this way it’s considerably more delicious than the boiled type we had to endure many years ago.

I’m not much of a fan of burgers with things sticking out the top – I do feel the contents are better within the two halves of the bun, but I do recognise it’s a bit of a trend right now. Besides, the pig and sprout were rather nice and did add quite a bit of festive nature of this dish.

I recall the last time immediately falling in love with the juxtaposition of the chicken’s crispy coating and the soft floaty melted cheese and this time was no different. Instant comfort, I’d say this texture clash with its feel-good factor is the core of Parmstar’s offering and the other ingredients serve to heighten the enjoyment. It’s almost narcotic.

Presentation-wise, coated cheese-covered chicken in a bun is always going to be beige-heavy, but this dish takes some steps to counter that. Not least the bacon-wrapped sausage on top, but also the reddy hues of the cranberry, the two-tone cheese and bechamel. The latter of which covers the chicken so completely and so perfectly that the chicken cannot actually be seen until you’ve started eating.

The quality of this dish is set out plainly. The lightly toasted brioche is otherwise squashy and very fresh. Frankly, I’d be happy with it holding most things to eat, and the fact there’s a Parmo in there is a real treat.

The chicken I’ve mentioned in the previous review – despite being coated in crumb and lovingly yet comprehensively slathered in cheese, it’s as juicy and succulent as they come (someone please give me a new adjective to describe great chicken).

Inside the bun, the sole festive ingredient is the cranberry sauce. Compared to the cheese and bechamel, this is applied a little more conservatively and as such, does not immediately make its presence known.

That situation doesn’t last though and when it comes through, it’s both subtle and sweet. They’ve really thought this through, having clearly paid attention to the principle of “too much of a good thing”.

Cranberry sauce on savoury dishes is a staple of festive specials these days, but if care isn’t taken with the quantity it can over-sweeten and overpower a dish. Not here. It knows its place, and plays its part well.

Obviously having picked off the sprout and sausage (that’s the main grumble with external burger toppings – they don’t end up forming a part of the main experience), it was left to the cranberry sauce to dress up as Santa and do the whole Christmas thing on behalf of this Parmo.

Well, almost, but not quite. There was the small matter of the flattened sausage and sage patty that was sandwiched in here.

Sage is one of my favourite herbs and literally shouts savoury amongst any dish to which it’s applied. It’s hardly a Christmas-only ingredient though, so the fact that it has commandeered this market is terrific.

This particular patty, flattened to fit well inside the bun, was rather special. My teeth burst through it between the soft cheese and the crispy chicken and its flavour as well as its positioning within the stack are both well-selected.

As I said at the start, this isn’t an awfully complex construct, even with the festive extras, but it could so easily be done badly. A tougher type of bun, slightly overcooked chicken, less generous chicken, a crumb that didn’t retain its crispiness so well – the list goes on but any one of those could result in a very underwhelming experience.

Fortunately, Parmstar seem utterly focussed on providing our stomachs with the best possible example of this regional delicacy and I for one was extremely close to ordering a second one after I’d finished.

And given Parmstar’s immense popularity (a direct result of a top product combined with faultless service and jovial personalities both on- and offline ) they’ll be around for a long time to come, hopefully with exciting specials in tow. 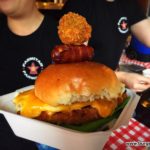 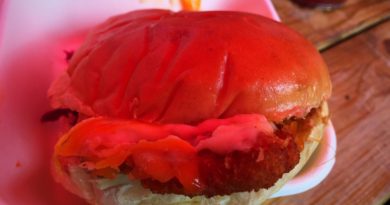 One thought on “Parmstar Christmas Special”