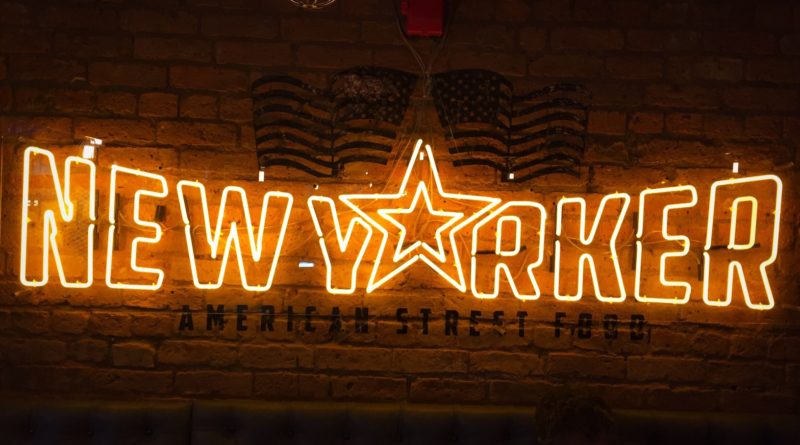 New Yorker Diner has been on the radar for a considerable time. I originally noticed it as “opening soon” back in the spring, just by walking past, and kept my ears to the ground.

My poor ears remained on the ground for six months as the original opening period came and went (contractor issues, I’m told). Americana is hardly a new “thing” in Manchester but done right, there’s always scope. And in this case, the location is an interesting choice.

Portland Street, on the fringes of Chinatown, is probably better known for a couple of chain pubs and some cheap late night takeaways, so it won’t take a lot for this New Yorker to be a cut above.

That said, by the time the new opening finally came around (with a strange lack of fanfare), I didn’t have huge expectations. I must say that’s entirely due to the photography on social media.

The location is in a basement, and the lighting is very yellow. That combined with the relative plain-ness of the offerings, doesn’t lead to terrific pictures (as you’ll see from my own through this review).

However, before I get wholly stuck in, let me just say that these expectations were exceeded and I did like the place.

When I walked in, it was the start of lunchtime and was fairly quiet. It filled up quite quickly though and seemed to be doing decent trade with a largely young crowd.

Why do 20-somethings in groups need to play YouTube videos out loud on phones when sitting in a group? Hugely irritating for anyone else – what’s wrong with, you know, talking to each other like normal people?

Anyway, that’s the clientele, not the venue, and inside the yellow hue was very noticeable. Whilst you wouldn’t necessary want clinical bright white, I’d certainly be inclined to brighten the place up a few lumens.

The menu above the counter is a little cluttered and took some explaining, including the lunchtime offer which wasn’t actually on the menu at the price offered today (£4.99). Half the counter is also the dessert area and they seem to have identified this as a key offering. In addition to burgers, there’s chicken, hot dogs and that sort of thing.

I opted for The American Boy, which was essentially the cheeseburger, and its patty has the name “smashburger” which I’m sure I’ve heard of before… hmmm. Putting the order in I’m told there’s an extra 30p for eating in, I’m given a buzzer contraption and asked to sit and wait until it, well, buzzes.

Service was a little unsure of itself, not untypical for a new opening with staff learning to operate the EPOS, but friendly and welcoming enough.

Four of us sat at a table staring at these things waiting for them to buzz, and one of my friends was all geared up to video it when it did. Social media, what can I say…

So it buzzed, and off I went to collect my burger (a bit like at Shake Shack). It was well wrapped, overall well-presented and I was really looking forward to it by this point, not least because mine was the last of the four and I could see and smell everyone else’s food first!

First impressions were that the fries were well seasoned with some Cajun dusting and nice and crispy – well made, and that the brioche bun was strong, squashy and well suited. At this price point, it’s hard not to imagine that either the fries or the patty or both are frozen and/or bought in from elsewhere.

The patties are described as “hand smashed to perfection” but of course it doesn’t say where these hands are doing the smashing. The kitchen behind the serving area looked quite small. At any rate, I didn’t ask, partly because it was rather busy as we were leaving, and partly because I enjoyed my meal anyway.

This American Boy (you know, I’m really not sure about the name, it sounds clunky and wouldn’t be my first choice) is a typical US cheeseburger with tomato, red onion, lettuce, pickle and Monterey Jack taking the cheese honours. It also has a “Brooklyn sauce” whatever that means, which was nice enough.

Overall, there was a good balance of flavours with each ingredient playing its part in a very respectable build. On the eye, the lettuce was clearly generous, and while the cheese could have been better melted, it did the job well enough.

Although I wasn’t asked, the patty was cooked pink, which isn’t necessarily everybody’s choice. I was happy with it though. I believe the meat is also Halal, which again isn’t everyone’s cup of tea, although it didn’t seem to affect the taste.

Back to that “Brooklyn” sauce – it gives off a little heat which works really quite well with the pickle to make this above-average-interesting. Pickle, eh. Who’d have thought… the Admiral eating pickle and liking it.

A couple of years ago Burger Lad® told me I would eventually come to enjoy pickles, and I chuckled. Well, I guess BL® gets the last laugh because he was right (albeit I wouldn’t want LOADS of them).

I digress, where was I? Ah yes, sauce and pickle. Yes, there was no dryness in here, and whilst it’s not a “dirty” burger, there’s plenty of moist goodness to enjoy. The heel did a fine job of keeping everything in though and, as I said, the bun was well suited.

All in all I was impressed. What we have here is a decent brand, not the most original in the city as a whole but a cut above in its chosen location. Added to that is reasonable food, reasonable prices and well-prepared dishes.

I would say, that in terms of the branding, you’ve got “gourmet” on the wrap, “Diner” in the name and “street food” in the subtitling… whether it actually hits all, or any of these notes accurately is open to interpretation, but I’d say that the offering is closest to the likes of Smashburger (perhaps that explains the terminology chosen for the patty….) and that’s not a bad thing at all.

New Yorker Diner is not necessarily a destination burger joint but I would go back, probably tuck into that dessert station next time too… 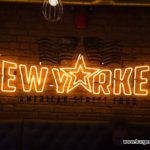