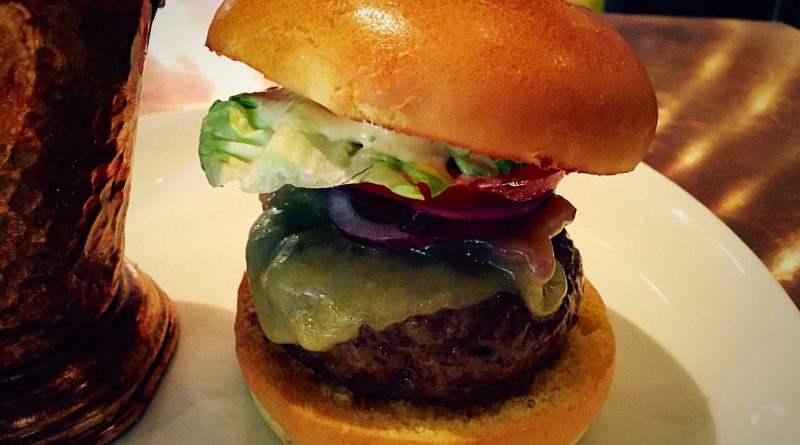 This is a fancy restaurant. You can tell by the website and the large-ish unit in upmarket Spinningfields tells us the kind of clientele it is going for.

As far as I can tell, it’s part of a small but growing empire of similar places across Greater Manchester, run by young entrepreneurs of the sort who are utterly transforming the city’s food scene.

And it does a burger of course. On the lunch menu it is £12 and comes with parmesan truffle fries.

Sitting down, I take in the decor which probably suits the people it’s aimed at. It’s half high-end restaurant – fine teal and yellow leather seating, proper ironed napkins, well-uniformed waiters.

Because of the placing of the kitchen and bar area, the sort of squashed L-shape, the use of dividers (including some strange gold poles) and a split-level, I’m not sure this is making the best use of the space available.

I’m also not sure it’s the sort of place I’d come to if it didn’t do a burger, but I’ll reserve judgement. In fact, even as I write this, I’m warming to it.

The waiter was very helpful and attentive, although he did tell me his name four times throughout the experience. I put my order in and was asked if I wanted the meat cooked pink or well done. Pre-Burger Lad®, I’d have said well done. Now I know better.

My table was beside the kitchen serving hatch, so I caught glimpses of the good-natured but well-regimented work going on in there and regular calls of “service” reminded me of the television programme “Burger Bar to Gourmet Star”.

As burger arrival time neared, the waiter bustled about and moved the napkin out of the way. Something I could just about manage myself but a nice touch nonetheless.

I’m guessing the staff have also been told to do some marketing because I was given a leaflet about afternoon tea and another one about Sunday roast. Fortunately I wasn’t asked if I wanted a PPI refund.

Anyway, my burger arrived looking like a master class in presentation. Shiny brioche bun, good size of greenery, red onions, a large slice of tomato (will be removed), glorious bacon and cheese and a fabulous looking thick patty.

Yes, I was definitely warming to the place. In a way, it sort of reminded me of Browns, which is one of my all-time favourite chains. Albeit a slightly more hipster version of Browns.

Time to get eating though. After a third person came to ask if everything was OK (once is sufficient), the original waiter came back, having noticed me writing in my notebook, to tell me some more about the burger. Interesting stuff that isn’t always forthcoming.

The patty, from Yorkshire, is a rump and chuck mix, with a 70/30 fat blend, which certainly explains the taste. I’ll get to that shortly. He also explained that they butter the brioche then stick it under the grill to get the shiny, cracked effect that looks so inviting.

Inside the burger, they’d gone for the classics, no gimmicks, which is great.

The tastes were all quite subtle and did what the toppings on a great burger should do- complement and accentuate the taste of the beef.

The house mac sauce, as it was called, was delicious and more than just a little reminiscent of a certain high street classic. The sauce, with the melted cheese, perfectly cloaked the thick patty. The red onions were a good choice too, adding a bit of crunch and that distinct sharpness to the tongue.

So, a well-chosen and prepared bun, good vegetables and an excellent sauce. That brings us to the meat. The bacon didn’t stand out. A fantastic bacon can sometimes be too eager to steal the show from the beef, but that didn’t happen here. The bacon was lovely, especially covered in the cheese, but there was no doubt about who the Boss here was: the beef.

This was a revelation. The patty had been cooked textbook medium, the thickness was ideal to show it off inside the bun along with the other ingredients, and the flavour, oh the flavour, will linger in my memory for a considerable time.

This was perfect beef. I can well imagine owners and chefs sitting for hours trying different cuts and blends and fat ratios until they came up with this one.

It was slightly salted and so melty and meaty, I absolutely loved it. Utterly fantastic stuff. I’m really beginning to run out of adjectives. It’s not often I’d ever want to order a bunless burger with no toppings (pretty much never, actually) but it’d definitely be worth considering for this beauty.