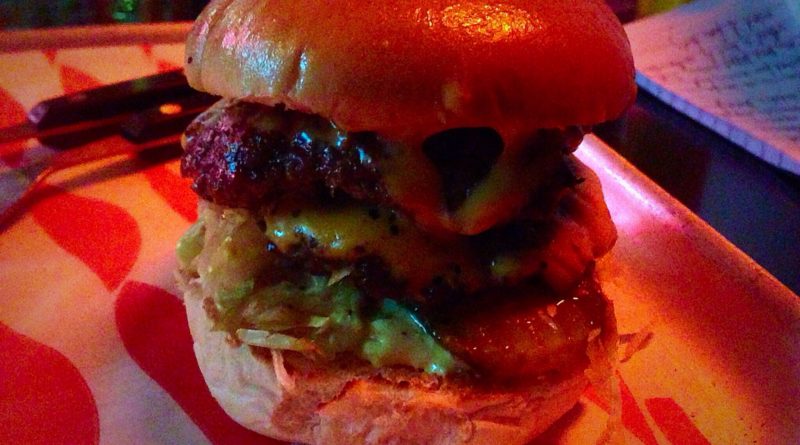 Another legend on the London burger scene, MeatLiquor and its sister ventures such as MeatMarket are well known for their creations.

If I’m to believe the online hordes, one burger in particular stands out above all and that is the strangely titled Dead Hippie.

MeatLiquor is located just off the main thoroughfare of Oxford Street and as I wait next to a big sign advertising studio apartments at Blackfriars from £1,080,000, I can smell the meat emanating from the door. Whether that is on purpose or by chance, who knows.

Doors open at noon on the dot and there is all manner of queue-related instruction notices on the door. Clearly this place can get very busy!

I order a Czech craft beer which comes with a frozen tankard. A nice touch, and I realise that eating burgers in London, for all the queuing and fiddliness, it does involve not driving a car.

The Dead Hippie is a double cheeseburger with minced onions, pickles (I’ll leave them in this time, Burger Lad®) and lettuce. Its defining feature seems to be the hippie sauce and the fact the patties are fried in mustard.

Coming in from the daylight it is insanely dark in here. Eventually my eyes adjust but my poor ears will have to put up with the very loud music.

I can’t tell what style it is – probably something that is currently cool/hip/trendy just as shell suits and Bros once were.

I don’t like it. It’s annoying. And I also must apologise in advance for the poor quality of the photographs than will almost certainly, occur in this twilight zone.

Anyway, when I place my burger order I ask the waitress about the origins of the name. Apparently it stems from the festivals that the owner used to attend when he ran the business from a van.

Another of the notices on the door says “No Meat, No Liquor”. I feel that is fine as I’m not American and I don’t drink liquor. I am, however, thoroughly enjoying my alcohol.

A reasonable wait and my Dead Hippie arrives. I’ve ordered a bowl of southern slaw instead of fries today.

The burger itself is quite small. Tidy. A welcoming shine on top.

I take a bite and the meat has a very distinctive, almost sweet flavour. It demands an instant second bite and I’m happy to oblige.

It’s sloppy, which I love, and if it weren’t for the fact that I’m writing this in between bites, I’d have finished it by now.

The pickles are very noticeable. The lettuce not so much.

The meat has been well prepared, with that crusty knobbly outside rim that so few achieve. I don’t think that burgers should necessarily be perfectly round.

My side dish, the slaw (I’m sure we used to call it coleslaw in the olden days. Perhaps that’s too many syllables for the iGeneration) is good. Nothing outstanding, but good.

The Dead Hippie, which by this point has become a glorious gloopy soggy mess, is fantastic.

The size means it isn’t going to ruin your waistline unless you have it often (which is entirely possible with something this good).

There are an awful lot of other great sounding burgers and other meat dishes on the menu here, so despite the darkness and loud music, for a temple of food, in my little opinion, it commands a return visit for further treats.