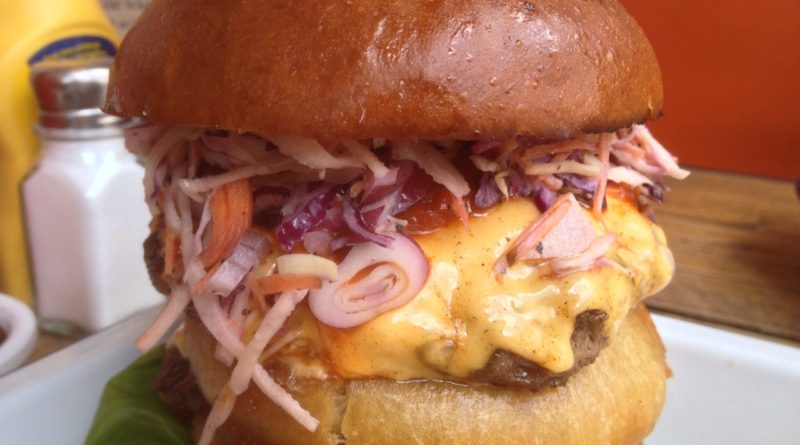 We make food we like to eat and we make restaurants we like to hang out in. That’s as honest as it gets. So what makes Meatcure? You do. We just provide the background. Original food and drink with great people and a killer soundtrack.

Meatcure has been on our radar for quite some time now.

I can’t even remember how I first heard the name but it was because of their restaurant in Market Harborough. Many, many years ago I lived in that area and worked in the town there so I suppose that’s why the name stuck in my mind.

Meatcure have another location in Leicester and there’s one opening in Bedford in June 2016 but it was the Leamington Spa restaurant we’d be visiting today.

Our table was originally booked for 2pm but we arrived really early. As in two hours early! But having spoken to the guys on duty they were more than accommodating to fit us in! More on the staff later…

Inside you’ve got that fairly common industrial ambience with bare exposed brickwork giving it that warehouse feel. The difference here is that this is housed within a beautiful and tastefully restored regency building.

We’ve obviously come for burgers at lunch but this is the ideal spot for a slow and lazy brunch. And you can do just that.

Meatcure have a simplified, but decent weekend brunch menu (available 10 to 2pm) alongside some brunch cocktails. In the week, they have a cracking lunchtime menu where you can grab a burger, side and drink for under a tenner which is outstanding value.

The burger menu isn’t extensive, which is good and there’s a decent selection.

They also do a steak, ribs, wings, chilli fries, salads, shakes, sundaes and pie – so there is something for everyone. And we were persuaded to kick-off our lunch with an exquisite salad which is a special at the moment – a Beer pulled chicken summer salad with poppy seed and red wine dressing.

This was great and I would not be lying if I said I would happily have this every day for lunch. Light, tasty, refreshing and a true taste of summer. I’m hoping Miss Milkshake will add some comments below about how much she enjoyed this…

Now, if you’re reeling from the revelation I enjoyed a salad prepare to face the might that is the Towering Inferno.

This really is an intimidating stack of food… with two 7oz patties and two onion rings this has an undeniable wow factor.

But air with caution, this burger not only imposes but requires the utmost respect. Underestimate this burger and suffer my fate you will…

Everything is held together with a steak knife and as we were taking the photos it was already starting to topple.

Structurally it’s a mess – it’s certainly not a “first dater” as it gets all over your hands, your face, the plate. I cut it in half so I could get a cross-section of the various layers and as you can see it’s pretty awe-inspiring.

The patty (or patties even) are cooked just marginally over medium, but still retain a slight pink inside. They’ve got a meaty, beefy taste and texture with a slightly charred, caramelised surface. No complaints here!

The meat is good and having talked about it with what I believe was the Head Chef, they use a good blend of rib, chuck and blade (80/20 to fat) with additional bone marrow thrown into the mix.

What you could tell just from talking to this gentleman was that he/they are so passionate and proud about their food and it really does show. The patties also took a total of eight months to perfect the recipe – here the standards are high!

They also don’t do frozen ingredients – so everything you’ll sample is cooked fresh on the premises (obviously except the ice-cream products) and the buns they use on the burger are really quite good and sourced from a local bakery.

I forgot to get the name but again these took ten months of development to get them right – this is how much Meatcure care about their product, instead of just rushing out anything.

In fact, they’re currently doing a crowdfunding campaign to open more locations. But one thing that was stressed to us, was that they don’t want to bring out loads and loads and dilute the individuality or quality of what is served up.

And that’s something they hope to maintain across all their restaurants. From what we encountered today, I don’t believe they’ll struggle with that philosophy.

Back to the Towering Inferno…

Apparently the Smokey and the Bandit is the most popular burger on the menu but for me I needed to try the Towering Inferno.

Not so much for the double patty element, more so, the Armageddon sauce. It’s spicy with quite a kick that creeps up on you with a pleasant, powerful punch of flavour in the face. It’s fruity, vibrant and really rather good and the definite stand-out flavour of this burger.

Personally, I’d like to have this as a one patty option instead of the “challenge” of two patties, but then I guess you would have to play around with the name.

I get the feeling you could probably ask to get it with just one patty but after attempting to eat it (nearly finished it) and putting some of the fries (very good I’ll add) away, I did feel a little “done in”. Maybe I’m losing it…

I always prefer this style of slaw – the crunchy, red cabbage variety, opposed to the sloppy, sweaty, mayo-based ones you’re likely to find in some places. It really brought a nice crunchiness to proceedings but also contributed to the overall messiness of the build!

Alongside this you’ve got the salad items (standard – and my tomato was removed), melted cheese (this coped well with its more combative elements on-board) and then two of the finest home-made onion rings I have encountered.

A delicate coating, not too greasy and with good-sized pieces of onion housed within. These and the two 7oz patties help to build the fear factor of the Towering Inferno.

What I would say, is that if you really want to have that association with the movie of the same name, is to swap out the mayo and replace it with something like Newman’s Own Ranch Dressing. Just a thought…

Overall, the Towering Inferno is a pretty tasty and respectable burger.

The patties are good and sourced from quality, local butchers. I’d not rank them in the same lofty heights as Solita or Almost Famous but they’re not far off (and those guys have set the proverbial bar very, very high!).

The Armageddon sauce is lovely. Really recommended and I was glad to try it as a dipping sauce too.

The burger is exactly what it says it is – a Towering Inferno… and when it arrives with a thud on the table your jaw joins it!! You then wonder how on earth you’re going to get your jaw around it! It’s messy but tasty and a whole lot of fun and certainly worth a visit.

The staff are truly incredible at Meatcure in Leamington and we received one of the most welcoming and pleasant bunch since we’ve been travelling around reviewing burgers.

We even got persuaded to try a Bubblegum Sundae after, which again Miss Milkshake will hopefully talk about in the comments section later.

Meatcure is the sort of place you can come in and hang out on a lazy Sunday with your squad while reminiscing about the night before (especially if you want the good times to continue).

It seems to be a good destination whether you have a family or want to hang out as a group or share an intimate bite to eat. The vibe in here is cool with a wicked and funky soundtrack to accompany an excellent array of dishes.

Meatcure are very proud of their ingredients, recipes and food and a warm welcome will await you. They brought us out pretty much anything we could have wanted today… all except the pillow. Check them out, you will not be disappointed.

As with all of our reviews when we don’t pay for anything we have to add that this did not influence our thoughts, opinions and/or scores in anyway and we’d return in an instant… after I have a much needed lie-down! 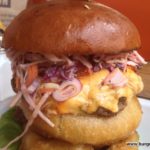