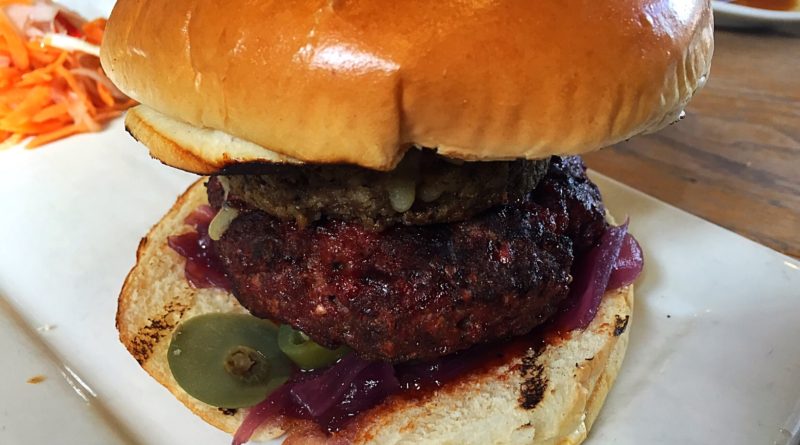 By working closely with our butcher we bring you only the finest grass fed Scotch beef from local farms. Beef patty / Jalapeno / Onion / Whiskey BBQ Sauce.

Meat House dropped onto my radar just as I was due to visit the City of Discovery, fortuitous timing indeed. On the face of it, it definitely sounds like my kind of place – meats n beers, and of course the name is well chosen.

So off to the student end of town it is. I did have a look at the menu online beforehand and it looked very inviting. What also struck me were the prices – since when did students become so well off? This area of town is full of “trendy” new openings and some long-standing pubs I’m sure have been here since the 60s.

But Meat House it is today. Entering, it certainly looked the part – the requisite amount of wood panelling, beers set out on display. It’s also quite a large place with two eating areas upstairs and what looked like more seating downstairs (I didn’t go exploring).

Initially the service was a little brusque for whatever reason but defrosted as the meal went on. A couple of irritating little things to begin with as well – the menu has clearly changed on paper but not online, meaning that what I read just the night before was out of date, and on top of that I was told it would be changing again soon. And I couldn’t cross-check due to the second issue – there was no Wi-Fi and only a GPRS mobile connection (party like it’s 1999!!!). Is a lack of Wi-Fi still acceptable anywhere – I’d argue it is not.

I started with haggis and black pudding bon bons (cos Scots eat haggis all the time, don’t ya know) which were basically breaded fried nuggets of the respective contents. I didn’t like the black pudding ones but the haggis ones, altogether softer and warmer, were reasonable.

But before we inspect the burger, it’s worth pointing out that this place has a Josper – a very hot oven of sorts that goes some way to replicating (in skilful hands) barbeque cooking, but indoors. That all sounded really very promising, and I’d chosen to add smoked cheddar and some haggis (for the aforementioned reason) to my Jim Beam Black, which also included onions, jalapenos and a fantastic-sounding whiskey bbq sauce. There was also a choice of chips, fries or other sides at extra cost, but I left those out.

So far so good. Then it arrived.

Visually, the build on this burger was heel, onions, jalapenos, sauce, beef, haggis, cheese, crown. I’m sure you can tell, even before I start describing further, that there are a couple of problems with that. Firstly, the cheese is on top of the haggis (which has a far smaller diameter than the beef), leaving the beef un-cheesed (and trust me, this beef needs cheese – will get to that in a minute.

Secondly, the sauce is under both meats when it ought to be on top. No cheese and no sauce on top of this beef makes it very dry.

I mentioned the diameter discrepancy between the haggis and the beef, and this may be forgivable as the haggis was my own choice from a list of add-ons and isn’t part of the standard burger. What is less forgivable is the instantly noticeable disparity between the patty and the bun. Massively so.

The patty IS quite big, but it is rather thick, making it less wide. The bun has not been well chosen for this size of patty and the whole thing looks rather silly. In addition to being the wrong size, the bun definitely didn’t have any sort of premium feel to it, and the heel was already sodden with the sauce when it arrived, meaning it was a cutlery job from the start.

So, unfortunately I was disappointed before I even started eating it, and even more unfortunately the eating didn’t improve my opinion.

As I was eating with cutlery, I had to open it out into two halves. The cheese had welded the haggis to the crown, so that was one half, while the other half was the beef, onions, jalapenos and sauce on that sodden heel.

I started with the former, cutting into the haggis and getting a bit of bread and some of the elusive cheese. The haggis had obviously been formed into a round of a smaller diameter than the beef patty and the mouthful wasn’t awful, just rather uninspiring. Haggis isn’t something I have very often, but I have had better examples that weren’t quite so dry. In fact “dry” was sadly the theme here and it got worse when I went over to the beef side.

I could already see from its dry top, that this beef patty had been overcooked. I understand that it needs to be well-done, but this one was dark and crispy on the outside, so much so that more force than should be necessary was required to cut down through it. Cutting it open, I found an extremely tightly packed form – a slab of beef for want of a better term.

I crunched down through that crispy shell into the interior and it was tough going I have to say. The beef had little flavour left, was very thick and a bit of a chore to finish. In the right hands a Josper can do great things, but it won’t much improve a poor blend of beef and it most definitely will burn stuff if you leave it in too long.

And that blend of beef might very well have been prepared by hand on site, but because of all these problems it could just as well be bought in frozen. I didn’t actually ask about the sourcing, something I regret – I should have.

The best part of this burger was in the basement. Jalapenos are nearly always a great addition and they added a much needed ounce of jazz to this affair. The whiskey bbq sauce mixed with the onions gave a considerable sweet hit to any bite that included and the combination of the heat and the sweet tried really hard to take my mind off the beef.

In essence, this was a prime example of a good idea with poor execution? Could this be improved – of course.

At the very top of the list is the beef. If they don’t prepare the patties fresh, then they should. It should be a coarser grind, possibly with a bit more fat percentage, and it definitely needs to be cooked less. If that’s not possible with the Josper, then use a flat-top. Some seasoning wouldn’t go amiss either – basically a fresher, better blend with more juice and more flavour – the same presumably applies to all the burgers that use this patty.

Cheese should be added to the beef, not to another topping (in this case haggis) and a better quality and size of bun used.

Salvageable, yes, with effort. Apart from the starter, I haven’t tried the steaks and other menu items here so I can’t comment, but on the basis of today’s burger I wouldn’t rush back unless I knew at the very least the beef patty had been given attention. This was a heavy going dry burger that ultimately, I couldn’t finish.

The venue itself is impressive enough in a good location, and they are clearly very proud of their choice of oven. If this quality and pride could make it into the cooking, this would quite likely be a re-visit in the making. 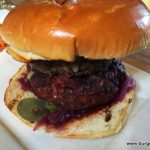