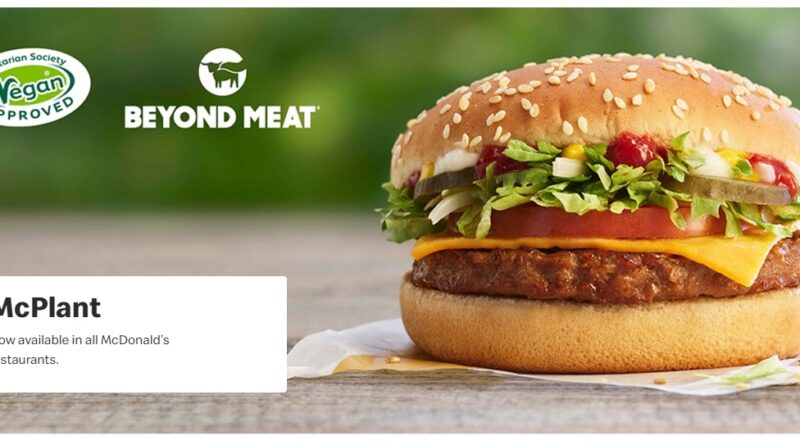 The McPlant is now available nationwide in the UK and is a vegan burger made with a plant-based patty co-developed with Beyond Meat.

I could go into the history of the McPlant – that it was originally introduced in various overseas markets such as Austria, Denmark, Sweden and The Netherlands and that it has also had trials in a select number of restaurants in the US.

I could add that the McPlant burger itself has already been in the UK and was originally trialled in ten restaurants in Coventry from 29/09/21 and then a further 250+ from 13/10/21.

Again… do we need to go into that?

Let’s not bog ourselves down with detail and have some fun with this review instead. You know… like the original BURGER LAD®. 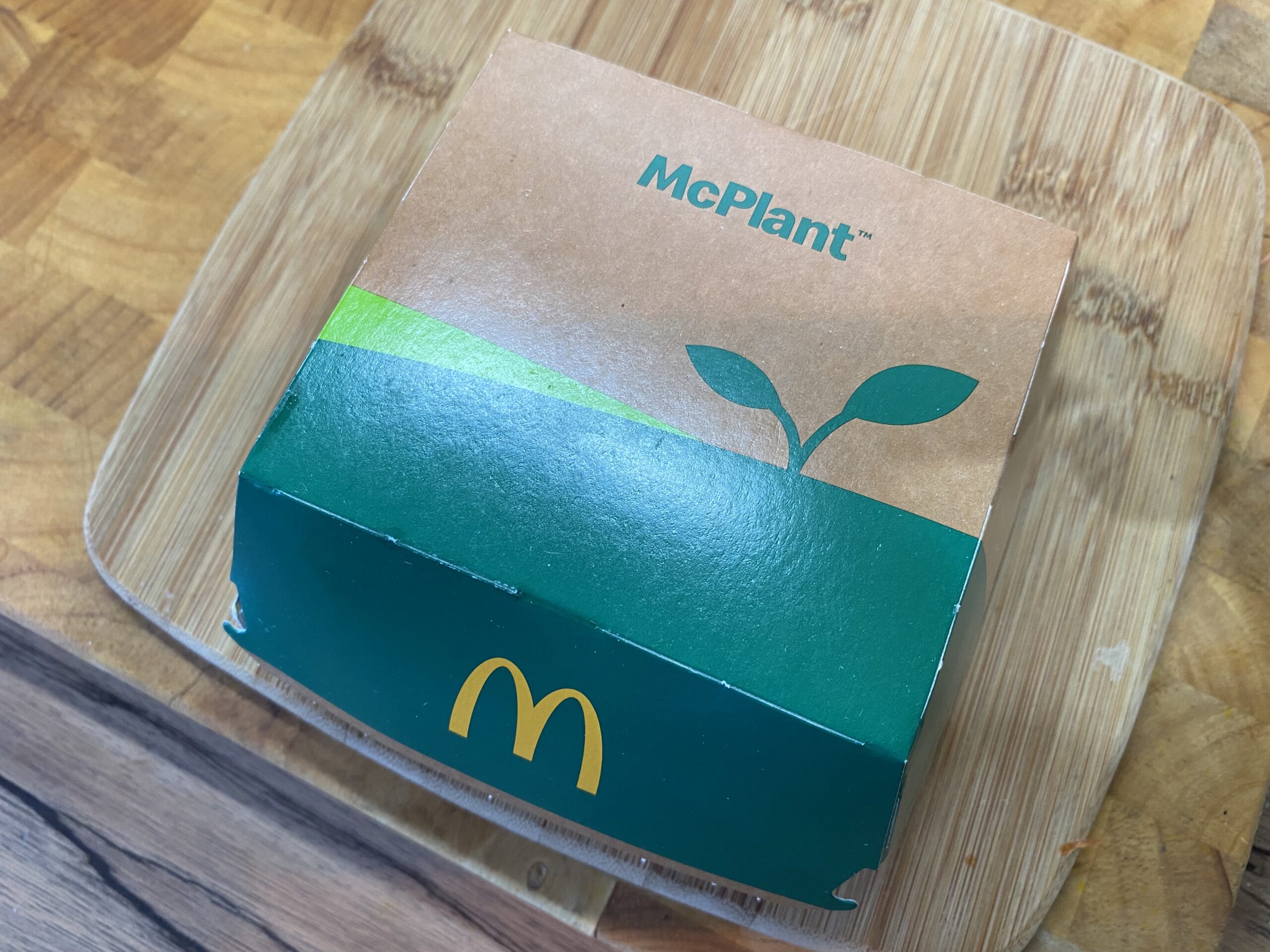 There’s a special person that has been anxiously waiting for the McPlant because they have been really, really keen to sample the “true taste of McDonald’s” in a vegan/veggie format.

Captain QP take a bow – your time is now!!

The McPlant is not quite a carbon copy of the Quarter Pounder Cheese I’m afraid Captain.

But what I can tell you, is that if you customise via the app or touchscreen, you can remove the Sandwich Sauce, Shredded Lettuce and Tomato and you’ll be damn close to that QP.

Note: there are two slices of cheese on a regular QP but what can you do…!?

Oh wait… I’ve got a cheese slice stuck to me ala Randy – that will do it. 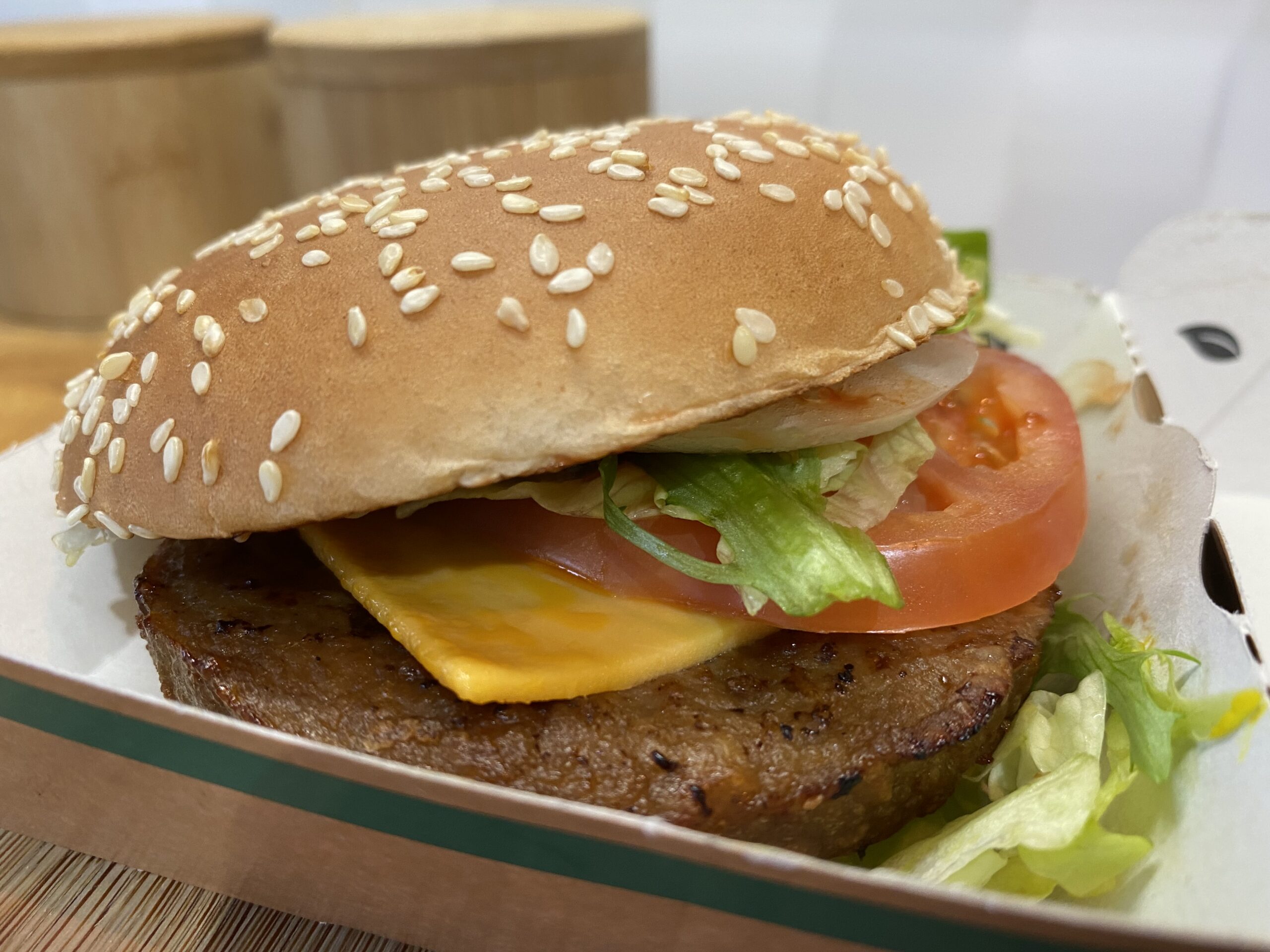 You also cannot add anything to the McPlant – but I wanted to pimp mine with bacon dammit.

January is a great time to make this nationwide as “some people” will participate in Veganuary.

Plus, it coincides with Burger King launching their Vegan Nuggets and KFC bringing back their Vegan Burger on a permanent basis. WHAT A TIME TO BE ALIVE!?

Moving on to the review…

I had forgotten what a hell-hole Kingsditch McDonald’s is and it was pure chaos at approximately 1:45pm – course all the Click & Serve bays were full so had to go via the dreaded Drive-Thru.

We also got told off for parking in a disabled bay while waiting for our food to arrive. Yes I know it was wrong of me to park there but there was nowhere else to go… and it seems that if you are a McDelivery driver you are allowed to park in them. 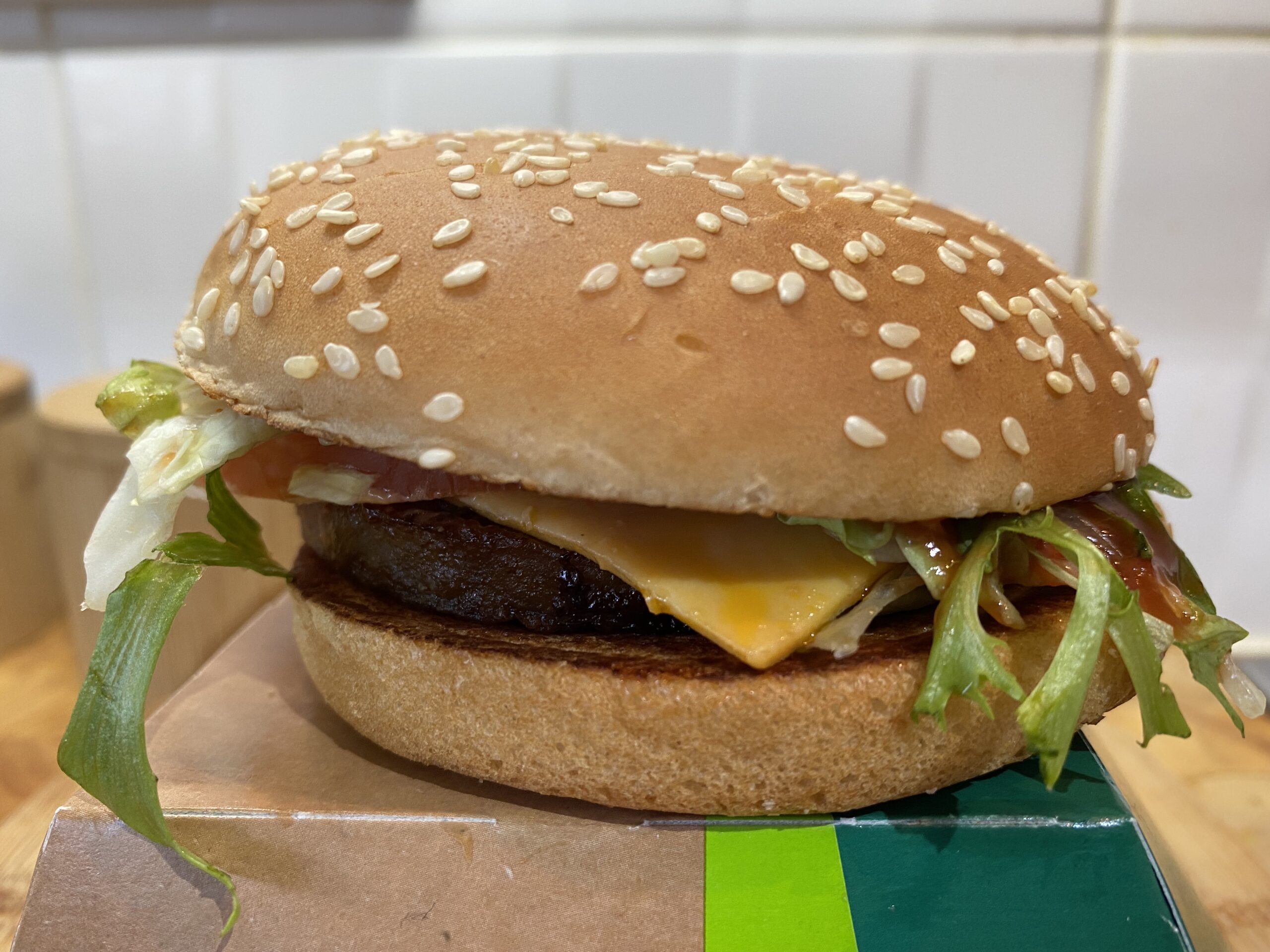 My hope of a decent looking build was severely dented when I looked in our brown bag to see the McPlant clamshell flipped on its side. Come on… just put it flat in the bottom.

The burger itself is impressive and I would want to try another again, next time trying to replicate a Quarter Pounder with Cheese as described above.

It looks and smells like a McDonald’s burger. Plain and simple.

IMO, the taste of the patty is as close as you will get to the regular beef patties – it’s not identical and nor was I expecting it to be. I didn’t even get that trademark McDonald’s cough after eating it either. Almost disappointed.

The texture is obviously different – a good quality as expected with it being Beyond Meat… it’s slightly soft. I wouldn’t want to say mushy as that would do it a disservice. 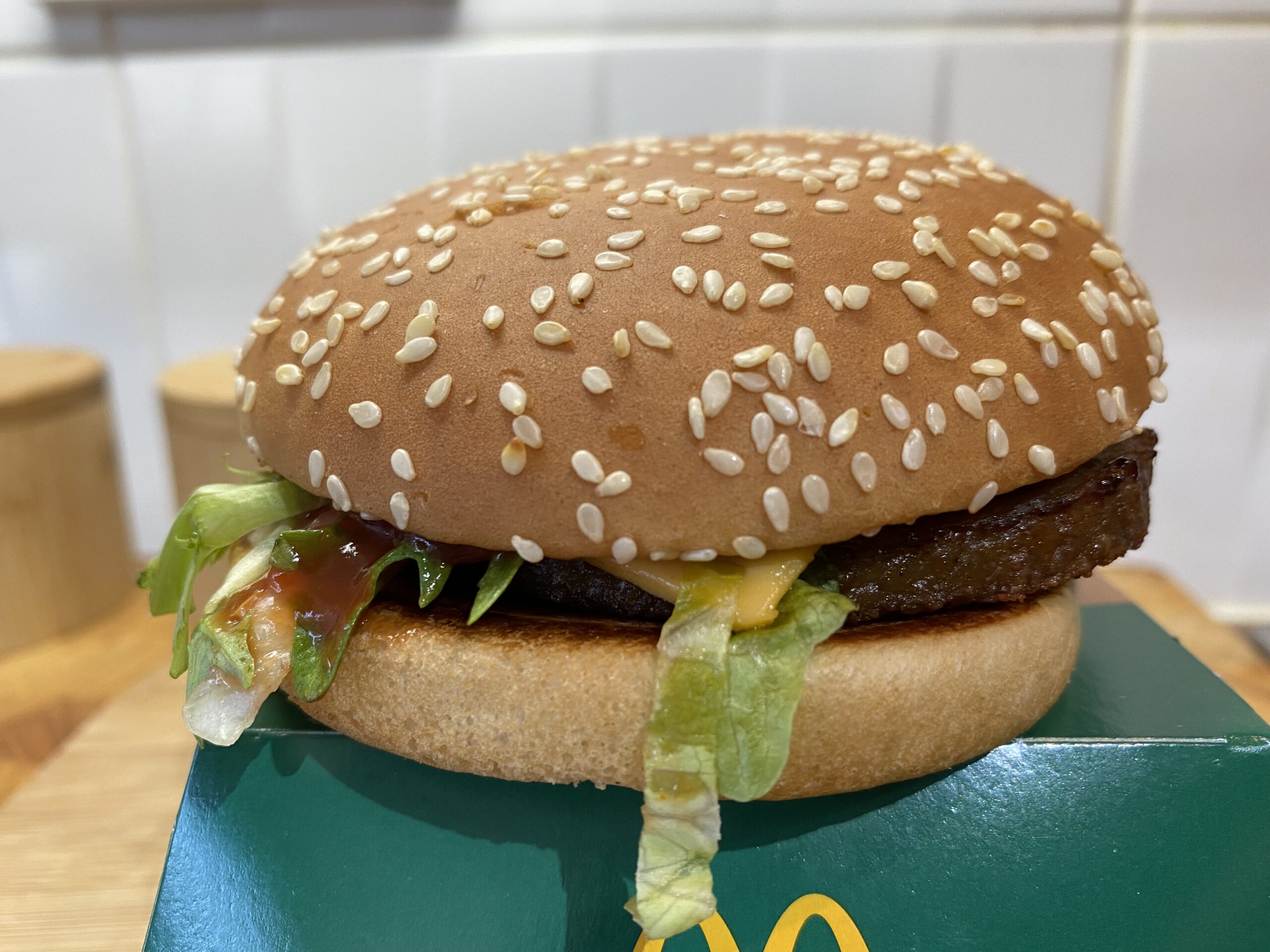 The crunchy, tangy onions and pickles are certainly welcome and definitely gives it that McDonald’s vibe. The prevalent flavour seemed to be the fresh tomato but that could be due to my ongoing aversion to it… I would remove this next time nay bother.

If you a curious as to what the McPlant is like, I would recommend trying it if only once. It reminded me of the Quarter Pounder Deluxe actually.

I did have some issues with my build though… 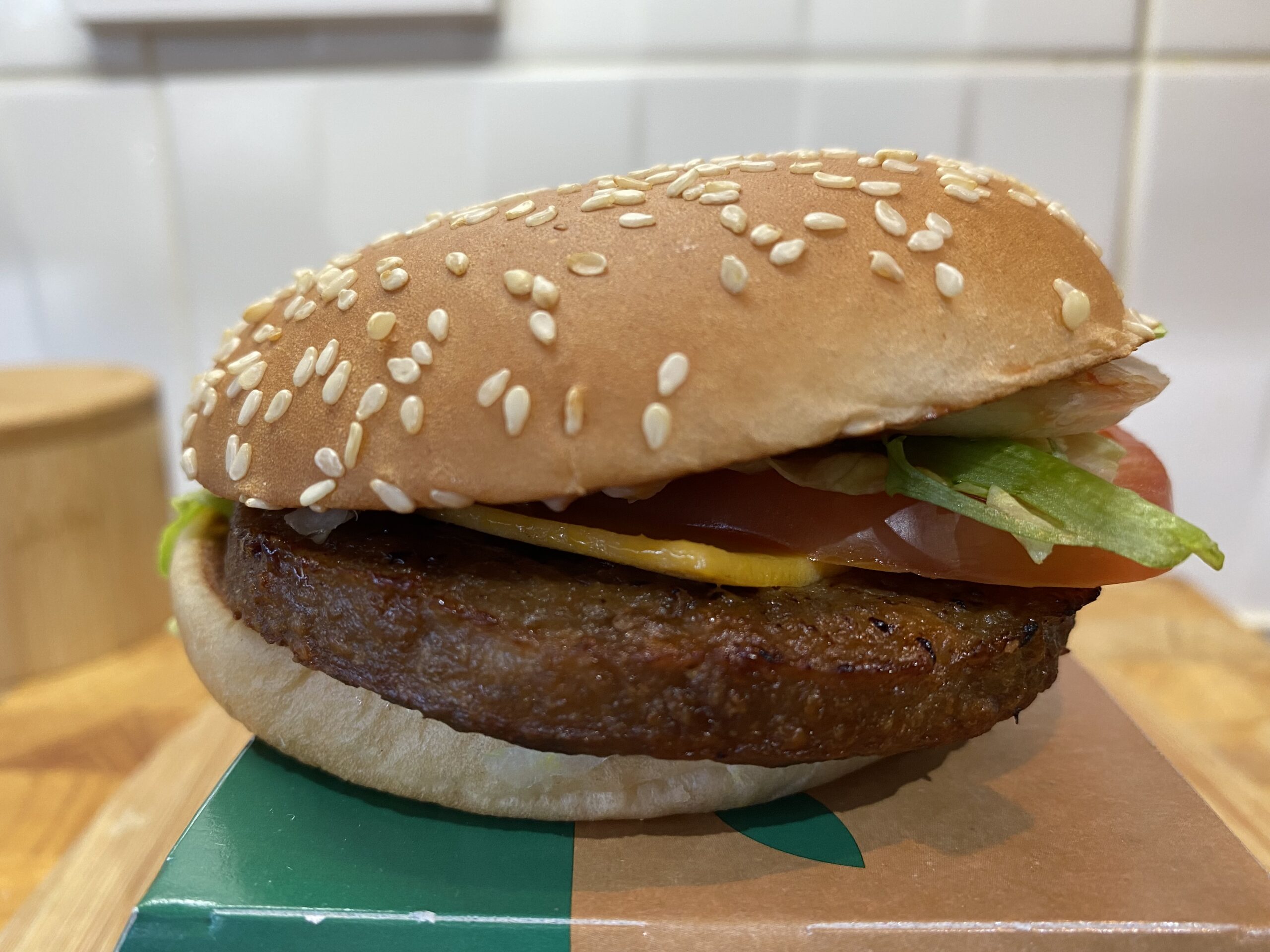 Upon further inspection there was very little Sandwich Sauce – not a major crime as it’s not the sort of sauce I go for… but the amount on my McPlant was minuscule. Same can be said of the Mustard – but we find that often goes missing in action on the QP too. 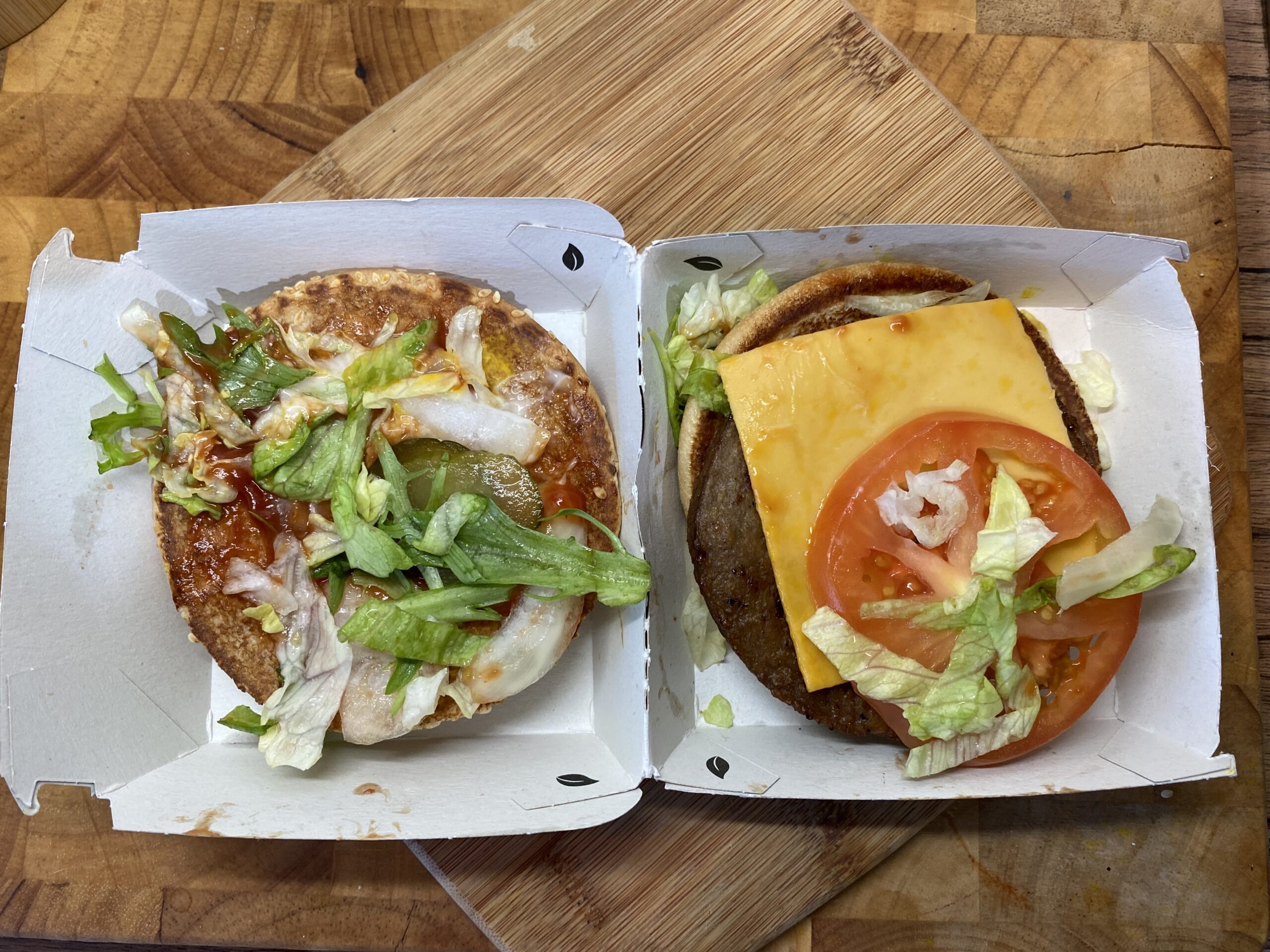 Of course, I washed this down with a good old Double Cheeseburger (didn’t fancy the Triple today) minus Ketchup. Obvs.

Driving back to BLHQ as quickly as we could, I was wondering how it would compare to Burger King’s and KFC’s vegan burger options.

After now sampling all three, I would place the Rebel Whopper (now named Plant-Based Whopper) in first place, the McPlant in second and the KFC Vegan Burger third.

There was just something about the BK offering which made it nearly indistinguishable from the regular beef Whopper. Maybe it’s that flame-grilled flavour?

Overall, the McDonald’s McPlant is a thumbs-up from me and I can imagine countless veggie/vegan McDonald’s fans will be rejoicing now this is available nationwide. Give it a go and see what you think. 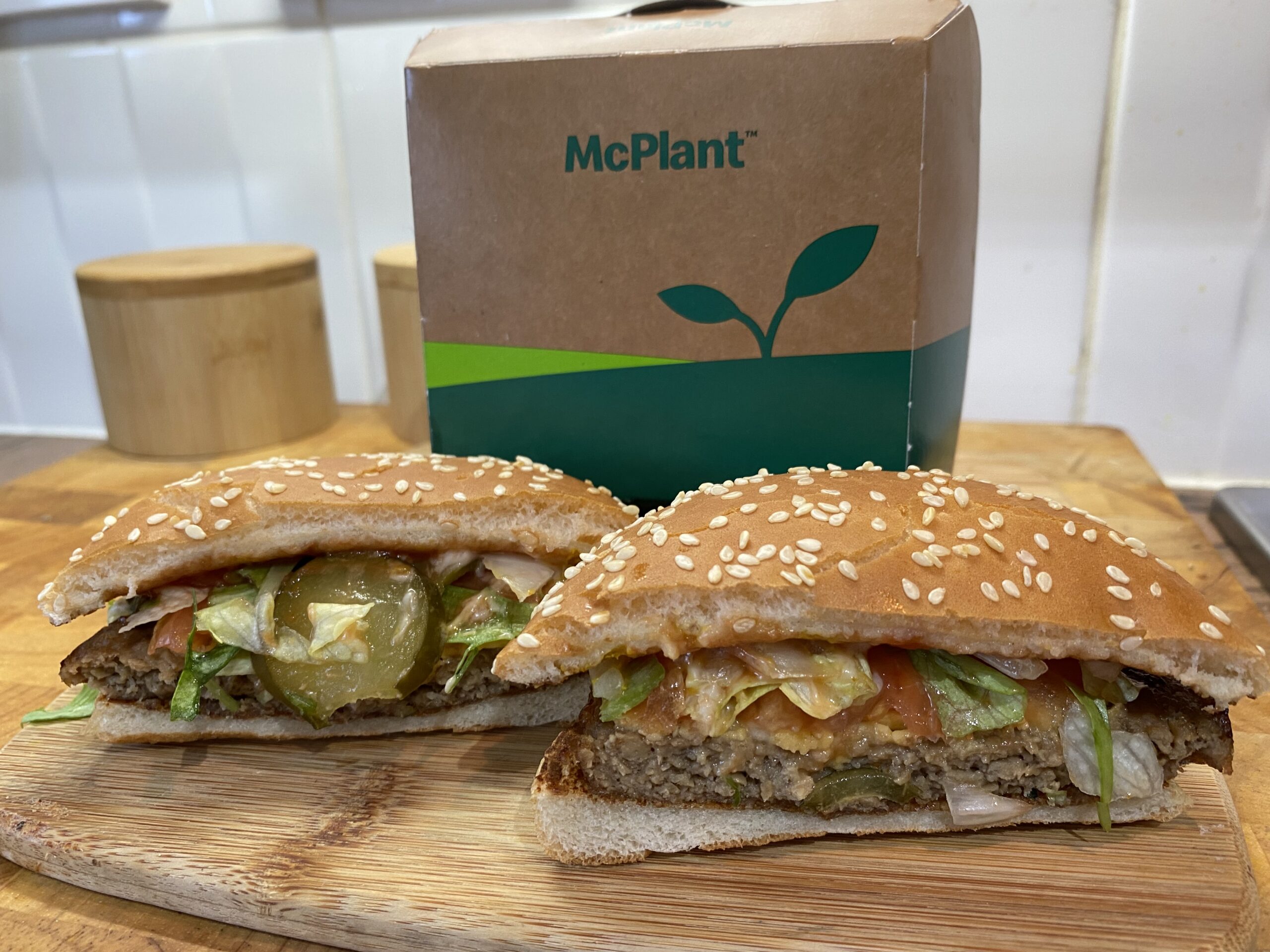 I apologise that 2021 was a bit quiet on the website and that the McDonald’s Festive Menu didn’t receive a review.

I’ve been working on a project which has taken a lot of my time and energy but should result in some major rewards in the future. 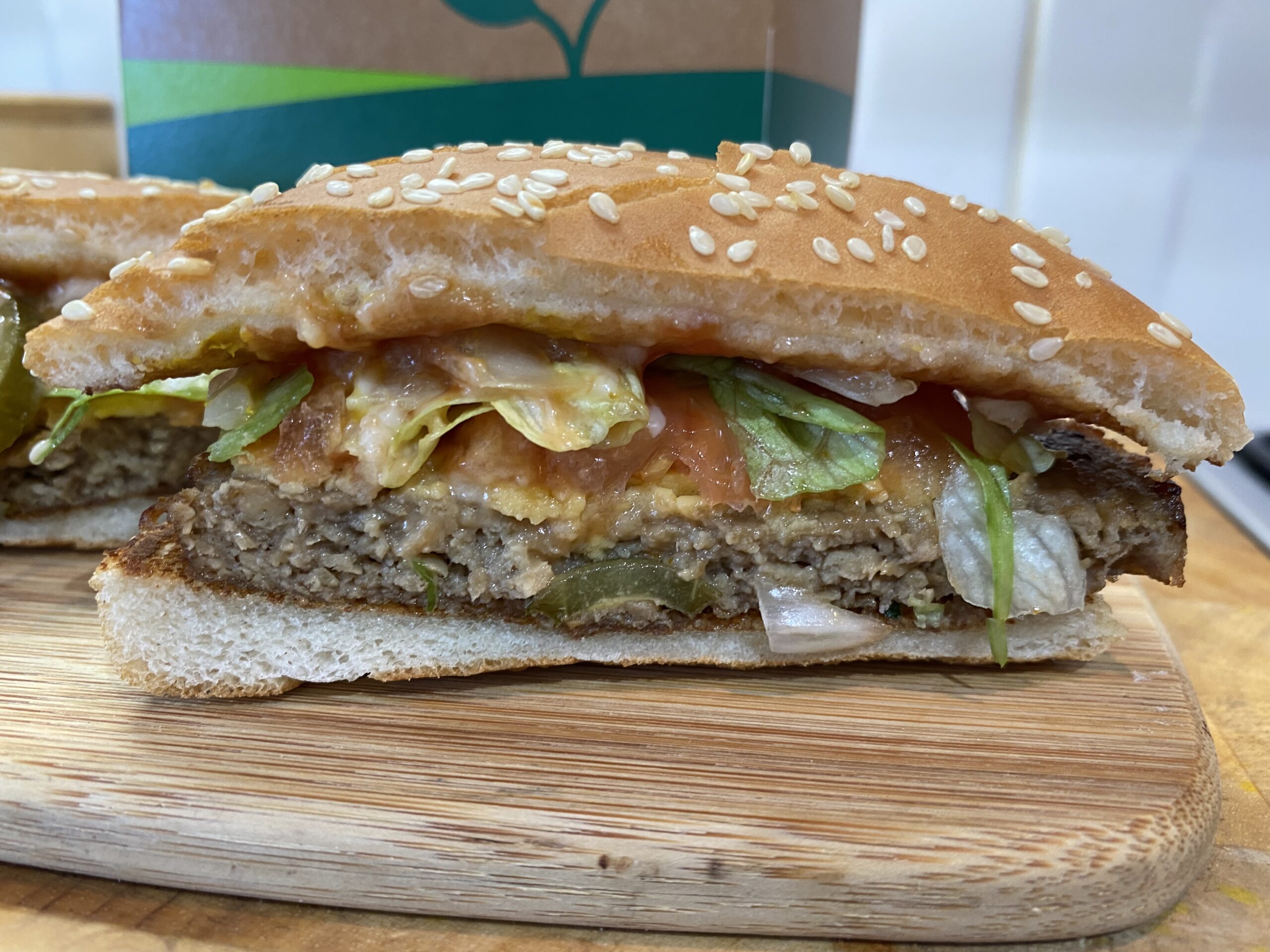 You can guarantee I will be back to review the Chicken Big Mac when it is makes its debut in the UK in February – and no I am not expecting it to be made with Selects… but you never know!

We are also hoping to resume your favourite fast food Podcast very soon.

Thanks again as ever for all your kind messages and support. 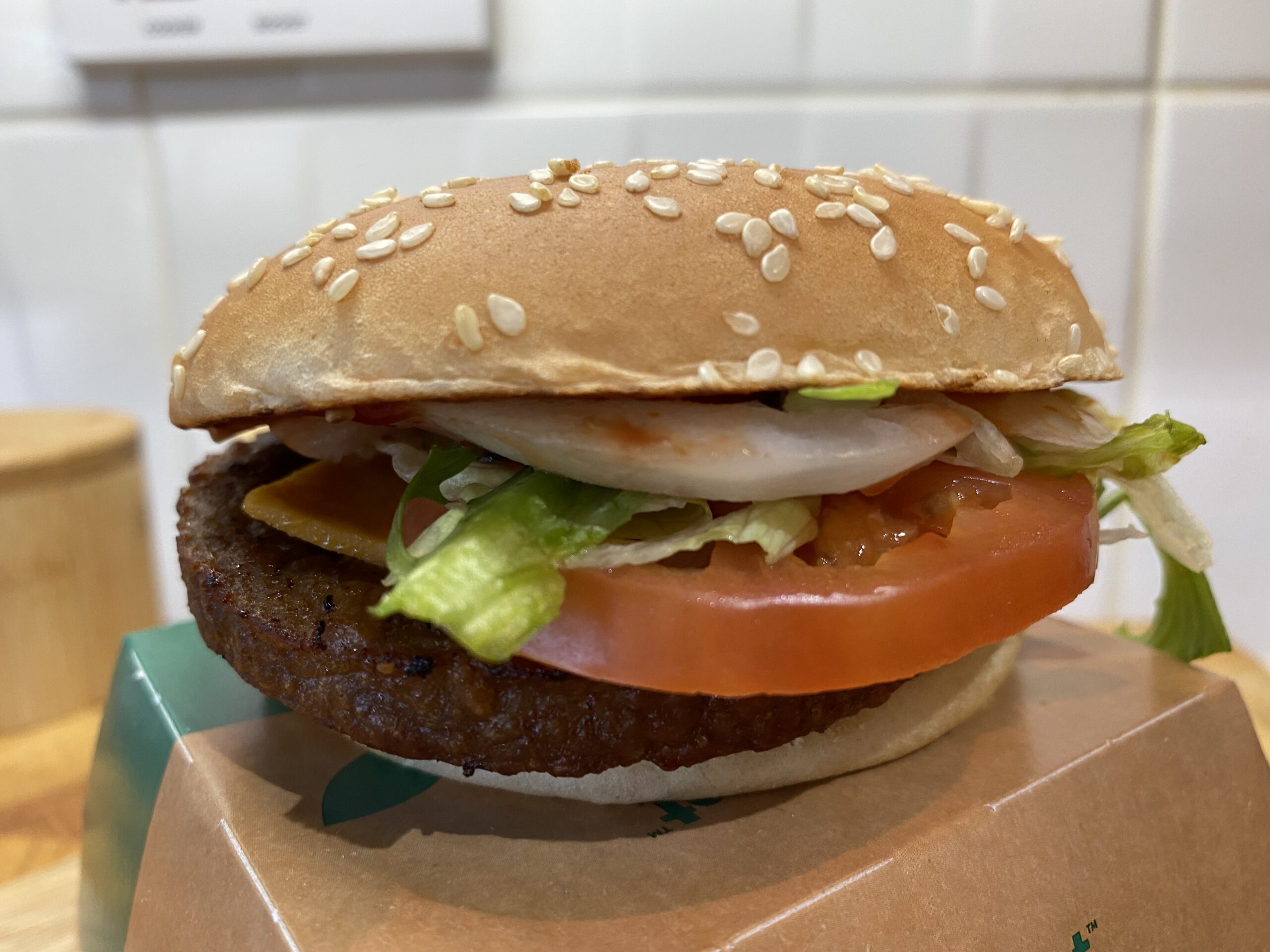 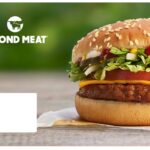 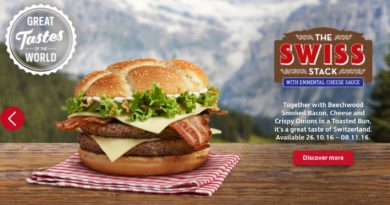 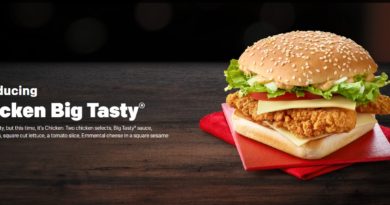 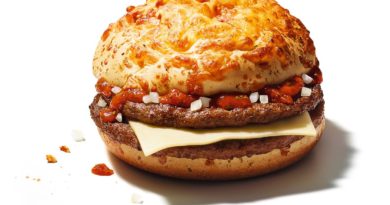