Mature Cheddar cheese on a 100% British and Irish beef patty, topped with streaky bacon and grilled onions. Finished with Batavia lettuce, cool mayonnaise and a tomato chutney all in a sesame seed bun.

The other evening I was sat at Burger Lad HQ not really paying much attention to anything when I heard “the new Tastes of Summer at McDonald’s” mocking me from the TV.

So not only am I on the McWanted list, I no longer get my tip offs of promotional burgers coming soon. It was a sad, lonely moment but I’m not one to bear a grudge so I decided I would check out this new range.

I was even tweeted Thursday by NateDawg27 informing me he had tried one that day. So it was Friday Burger Lad® tried the Tastes of Summer Cheddar Deluxe. I wonder when those “other” burgers will arrive in the UK…

Now I didn’t attempt to take a horse or a mobility scooter through the drive-thru but couldn’t face going inside after the BK ordeal from earlier in the week.

This was to also be a pioneer review because gone was the trusty notepad and (after the dismal photos) camera, instead I had my iPad which thanks to advertising was paid for by this website. And if you believe that…

How the mighty have fallen. We used to proudly film in the restaurant without a care in the world but here I was taking covert photos in my car while hoping not to be seen. I checked the parking enforcement signs looking for “no burger photography allowed” and was partially relieved of its absence.

Where will I be reviewing burgers next…? The park maybe…

Enough… let us take a look at this latest beef offering from McDonald’s.

So full of partial optimism I opened the box to find a nice wad of melted cheese over the inner of the carton. My face was like Luke Skywalker in Empire Strikes Back when Vader reveals his heritage.

Well it is possible. Undeterred I took a few more photos while shiftily looking around and then prepared to taste the summer.

Well the first taste of the Cheddar Deluxe is the tangy tomato chutney. In fact, it was almost fruity tasting but had a freshness about it that I really liked. You really don’t notice the cool mayonnaise on board this burger but it gave a slight contrast to the tomato tang.

The bacon was good and had a very distinct, smoky flavour but you had to break an individual piece off to really get the full force of it.

The patty was a bit greasy actually but again I broke a separate bit of it off and it did taste of beef. Sometimes you find the burgers here don’t really have a taste.

The Cheddar really didn’t look anything like the promotional pictures. It was thick, melted and I was pleasantly surprised how strong the flavour was. Another winner on this summer bun was the fried onions which were cut quite thickly and retained their sharp taste.

I very nearly drove back through to try the Mediterranean Chicken but thought of the calories and decided against it. Maybe next week…

So we’ve had the tale of two High Street burgers this week.

At Burger King I was waiting 20 minutes in total to get served and then get my burger and it had been put together quite well.

At McDonald’s I was instantly given a burger which had been sat around waiting for the lunch crowd with the dreaded “slide”. But which was best?

I think I would have to say the Cheddar Deluxe.

Overall, it was quite good really and I will even let the “slide” pass on this occasion. It’s nothing new or exciting but for £3.79 it’s not bad value and worth it for the Cheddar, onion and chutney combination. Head to your local McD’s at 10:30am and get one of these made up fresh.

We’ll be back again soon for further 21st century burger adventures. In the meantime, let us take one last look at that McDonald’s Tastes of Summer Cheddar Deluxe. That tomato chutney is surprisingly refreshing. 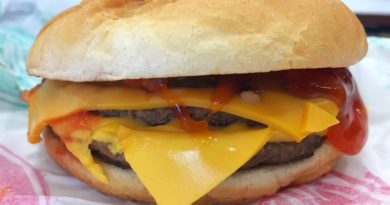 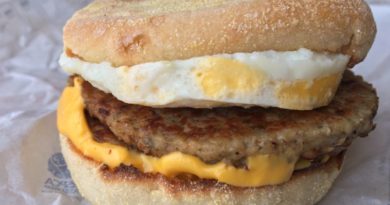 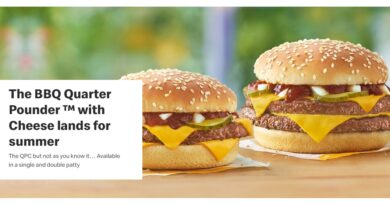