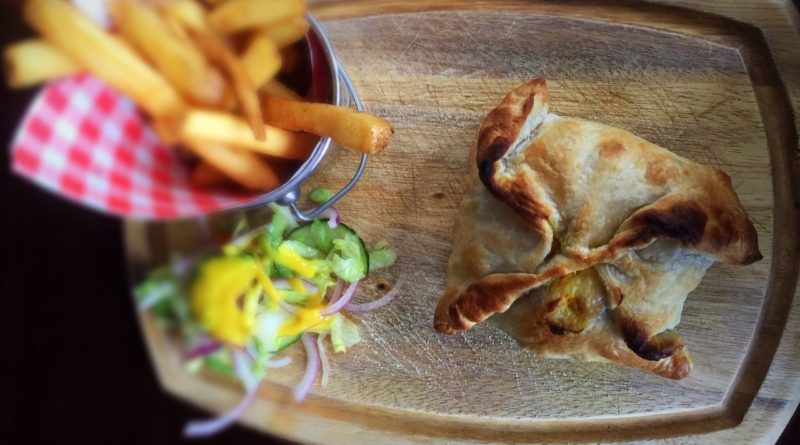 I would hardly say Wigan is experiencing anything so cosmopolitan as a culinary revolution.

However, along with the Courtyard, Marty’s Kitchen is offering a slice of Americana comfort eating in the heart of Greater Manchester’s most distant outpost.

They do apparently have a Facebook presence (which I don’t) but have not been keeping their Twitter feed up to date. After speaking to the boss, she indicated they might revisit that, as it is of course a key marketing tool these days for any restaurant.

The menu is all very appealing here, ribs and burgers, that sort of thing. And it has a very central location in what is a small conurbation. So that was reflected in the buzz of the place.

I was in on a Saturday early evening, and while it was relatively quiet to begin with, it really picked up as I was leaving (some might say “because” I was leaving!). It was mostly a middle-aged crowd and I did get the impression that orders were skewed in favour of drinks.

But back to that menu, and specifically the burgers.

There about five burgers, plus the obligatory veggie option, and it is clear from the descriptions that Marty’s isn’t short of innovation.

My first reaction was a sigh, though, when I noticed that the standard bacon cheeseburger included egg – something which, in my view, had no place on a burger.

However, that notwithstanding, choosing just one was actually quite tricky. I eventually decided on the Meaty Pie Burger, and although it does clearly say that it’s in puff pastry, for whatever reason it didn’t immediately strike me that it was, to all intents and purposes, a cheeseburger pasty.

When I put my order in, the waiter (his second day apparently, although it really seemed like he’d been here forever) explained I could have the burger medium, medium-well or well done. Eureka!

Proper medium-cooked burgers are becoming such a rarity these days, I was delighted to have discovered a restaurant that could actually be bothered paying for and administrating the FSA guidelines.

Although it may be because they are fairly new, they haven’t yet had the inspection and rating, but either way I was happy because for the first time in a while, I was going to get a great juicy medium beef patty!

I said that it hadn’t clicked that this was a cheeseburger pasty – it certainly clicked when it arrived at my table (although that took rather longer it should have, given the less than 50% covers at the time).

When I saw it, my first reaction was “wow, what’s this – oh yeah, that’s what I ordered”.

Of course, I couldn’t see anything except the puff pastry and although that in itself makes it less interesting to look at, I was genuinely impressed with the innovation here.

The smell was very enticing, with the mustard cutting through the beefy tones.

I suspected that would make a fair impact on the taste too. I took a couple of bites – it was a pretty unique experience with the only other fully-enclosed burger I can remember was Solita’s Dirty Secret.

As burger lovers, we are quite used to seeing most of what we are eating before we eat it, so it was quite interesting to go in blind.

Those first few bites told me a number of key things.

Firstly, that the puff pastry wasn’t overwhelming. It did the job that a bun normally does, namely holding things together, but was of course thinner (I wouldn’t go as far as saying it felt in any way lighter – this wasn’t a small meal!).

Secondly, that there was sweetcorn in there, and this isn’t mentioned in the description. Thirdly, that the mustard taste did indeed come through very strongly, while the bacon did not.

And lastly, that the beef patty was cooked medium, and seeing the soft pink beefy centre was like greeting an old friend. This was a very enjoyable meal.

The beef first of all, well I forgot to ask about the sourcing and it isn’t mentioned in the menu, but I liked it. That’s partly because it was cooked the way I like, but also because it seemed to be a tasty blend, lightly seasoned and ground fairly coarsely – all the top boxes are ticked.

The bacon, as I mentioned, didn’t really cut through – the thin, British style slice was certainly there, but the beef was stronger, and with the fairly noticeable mustard, there wasn’t much scope for anything else.

In fact, as I tucked in more, I realised the familiarity I was experiencing was due to the cheeseburger spring rolls again at Solita.

Whilst the puff pastry was less crispy, the overall taste and experience was not a million miles from those legendary bites of heaven.

I certainly wouldn’t want the mustard to be any stronger.

I do like it in certain things, but I’m not its biggest fan, so I prefer it to be more muted and countermanded by other flavours.

If there’s any criticism of this otherwise highly enjoyable burger, that would be it (although of course I appreciate it’s down to personal taste).

I say enjoyable, because in the back of my mind was the thought that I’d like to try this construct in a more traditional bun.

As much as I really liked the innovative pasty construction, it does make it easier to compare with others. But that said, this really was unique.

I’ve had more than my fair share of burgers as you know, and it’s wonderfully rare to be presented with something I’ve never had before.

So this is definitely one to watch.

As I said at the start, Wigan is arguably the worst of Greater Manchester’s ten boroughs for eating, so it is delightful to see places like this raise the bar and hopefully others will follow.

I will definitely be back to Marty’s Kitchen – I really liked the atmosphere, staff were all completely on the ball, and there are a few non-burger dishes I really want to try. 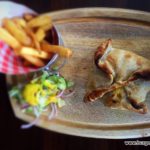