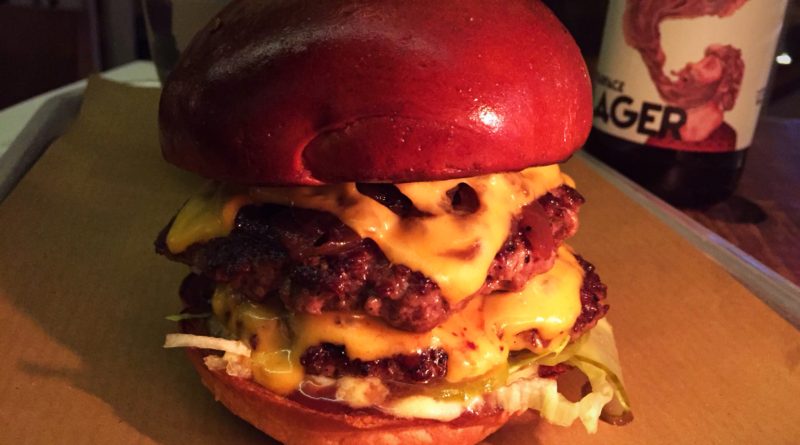 I forgot to ask by whom, but this is now 2016 and it hasn’t yet had the BurgerLad.com scrutiny, the gold standard of burger reviews (although I was very impressed by the venison burger at its sister restaurant, Wild Game Co.).

Anyway, backtracking a bit to that impressive venison offering. It’s the same three Scotsmen (minus the stag – don’t ask!) who have set up a new operation a little way from the original in Fitzrovia.

Inside, it is very similar – brick, leather, wood, great lighting with a selection of the Mac and Wild cocktails that are now apparently available at Sainsbury’s and Waitrose (no, I didn’t know either). After a brief chat with busy Adam, one of the three owners, my Venimoo arrived.

The combination of the lighting, the dark glazed brioche and the decor ensured this looked like a really rich meal (belying its low-ish price tag). But I knew even with looks aside, it was a rich meal. Anything with bearnaise, beef and venison is always going to be rich.

The burger arrived on a metal tray with a piece of brown paper, which I thought was rather undervaluing the otherwise higher class of the place as a whole. The chips, on the other hand, absolutely looked the part with loads of skin on, and served in a thistle-motif bowl. I was a bit annoyed that they were added at £3 without being ordered, though.

The tray was a minor issue, because the burger looked fantastic. It really did. I know I have to wait a few moments while I get my photos done anyway, but I really did pause to let my eyes take this in before attacking it with my mouth.

It’s essentially an enriched double cheeseburger. Two quite substantial patties, one beef and one venison. Obviously it’s the venison that elevates this from anything standard, but I must say the bearnaise plays a significant part too. It’s an underused burger topping in my opinion.

It’s not overdone, in terms of toppings either. Where it is perhaps overdone is in the cooking. It is presented well-done due to council regulations, Adam said. It’s a shame because medium-rare this would be completely off the hook.

As it is, it’s cooked well done, both meats, but it does go down a real treat.

It is just the right side of messy, with the cheese, bearnaise and caramelised onions ensuring, in case you didn’t already know, that it has a very, very rich feel to it. The gooey, stringy onions, soaked in sauce, somehow managed to give it a dirty burger and classy feel at the same time. It has clearly been well thought out.

And this is a business that takes its sourcing incredibly seriously. So much so, that the entire reverse of the menu is devoted to a list of the places where each individual meat comes from. Where else gives you that without asking?

The venison comes from Andy’s father, while the haggis, beef, cod etc are all listed. They even tell you where the rapeseed oil comes from!

It is a tremendously good burger and the fact that I’ve had a venison offering twice from this lot is testament to the fact that you will struggle to find a better venison burger anywhere else.