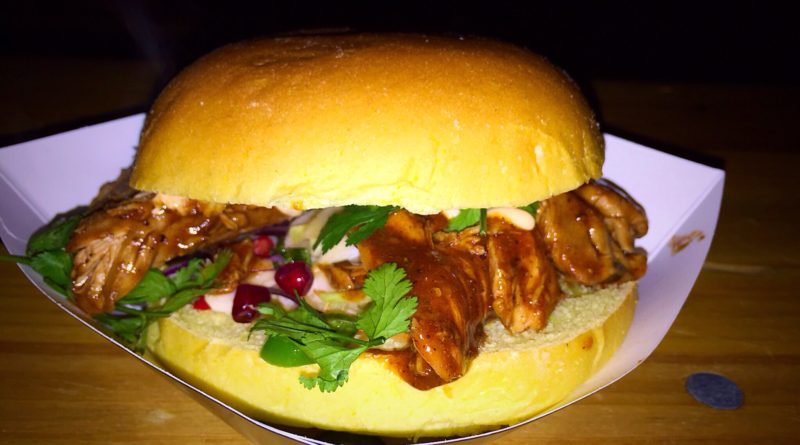 Review of Love From The Streets, Manchester Jerk Chicken Burger

Food must be fun! If you don’t enjoy it then why would you come? and for us to love it is to live… The current Street Food Trend has set us free from those static hidden kitchens that are often life for a chef…

I’m going to start this review at the end. This is the best tasting burger I’ve had this year so far, and although it’s only April, it’s going to take some incredible burgers to take the crown from this, certainly amongst chicken burgers.

Now, there are some people who might think that it’s not a proper burger unless it has beef. But while I enjoy beef immensely, there’s certainly plenty room in the burger world for lamb, pork, duck, venison and of course chicken (veggie burgers and bun less burgers I’m not so sure about).

Anyway, let’s go back to the beginning.

Burger Lad® appointed me Executive Street Food person, which makes a brilliant job even more brilliant. It also makes it harder, because although “street food” traders tend to be at the forefront of taste innovation, they also tend not to stay in the same place. That makes tracking them down harder.

That is certainly the case with Love From The Streets, who we’ve been tracking on Twitter for a while, but until now haven’t been able to go to any of the events (largely weekends and evenings) that they’re at. Until now!

Love From The Streets is the brainchild of Jason Latham, former head chef at Solita, a place we know well as captains of innovation.

Chef Jason runs a number of mobile food ventures, also doing weddings and corporate events, and I believe is looking for a more permanent location in Manchester.

I tracked him down at the Friday Food Fight, run by Beat Street Manchester in the city’s cavernous Great Northern Warehouse.

And “great northern” is an apt label, because it is people like Chef Jason who are putting Manchester at the forefront of Britain’s 21st century food Renaissance.

While writing this review I had problems finding the right positive adjectives to describe it (a similar problem exists with negative adjectives and the SNP).

The words you are about to read do not really do this enough justice and I may even need to resort to that awful Americanism “awesome”. The pictures also don’t do it justice, and that’s due to the darkness of the venue.

Stepping into the dark cavern that is the Food Fight, I was struck by the student nightclub atmosphere. Very large, very dark, and seemingly aimed at youths with skin tight jeans, slicked hair and copy-and-paste beards. Clean-shaven and over the age of 22, I felt a bit out of place.

Straight over to the Love From The Streets counter and put my order in. It was put together in front of me and that was that. The advanced prep is clearly the time-consuming part here.

I sat down and was disappointed by the darkness, knowing my photos were going to need flash and that doesn’t turn out so nicely. It’s a shame too, because I’d peeped in before opening time and it was a lovely bright space. Again, the darkness is probably aimed at the legion of 20-something beards.

So anyway, I apologise for the photos. The “beats” were also loud and downright annoying too.

But that wasn’t why I was here. Of the three elements, beats, booze and food, I guess you probably had to enjoy at least two to fit in. I was driving, hated the noise, and therefore was only enjoying the food.

This burger is put together with chunks of jerk chicken, slaw and mango sauce. Simple, effective, different and delicious.

In fact, the combination of adjectives I’ve just listed reminded me of Viet Shack’s lemongrass chicken burger, which was interesting as they were in fact at the very next counter (minus any burgers).

The bread was probably the weakest link. Adequate but nowhere near the quality of the ingredients inside it.

The slaw was fresh and crunchy, and very, very tasty. A pot of this on its own wouldn’t go amiss! Anyone who says slaw doesn’t belong on a burger is wrong.

The mango sauce too, was subtle and tangy. A perfect balance of flavours here because the main attraction was the chicken.

It was cooked perfectly and was dark and dripping, belying its jerk coating. My god this was good stuff. There was an obvious but not overpowering heat to it and it had that rare sort of flavour that made each bite increasingly more desperate.

Absolutely amazing burger which did not last long, although the flavour and the heat lasted a good while on my tongue and I love it when that happens.

And let me reiterate that the brevity of the review and poor quality of the pictures are entirely due to the darkness and me hardly being able to see to eat, let alone write and take lovely pictures. They say a picture tells a thousand words but in this case the pictures say nowhere near enough.