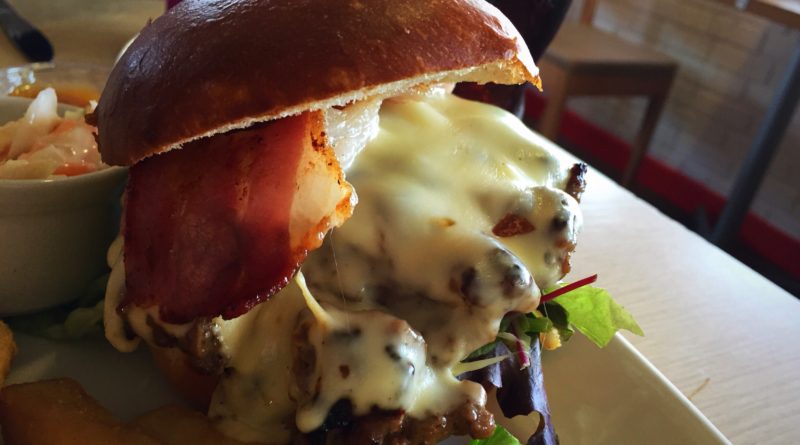 Our burgers are 100% British Beef, fully certified and prepared by our own butcher. We cook them to order so they’re always fresh and tasty! Mature cheddar cheese, back bacon and a dollop of garlic mayonnaise.

Hello and welcome to 1983. A time before the Internet and a Little Chef and Wimpy in (or near) every British town.

Not by the hair of my chinny chin chin.

Inspired by Burger Lad’s recent foray into British dining icon Wimpy, I decided to re-visit another of the old classics.

Once a staple of towns and A-roads from Aberdeen to Aberystwyth, a large number were shut down or turned into Burger Kings, allowing the company to concentrate on the more profitable branches.

It actually has been about 30 years since I was last in a Little Chef and my perception is that it has been well and truly overtaken by more interesting offerings, and by more powerful marketing machines.

But Little Chef is still very much alive and kicking and it’ll be interesting to see how it fits into this weird old 21st century of ours, with more discerning tastes.

First up, it’s very much alive on the Internet – seeing the menu in advance on your Spectrum in 1983 was never an option.

It looks like typical British diner fayre – cooked breakfasts, gammon, scampi and the like, with the very obvious US import – burgers. The Works is their signature offering but I don’t feel hungry enough for 12oz of patty so I’ve decided to have the garlic mayo burger (sorry Miss Milkshake).

It’s a 6oz bacon cheeseburger with garlic mayo for £8.99. Little Chef is still using the 80s pricing tactic of 99 pence rather than round numbers.

Stepping inside, the decor wasn’t quite 1983 but it was hardly 2015 either. Nor was it tidy, unfortunately. 5 active covers with 3 tables awaiting clearance – a symptom I suspect, of the apparent understaffing. Not at all the fault of the very friendly and helpful, but overworked waitress. I would have to blame whoever did the rota.

It’s a rather mixed set up, a sort of evolution of the transport cafe with breakfasts at the heart of the menu. Cheap furniture, evidence of the alcohol licence on display, a selection of leaflets on local attractions, and a pile of AA road atlases on sale.

The waitress took my order and I wasn’t asked how I’d like my patty cooked. I really think that means it’ll be well done.

There was a bit of a wait – there seemed to be as many people in the kitchen as FOH – but my burger did come out and presentation was very respectable with focus clearly on the mayo, or so I thought.

Diameter-wise, it looked small, but quite tall, ideal for lunchtime, but again due to the staffing issues, it sat for quite a while on the counter before service. I was very close to going over to collect it myself before the kitchen lady picked it up and brought it over herself.

It looked very decent, top slightly askew to display the contents. What I had assumed, from a distance, to be the mayo, was actually the cheese and the mayo was served separately in a little pot. I scooped a load of it on, and got stuck in.

The bun was pretty good – looked the part and remained strong enough to keep stuff in. The bacon was very generous, although the thick cut type which I imagine came from exactly the same place as the bacon in their breakfasts.

The patty was largely obscured by lashings of cheese, although big knobbly chunks sticking out the sides looked quite promising.

Aesthetics stood head and shoulders above taste and execution though. These knobbly chunks were overcooked, as was the rest.

The wording on the menu – British beef prepared by our butcher – seemed to confirm what I already thought – that these patties were prepared centrally and shipped out to all the branches – frozen maybe, refrigerated probably. I’d love to be wrong though.

Now, I know it is logistically difficult for a national chain to produce its patties in-branch, but not impossible. It’s maybe a cost issue that seemed to go hand in hand with the staffing issue. This really did seem to be bare bones stuff.

Not awful, I must add, but bland and with considerable room for improvement, rather like the dowdy decor. On this particular burger, the negative aspects of the patty were largely masked by the toppings, but would be much more noticeable on a plainer stack.

The burger as a whole was passable, just, despite the patty, as there was a good bun containing generous and reasonable toppings.

Little Chef hasn’t lasted 57 years in Britain without offering something that people want, and that’s fair enough. Maybe I’m too picky – I suspect this will suit the majority just fine, and it’s quite possible Little Chef has identified its target market well.

However, the rather depressing decor and bland beef mix seemed to suggest an operation with low margins and lower aspirations.

It’s a great shame, because there’s definitely potential – higher quality food, a more upmarket feel and better staffing levels could make this brand truly fantastic as it was in the early days.

Maybe in another 57 years….