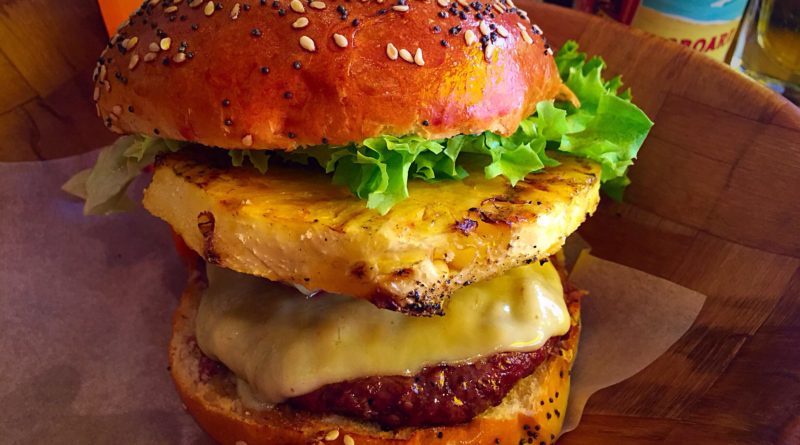 All our burgers are lava-grilled, juicy, medium & served on our golden seeded bun baked daily just for us, with tomato, crisp lettuce, grilled onions & mayo, unless requested otherwise.

I’ve been before to Kua ‘Aina near Carnaby Street. That was pre-Burger Lad®. Now they’ve opened a new, larger branch on Goodge Street in Fitzrovia.

At first glance it’s much the same – a few outdoor seats, primary colours and of course surfing decor, being a Hawaiian brand.

Fresh off the boat, as it were, from my experience at Rehab Burger Therapy in Arizona, which also does burgers and surfing, I was in the mood for this sort of thing.

In, sat down and order taken by a very helpful and friendly waitress. She recommended a few things including the fish.

But burgers are the name of the game here and they come in either a third or half pound sizes, with a range of customisable toppings.

I ordered pineapple and cheese (cheddar). The pineapple seems almost de rigour for this sort of theme. Bacon, avocado and mushrooms are also available.

I was asked how I’d like it cooked. “Medium” please, I answered almost before she’d finished her sentence.

It has been a couple of years since my last visit and I’ve had burgers at one or two other places since then, but I can remember the very friendly welcome and tasty food quite well.

The acute space issue at the other branch is less noticeable here. The burger arrived in a wooden basket, presented open, with each half of the bun facing upward.

It was also presented with a large piece of skinned carrot, which is probably a first. It looked, and smelled, very fresh. It was also quite a tall stack once I’d put the two halves together. This was due to the patty, the hefty pineapple ring and the onion, which was done in a large chunk – again something that is uncommon.

Onions tend to be chopped or ringed, so the inclusion of a large piece like this gave a very distinct taste and crunch to the bites that included it. Marvellous.

The pineapple taste was very distinct, as you’d expect. This didn’t look like some supermarket-can-sized ring either. It was a lot bigger than that.

Because of the open format, it was very easy to discard the tomato. I didn’t want it messing about with the taste of the pineapple. I left the lettuce in though – it was a large leaf.

Everything about this was big. Big onion, big lettuce, big pineapple. I’m glad I didn’t take the half pounder.

The bun was multi-seeded and was as easy on the eye as it was on the tongue. The only slight issue was that the bottom half soaked up all the juices and got progressively thinner and weaker until it pretty much disappeared.

Easily solved by turning it upside down!

The pineapple was downright tasty with a satisfying rip in the texture of the bite. Its slight sourness was gloriously offset by the slightly sweet BBQ sauce, which had come as a side dish and which I’d liberally spread around.

The patty though. Oh that beef. Wow. This was good stuff. The meat was cooked perfectly medium and the texture was fantastic.

You can see it hopefully in the photos – strands of perfectly tender beef and that comes through loud and clear in the taste.

On the face of it, not a massive burger menu at Kua ‘Aina, but with customisation there’s really hundreds of options and when the quality is this good and the place is this welcoming, you’d be daft not to visit.