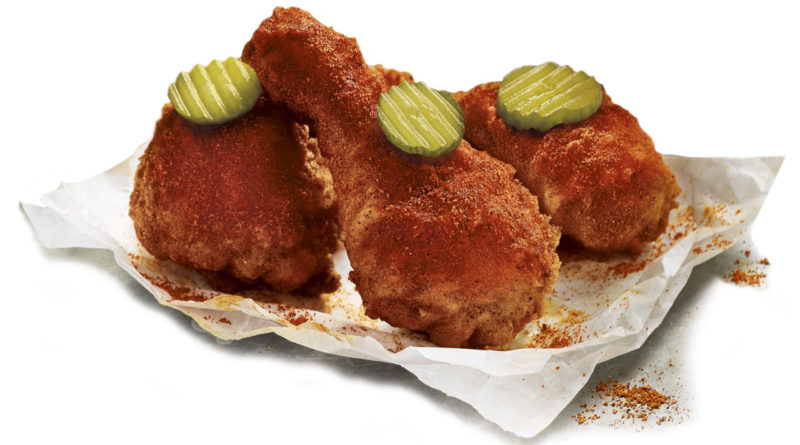 Smart KFC fans like you, will remember that we were first to bring you news of the latest promo at KFC – Nashville Hot Chicken (original post below this review).

First to note, although there are different piece size options available, there is no burger.

I find this a little odd, especially as the original US version includes pickles (burger topping) and white bread (burger bun).

In the absence of a burger, I’ve chosen the smallest option, which is two pieces of Nashville Hot Chicken, which includes a drink, fries and a side at £4.99. 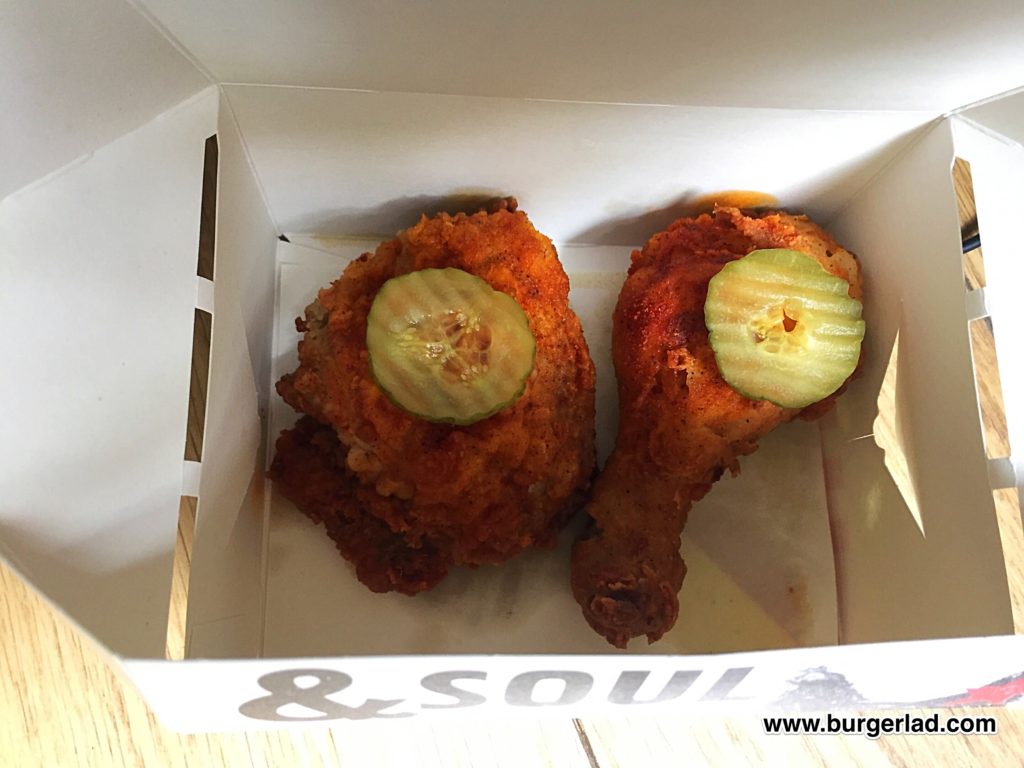 As much as I love KFC and their innovative menu development, I would love someone there to sort out their fries. Compared to competitors, they are limp and insipid and I usually end up leaving them.

But onto the chicken.

By incorporating Nashville Hot onto the UK menu, KFC has decided to include the pickles but not the white bread from the US version.

The pickles and the different coating are the essence of this promotion, and whether it is good or not is going to boil down to two things 1) do the pickles add anything and 2) is the coating tasty?

First off, it looks different.

Obviously the pieces of chicken have the pickles on them, but the pieces themselves are a different colour. Very red, even more so than the Zinger which is a little pinker. 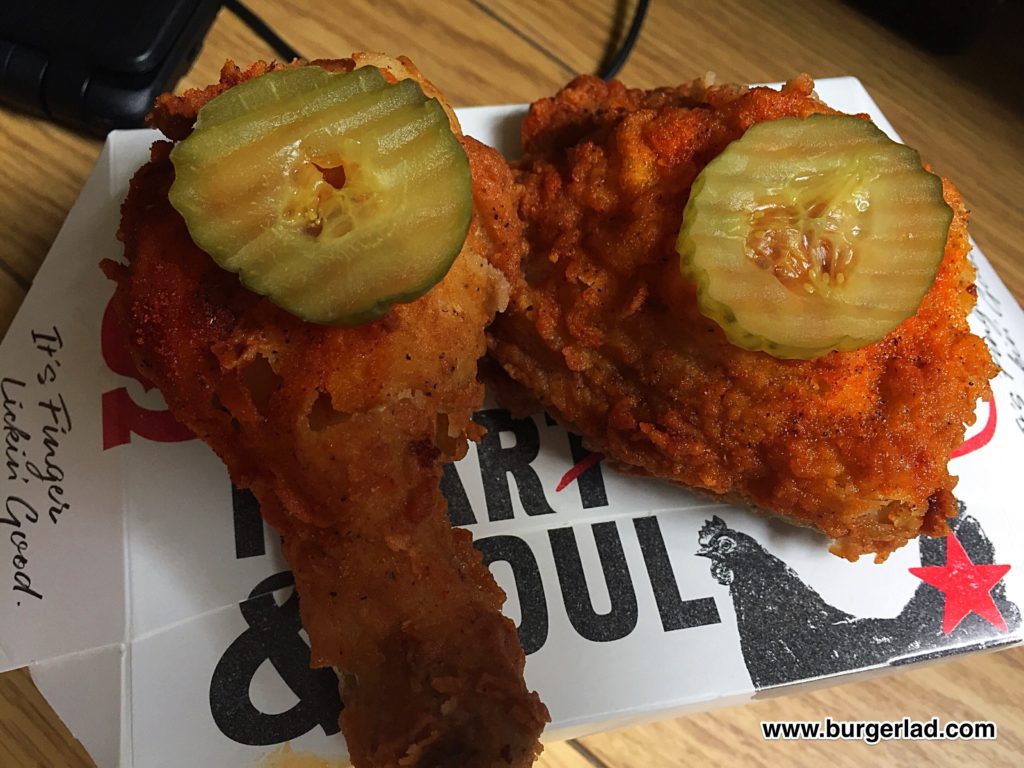 I think it looks pretty good and very inviting, and you know what – there’s even a slightly different smell before you even get your mouth onto it.

Biting in, I was rather surprised. This was not as spicy as I had been lead to believe. Not at all.

There was definitely a kick that raised it above KFC’s usual secret recipe, but nowhere near the levels of my beloved Zinger.

Rather, what came across the most was the sweetness. This was a lot sweeter than anything else on the menu and as such was very distinct, just not in the way I’d imagined. I liked it, but I was beginning to wonder if I’d rather have the Original Recipe back in its place. 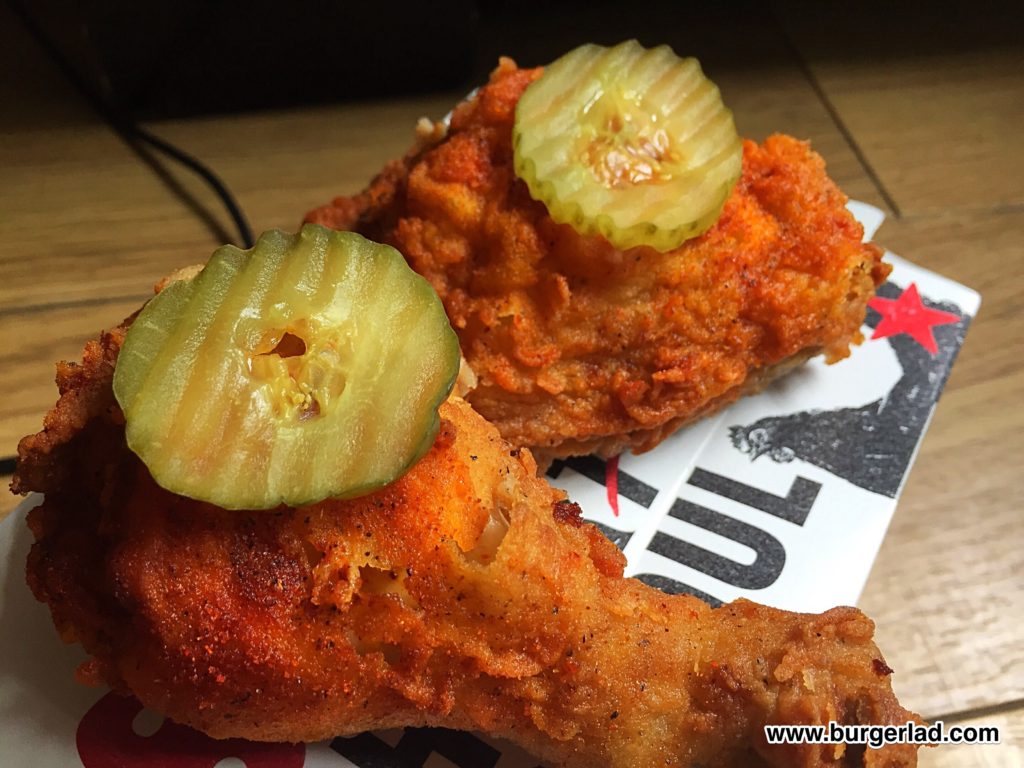 Pickles are obviously included as they have always been a staple in the original Hot Chicken recipe hailing from Nashville. It just feels strange trying to eat the combination.

You have a whole piece of fried chicken – a thigh or a drumstick – and a pickle. So either you eat the pickle separately or you have to balance it on your chicken and you get one bite that includes the pickle while the rest don’t.

Am I missing something?

So, yes I got a single bite of each piece of chicken that included a pickle, and it tasted exactly like fried chicken with a pickle would. Interesting enough for a one-off but I just don’t get the appeal. 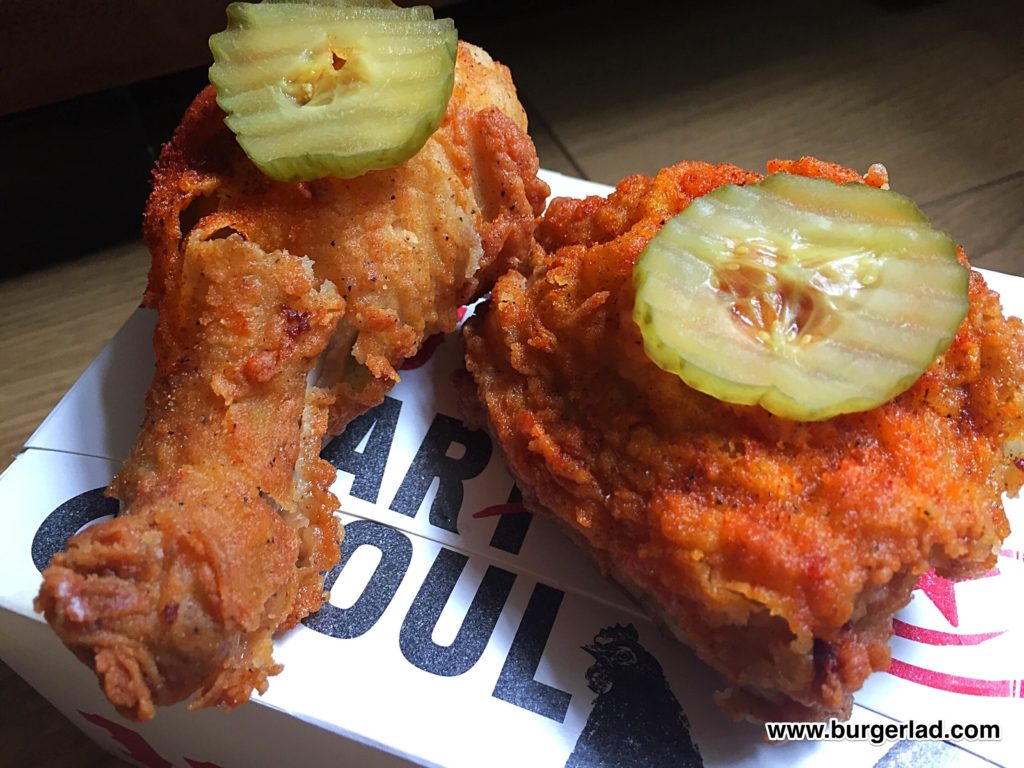 Don’t get me wrong – this very limited edition chicken from KFC is not only very tasty, but it’s really exciting to see them adding a US item to the UK menu.

Although, looking at the US promo pictures vs. what I received today, I can’t help think we haven’t got the real deal.

I’m led to believe there are a few more very exciting products on the way from The Colonel from the end of July onwards so stay tuned to BURGER LAD® for updates.

The Nashville Hot chicken though – I’d recommend you get it while it’s here.

You can add a single piece to anything else you might be having, for £1.19. Just don’t go in with stratospheric expectations and you might just enjoy it.

Nashville Hot chicken is available in KFC restaurants nationwide from 22nd May to 18th June, subject to availability.

Prices below subject to variation:

The rumour mill is swirling at BLHQ – KFC is possibly bringing Nashville Hot Chicken to the UK in late May.

What is Nashville Hot Chicken?

Hot Chicken is a local speciality of Nashville (the capital of the U.S. state of Tennessee) and is generally marinated in a blend of secret seasonings then floured, fried and rubbed with a water-based paste that has been spiced with cayenne pepper.

It is always served with a side of pickles and white bread.

KFC added Nashville Hot Chicken to its U.S. menu in early 2016 following a trial run in Pittsburgh in autumn 2015, calling it “the most successful product testing in the company’s recent history”. 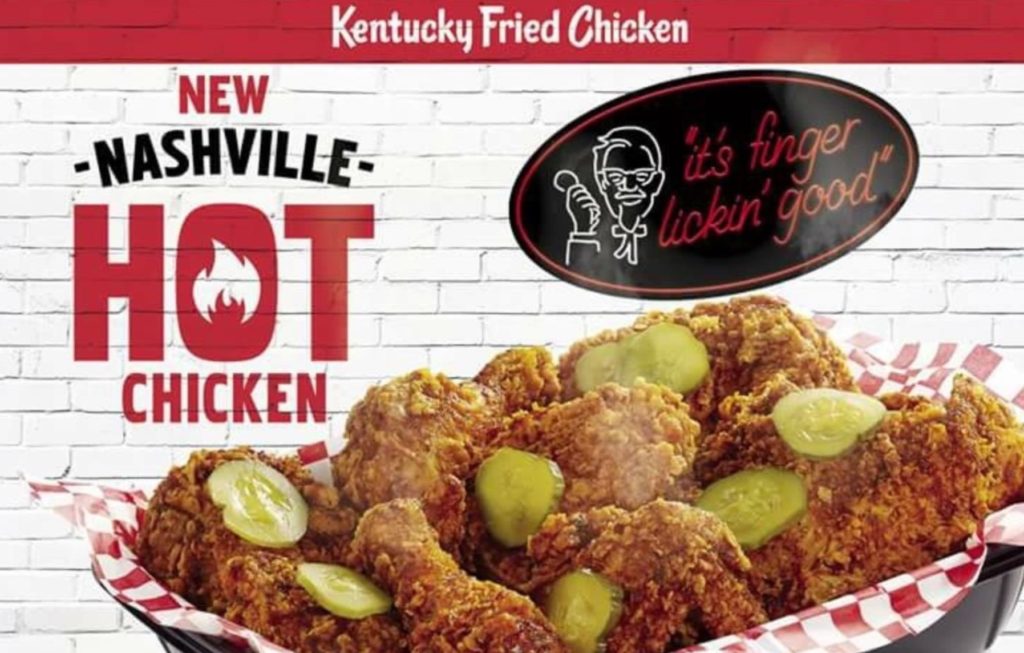 KFC describe their version as “A Spicy bird with a savoury burn – The Colonel’s latest creation was inspired by one of Nashville’s most famous dishes. Featuring a perfect blend of spicy cayenne and smoked paprika, it’s available in tenders, Chicken Littles™, and Extra Crispy™ Chicken.”

In early 2017, KFC also launched Nashville Hot Chicken in India, so could the UK be next?

The popular fried chicken chain recently tested the Texas Ranch and Alabama Cheese burgers as part of a ‘Greats from the (Southern) States’ promo so this could be a good fit.

Pickles were also recently on the menu too on the Dirty Louisiana, but we’re not sure if/how the white bread would come into play…

We cannot confirm at this time if there will be a burger (India had a Nashville burger on the menu), but we believe that this will come as a bucket option.

Whatever is launched, you can guarantee we will be there to review it!

The USA also got another regional variation called Georgia Gold Chicken, so if we do get Nashville Hot Chicken and it is successful, maybe we will see that here too?

In the meantime, take this as rumour… but our source has been 100% correct on two previous occasions. 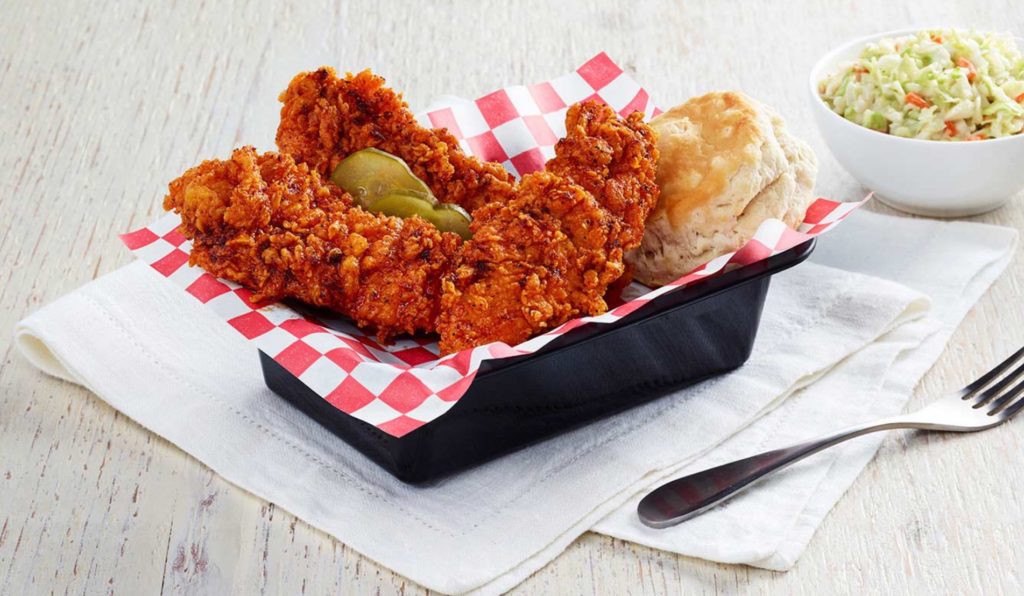 THIS JUST IN FROM KFC…

KFC scoured its homeland, the Deep South, to find the best authentic new taste for its chicken on the bone recipe.

For all those chicken traditionalists, fear not, the Original Recipe chicken on the bone is still available nationwide. KFC will bring the Nashville Hot flavour sensation to the UK for a limited time, so get in there quick, you won’t be disappointed.

The epic Nashville Hot chicken is thought to have been created by the Andre Prince Jeffries family, owners of Prince’s Hot Chicken Shack, which is still doing a roaring trade in Nashville.

Legend has it that Andre’s great uncle was a bit of a ladies’ man and after a particularly late night out, his girlfriend made him fried chicken with extra pepper as revenge. As luck would have it, Andre’s great uncle loved the dish – he went on to create his own recipe and open a chicken shack selling the hot chicken which is still sold in the family today. 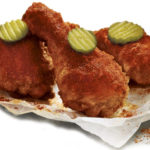 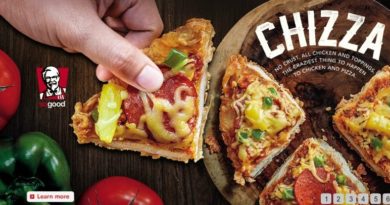 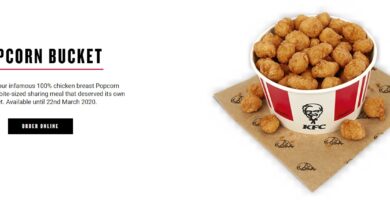