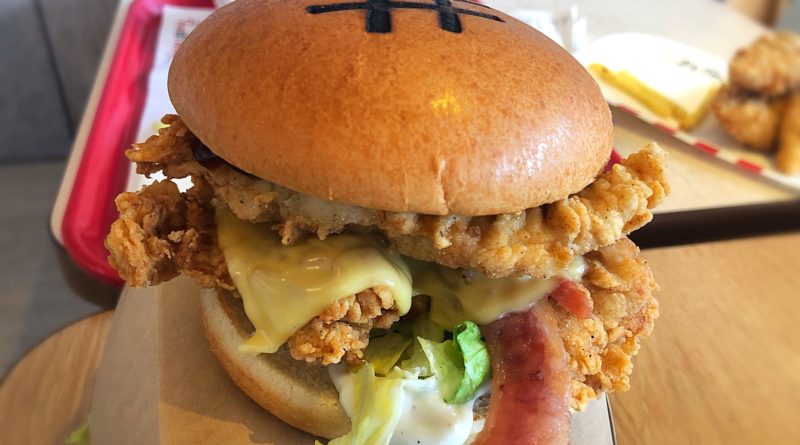 The culmination of an employee competition run by KFC is one burger in one store on one day – the Hashtag Burger.

And it’s for-sale on a retail park just outside Bolton. The Dragon’s Hen news was first given to us by BURGER LAD® back in December and then it all went rather quiet (probably due to the much publicised supply/delivery issues) until the tweet below stirred the Dragon…

All of a sudden, the aforementioned Hashtag Burger frenzy went into motion.

The winner, Rick, is a KFC head office employee who was the manager at this Bolton branch 3 years ago.

As this was where he started his career, it makes sense to have the very, very limited run here. 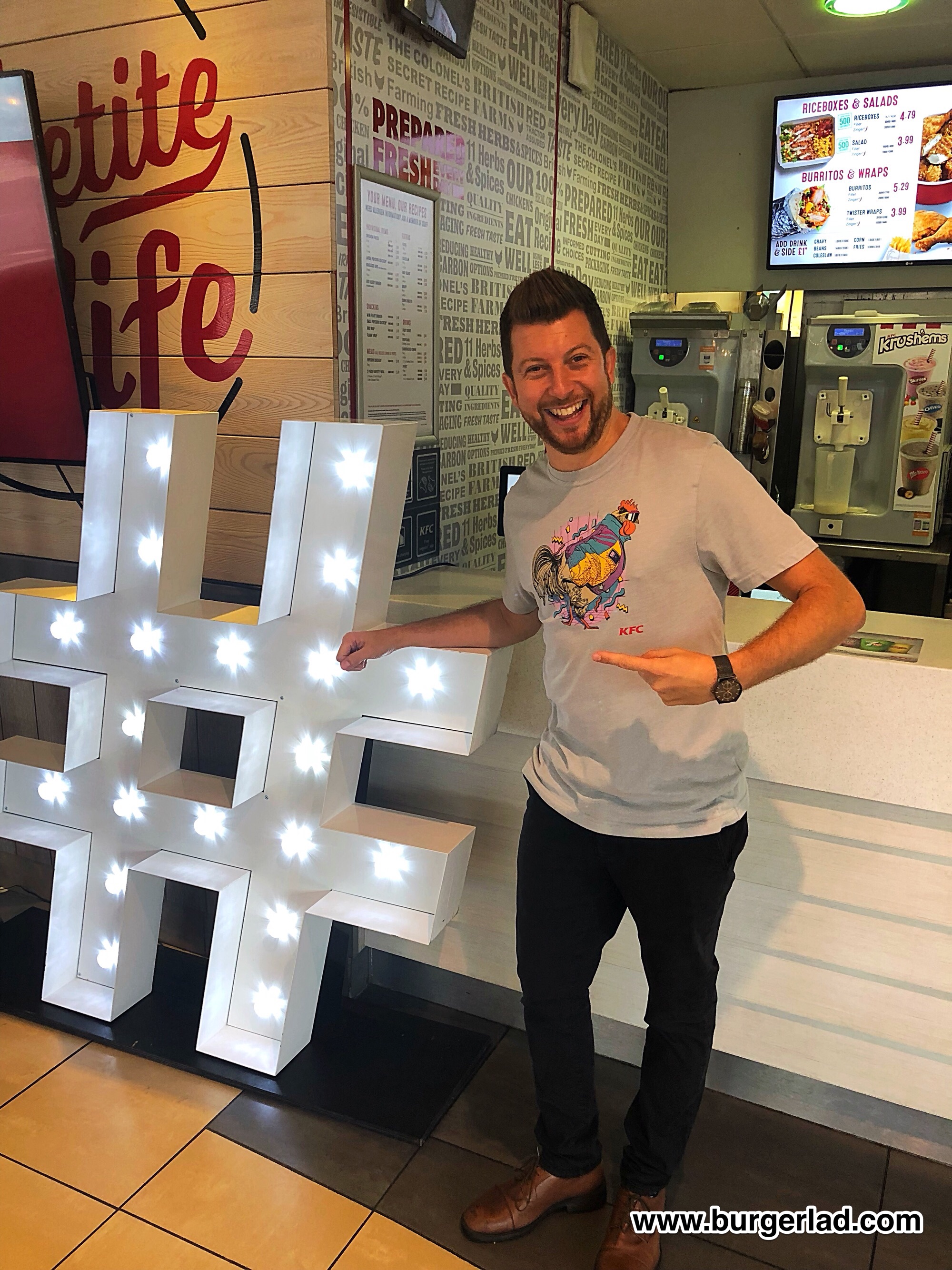 What makes less sense, is given the expense of special buns, special boxes, an in-store set up involving a large screen and a hashtag light display, as well as shipping in some head office folks with their laptops… will this burger actually make KFC any money?

Maybe that’s not the point, but we aren’t here to investigate the business decisions. 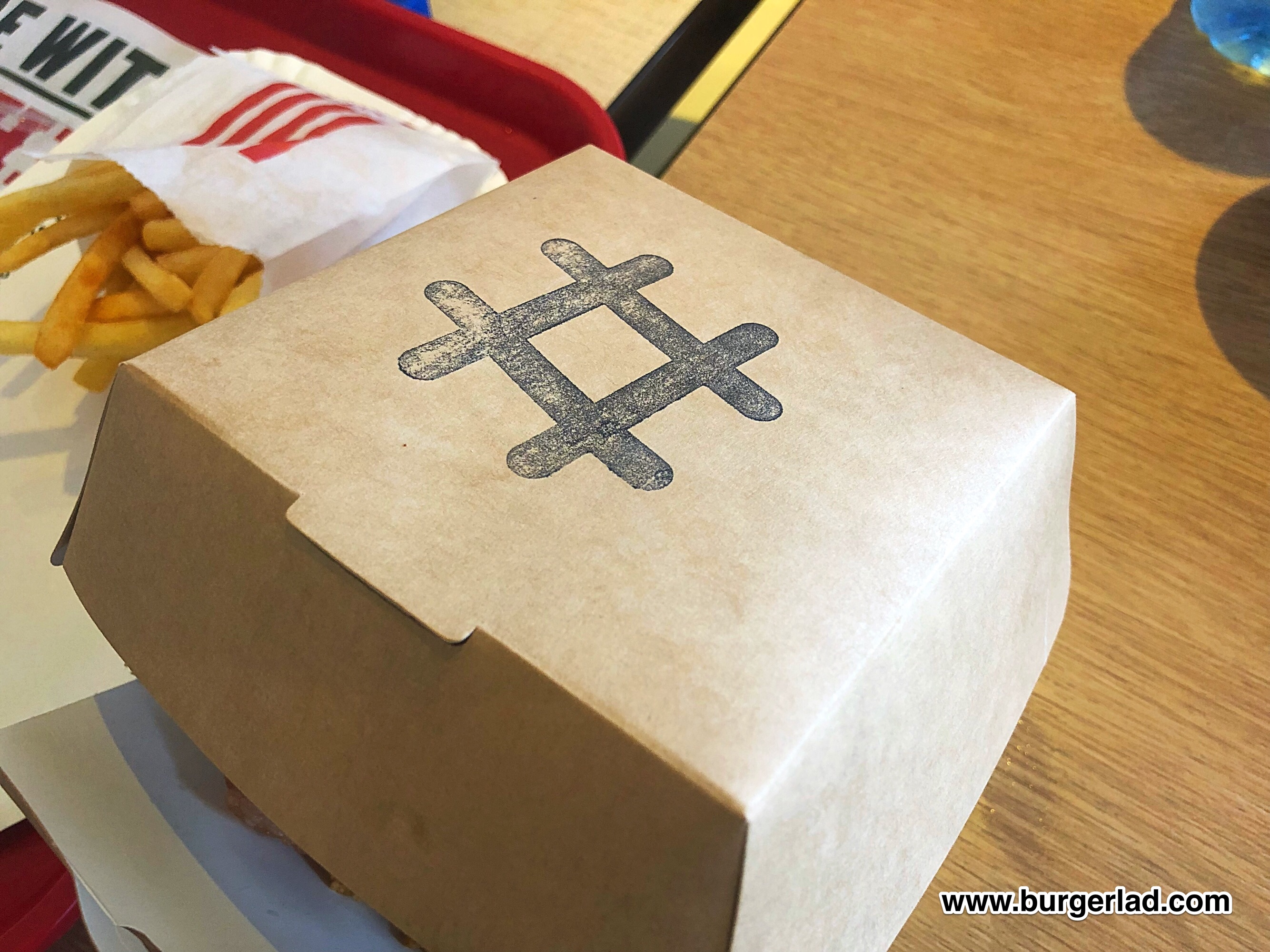 We are here to investigate the Hashtag Burger, folks, and let’s all be very happy that they reacted to Burger Lad’s tweet and got this promo moving because I can tell you now that it is a pretty good offering (strengthening the sadness that it’s only available for one day in one location).

Still waiting for the winner of Dragon’s Hen @KFC_UKI https://t.co/LUF0sub7rY

The promo photos do make it look extremely good, although my concern that the gimmickry of four mini fillets in a hashtag shape might slide out, while a more standard larger piece of chicken might stay in place more.

I was told it would take about 3 minutes and it was closer to 10, but it was brought to the table by Rick himself, which was a nice touch. 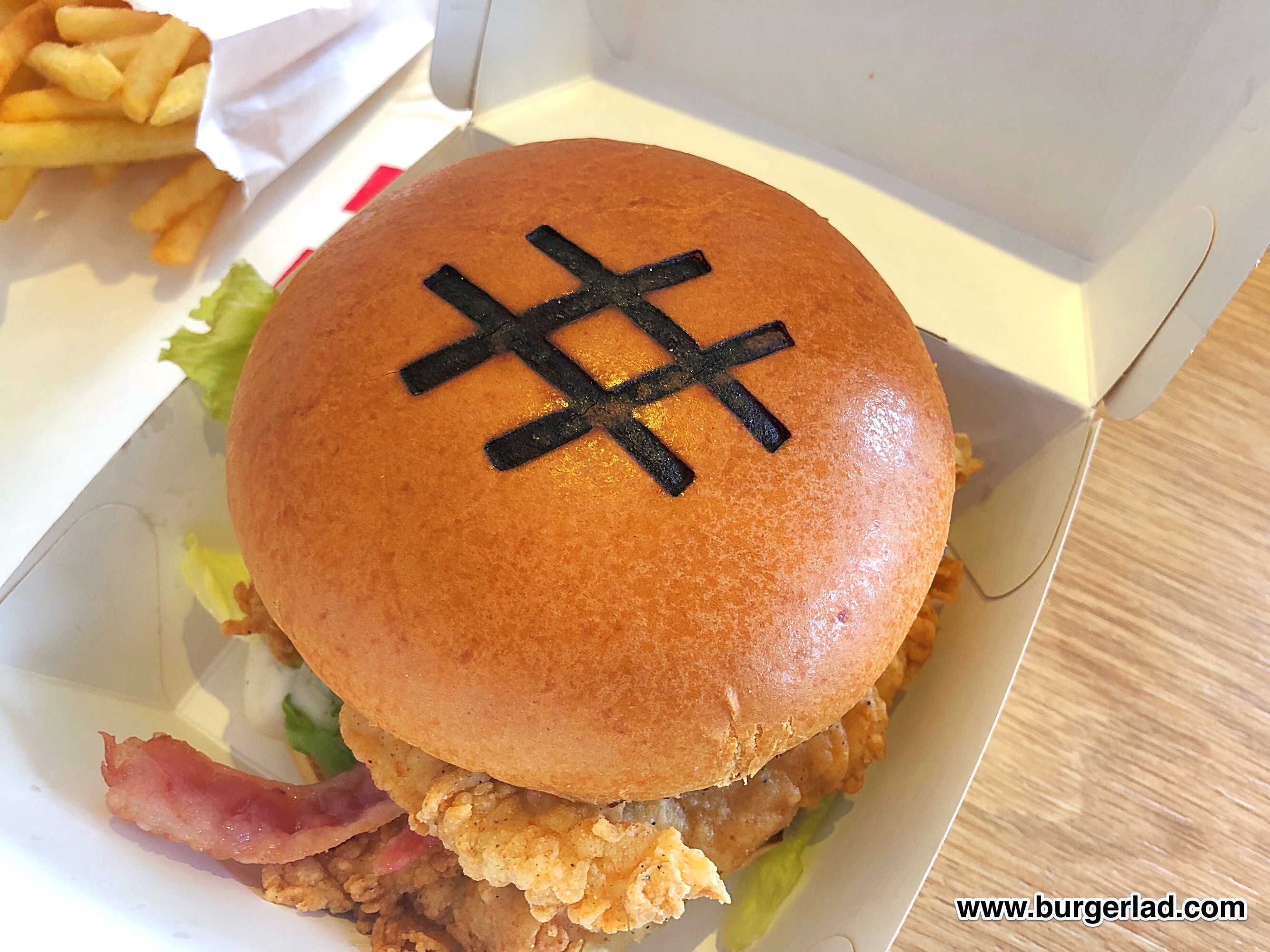 At this point it was evident that the promo photos had been filtered to add vibrancy as in reality it was a lot more beige – this on a burger originally described as “no-filter needed”.

That said, the hashtag branding on top, whilst adding nothing to the taste, stood out visually, and of course it came in a specially hashtag branded box.

I can imagine all the KFC branch and HQ staff being quite #bored of the word “hashtag” by the end of today.

When I first read the description of it, it was the ranch sauce in conjunction with the BBQ that stood out for me. 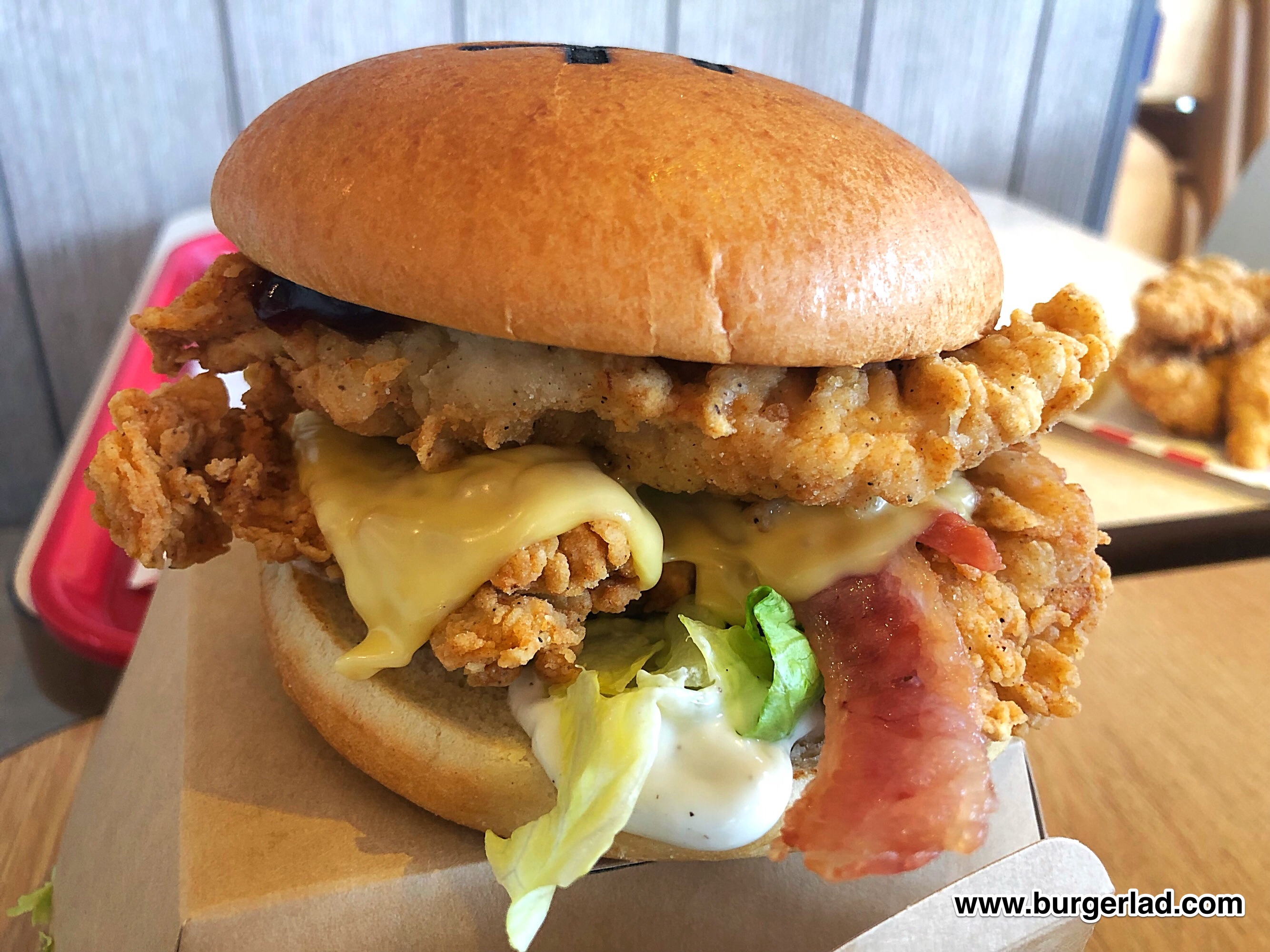 If we strip out the branding and the sauces used, what we have is the KFC bacon cheese, so taste-wise, these are what this burger will hinge on.

The hashtag shtick of course is pure Instagram (“no-filter needed”) and that’s fine, but lifting the lid and looking at the contents of my reasonable build, if I didn’t know the chicken was supposed to represent a hashtag (that word again) I simply wouldn’t have known. 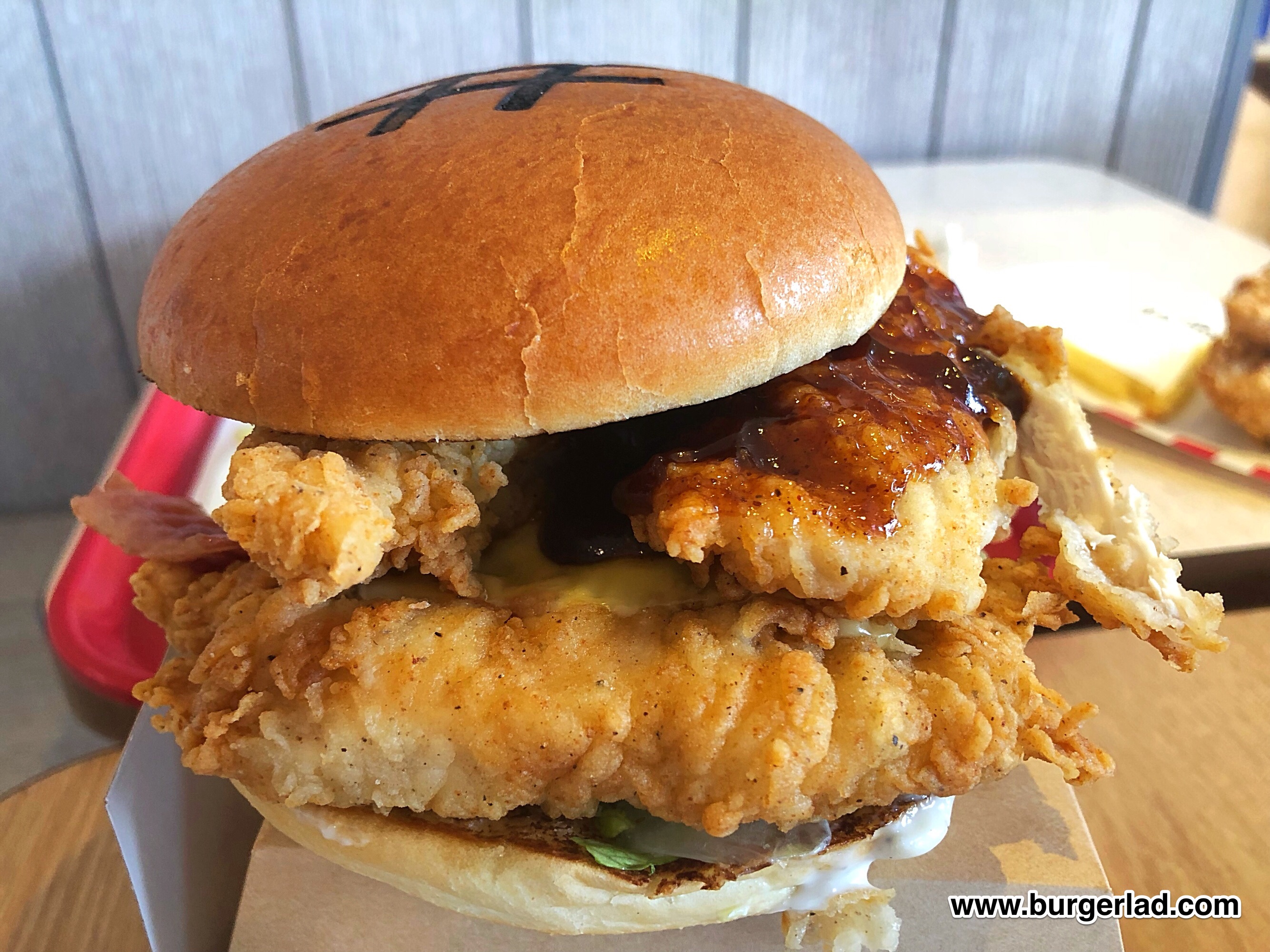 Biting in, I immediately got that savoury hit from the ranch sauce – an ingredient which is hugely popular across the pond and yet relatively niche (on the high street) here.

The sweet clawing BBQ sauce, on its own bordering on too sweet, but working here rather well in balance with the ranch.

You can’t help but think back to the original sauce pairing in the voting competition and ponder “what if” – it would have certainly made for a very different burger!

But the sauce combo does work and is the core twin-riff of this build and what elevates it to the rank of something special.

You could build this without the hashtag stuff, with a full size chicken burger instead of smaller pieces, and that taste whammy would still be there. 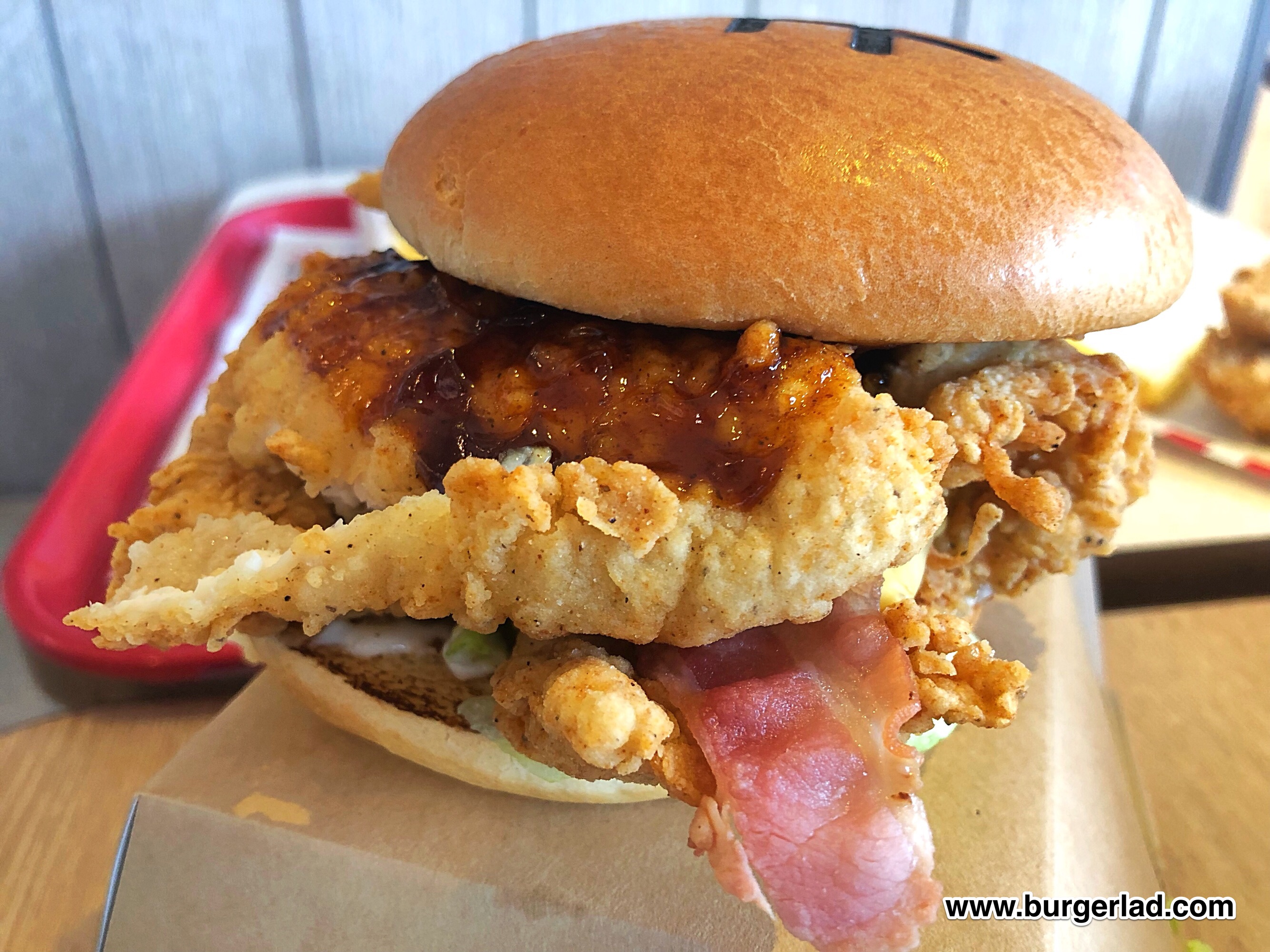 It is rare for lettuce to make a dent on the taste buds and here is no different. I saw it but didn’t taste it. With four not-so-mini chicken fillets and all that sauce, it is hardly surprising.

In the centre of the “hashtag” was the cheese and bacon. Neither stood out in any lofty manner but both were noticeable and arguable necessary for the flavour balance.

The chicken-heavy flavour needed a little countering and this was provided for.

And speaking of that chicken, it was as good as ever – Boneless mini fillets that I’d quite happily eat on their own.

Finishing this off, and scribbling some notes, it was very much the ranch & BBQ that remained on my tongue and a future incarnation of this without the hashtags could easily be named the BBQ Ranch burger or similar. Or the Texas Ranch Burger…

That sauce combo wasn’t just helpful, it was vital. I left the marketing bubble with a very happy feeling knowing I had really enjoyed KFC’s latest (extremely) limited edition. 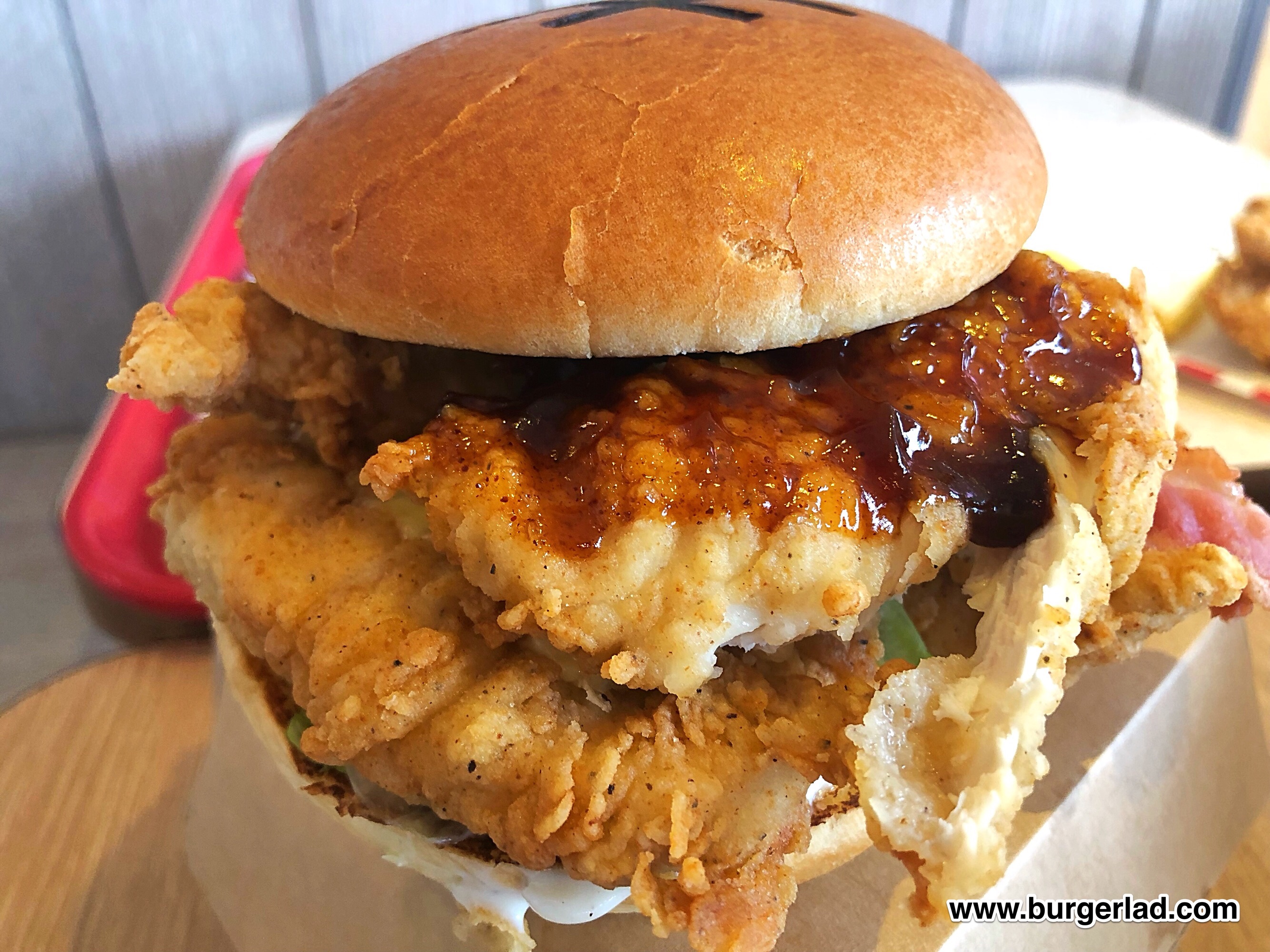 It would be wonderful to think this idea of employee creations wasn’t just a flash in the pan, so Jack, if you’re reading this – it would make a tremendous annual event.

But please, please can we a) stick to the original creation as intended and b) make it more widely available.

By the time you’re reading this, you will have only a very short time to get yourself to Bolton, or indeed you might be too late. But if you got one, let us know in the comments what you thought. 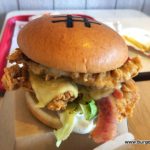 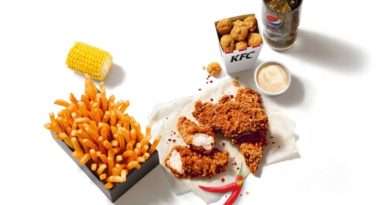 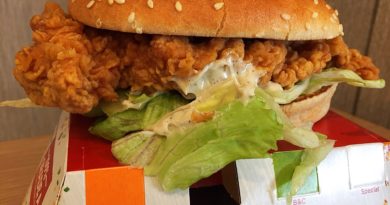 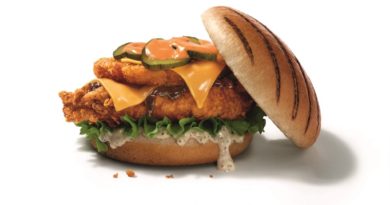 One thought on “KFC Hashtag Burger”