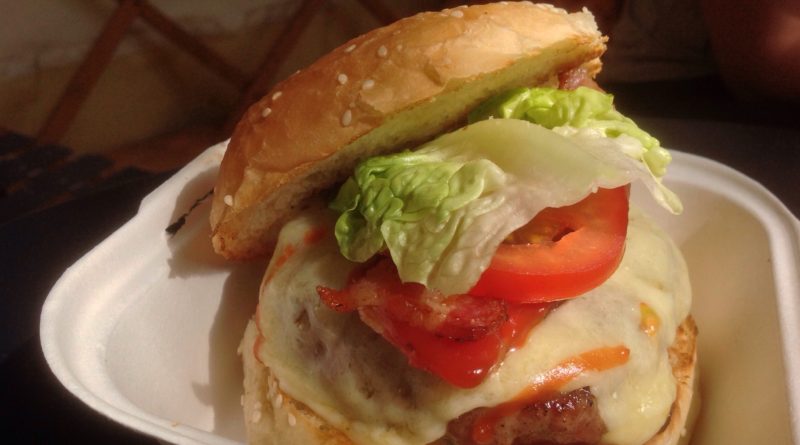 We were recommended Jolly Nice by a pair of foodie friends of ours. Tucked away on the roadside on the A419 between Cirencester and Stroud, this is an old petrol station converted into Farm Shop.

As well as the shop, they have a cute vintage-style Airstream trailer which serves hot food. Obviously we had made the trip to try their signature Jolly Nice Burger which has garnered a growing reputation.

Set in idyllic Cotswolds countryside on a beautiful summer’s day and with a beautiful Yurt on the grounds, you couldn’t get a more picturesque location for a roadside burger.

It was around lunchtime we arrived on Saturday and there was already a few people waiting for their food.

On the menu alongside the Jolly Nice Burger is a veggie option, bacon and sausage baps and a pulled pork roll, but it seemed that the burger was easily the most popular choice.

Now I must admit that we waited 20 minutes in total from placing our order to receiving our food. I would put that down to a girl who had placed a mammoth order before we got there – I think it was to feed some competitors in the nearby Tough Mudder event which had been on that day.

Even so, 20 minutes is pushing it for street food. But with the shop and butcher to check out it soon passed. Was it worth the wait?

The simple answer is yes. Yes it was. It was jolly nice indeed and an absolute bargain at £5.95.

The 6oz beef patty (I could have sworn it was 8oz) was hot, thick, juicy and had a very rich flavour. It was almost gamey it was that intense.

The Shorthorn beef they use is very local. In fact, their meat is so traceable they can tell you exactly which farm it has come from and how it was reared.

They probably even know the cow’s name as some meats from the butcher are literally from animals in adjacent fields. You can’t beat that for local!

Anyway, back to the burger. It’s very good quality meat which packs a flavoursome punch. I can’t recommend the standard here highly enough.

Biting into the tidily constructed Jolly Nice Burger I got a crunch from the lettuce before being acquainted with the thick patty, bacon and that molten hot, creamy cheddar.

The cheese was literally oozing all over its beef host and draped itself over the patty like a burlesque girl sat on a gentleman’s knee. It had a smooth flavour and I was impressed with how much of the perfectly melted Somerset cheddar had been included on my ideal lunch.

Promotional High Street burgers often feature bacon but this was PROPER bacon and did not go missing in action like some fast food counterparts. It was cooked just how I like it, not too crispy and not too flabby but just right and it delivered a delightful saltiness to the proceedings.

Now long-time readers of this website will know that I am not a fan of ketchup and/or fresh tomato and the Jolly Nice features both.

From the website it was described as “spiced ketchup” but I couldn’t really distinguish its individual flavour. And absolute credit where credit is due, I normally can’t stand the domineering taste of fresh tomato but this wasn’t the case today.

I ate the entire burger without removing the normally offending tomato slice. I didn’t really notice the mayo either but that’s testament to the other ingredients used.

What I would describe about this burger is that it had a sweetness about it which I attributed to the ketchup and the beautiful homemade onion marmalade – it was a unique taste of a classic combination.

The marmalade was good. It doesn’t overpower or diminish but brings out the full flavour of the beef. And back to that beef. It had a lovely colour and texture and you just knew you were eating top quality which has received a lot of care and attention.

And at a shade under £6 this has got to be one of the best street food burgers I have had. I’d hope if Roly Poly were reading this they’d take a drive down to Jolly Nice and compare their shambolic £8 burger to this enjoyable experience.

Overall, the Jolly Nice Burger is exactly what it says it is.

If you’d like to give it a more descriptive name you could call it the “Fantastic, locally-sourced beef burger which is tasty, juicy and features a classic ensemble of toppings.”

And that’s what it is. A classic. No gimmicks required. Nothing added to mask an inferior patty. Just honest, good ingredients that work together in perfect harmony.

I’m not overly sure what made the bun artisan, but it was a classic sesame-seeded bun. After my first two bites I thought the heel was going to suffer. However, it held together right through until the very last bite.

I tell you what. Stick some gherkin spears on here and it would complete it to an absolute tee for me… but that’s just a minor suggestion. This is without a shadow of a doubt a very commendable burger indeed.

If you’re looking for a very enjoyable roadside burger set in stunning countryside and at a very fair price then Jolly Nice is a place you should add to your destination list very, very soon.