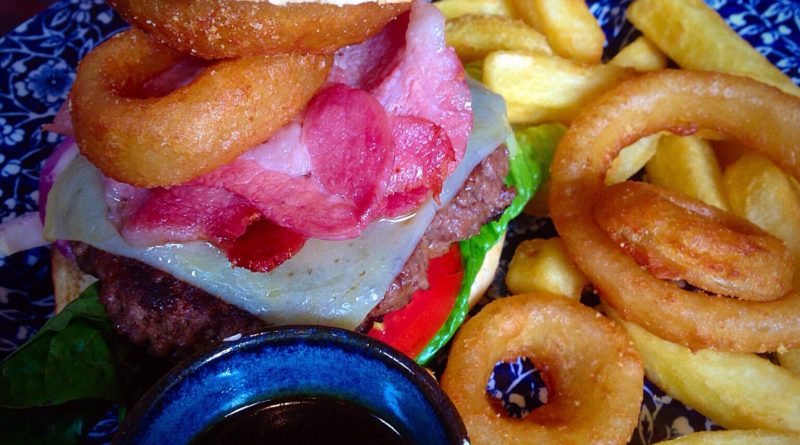 Calories: 782 kcal for the burger.

I’ve reviewed a Wetherspoon’s burger before – the Gourmet Chicken – and found it fine.

Burger Lad® had a less-than-ideal experience with their Mexican burger. So that’s a draw, I suppose, and in the interests of a tie-break, I found myself seeking out another Wetherspoon’s burger.

My table still had the crockery from the previous occupants and sure enough it was the same Great Auntie Mabel blue flowery plates that Burger Lad® noted.

Those were cleared away and I sat down with a beer while I waited for my usually-late eating and drinking companion to show up.

The table was awash with menus, offers and menu offers and so on. Everything is listed which makes choosing awfully easy.

The burgers and hot dogs include a drink (from a selection) and I had a look to see what I could have.

I had the Gourmet Chicken before. I could have the Mexican, to see if they get it right this time, but that would be a bit daft with Burger Lad® having done it so recently.

The Gourmet Beef comes with Stilton, Shropshire Blue. Blue cheese on a burger can be nice, but it’s an acquired taste that I didn’t feel like acquiring today.

That leaves the Tennessee Burger, so-named presumably because it is “made with Jack Daniels Tennessee Honey”.

It doesn’t include cheese, seemingly, but I note from the menu that cheddar can be added for a pound. I’ll do that, partly because I feel like having cheese, and partly because I’m interested in seeing how the cheddar works with the honey glaze.

The Tennessee burger comes with either chicken or beef (I’ll have the latter). It’s £6.99 with an alcoholic drink.

The sun is over the yardarm, just, so that’s what I’m having. £7.99 with the cheese. Stoptober? To hell with that nonsense!

Calorie-wise, it’s 660 kcal for the chicken (it doesn’t say how much for the beef, but the gourmet beef is about 150 more than the chicken, so I’m guessing about 820. Another 398 if I eat all the chips with which it comes, and 285 for the six onion rings. About 70 for the cheese.

You add it up. I have to concentrate on my pint of Krombacher.

So it arrived. Same plate etc. Enormously tall presentation, although the onion rings had a lot to do with that. Spike through it, to hold it all together.

I took the onion rings out to eat separately, and the two tomato slices, which I didn’t want.

Instantly that made the whole thing a bit more manageable. The presentation was on the same blue plate. I wonder who came up with that.

The honey glaze came in a separate little pot, requiring me to lift the burger lid, pour it on and close it in.

In so doing, I noticed the bacon. I don’t remember reading bacon on the menu, but after checking, sure enough it was there. And it was extremely generous. Just look at the pictures.

Biting in, my first reaction was positive.

The meat came through. It was good quality. Just the right amount of gristle and lots of taste.

The cheddar did what cheddar does best. A cheesy bite, strong on the tongue and encouraging more. Cheddar does this better than most cheeses, and I’m glad I added it.

Unlike Burger Lad®’s Mexican everything here had been added the way it ought.

In fact, my friend had the Mexican and it had all the salsa, chillies, and everything it was supposed to. He said it was quite good.

Wetherspoon’s isn’t going to have any Michelin stars and it will probably keep coming under fire for the same sort of thing as Tesco – taking business away from small independents. But what it does, it does well.

It isn’t among my favourite burgers but it is definitely serviceable. The honey glaze isn’t really a glaze. It’s a do-it-yourself drizzle. And it is sweet as you’d expect.

The bun is OK but the lower level begins to give up part way through. It becomes thinner and thinner until my fingers are becoming honey glazed too.

One of the menus says “Wetherspoon’s the posh pub company” which is arguably a bit of a stretch. Even if it isn’t posh, it’s perfectly fine and you can’t really argue with the prices and offers. 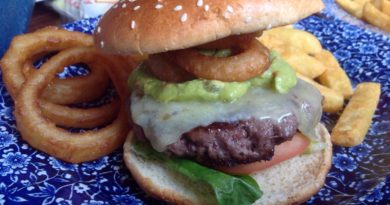 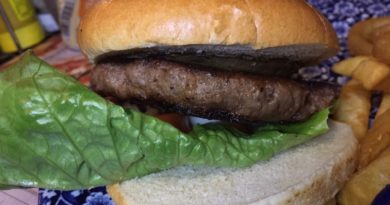 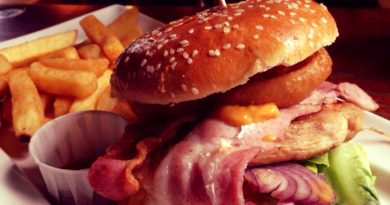