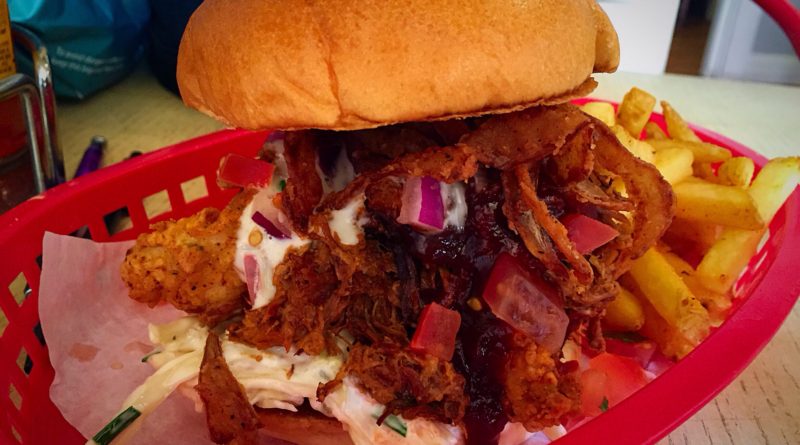 Ok, I’ll admit it, Home Sweet Home is my current favourite place. I’ve been here three times in the past week.

The menu is a real mish-mash of different things, uncomplicated and delicious.

Anyway, see the cheeseburger toastie review for a précis of the place.

I’m here today for their chicken burger South by South West – fried chicken, crispy onions, apple slaw and although I’m rather fed up of it this summer, BBQ sauce, along with some pulled pork and pico de gallo.

Finally, it’s given a blue cheese sauce, so there’s a real cornucopia of flavours going on in there.

It’s served on a toasted brioche, and along with house fries, all for a touch over a tenner. I’ll be spending more than that today though, as I’ll be taking away a couple of pieces of cake from the fabulous Bakeorama counter.

I was a bit early. The switch from breakfast to main menu is at 12 o’clock. So I ordered a chocolate shake and resigned myself to waiting.

I’d love to see more shakes on the menu here because they are really good. There are 5 premium shakes which is already great, but 3 of them have nuts. I’d love to see a good mint option there too.

While I waited I had another look at the menu, which reminded me of my minor gripe about the website.

When you look at the menu online, it scrolls automatically through the three pages and what you are reading keeps disappearing. It’s probably yet another example of my lack of technical skill, but if not, I’d really prefer to see a static version,

As I finished my shake, my takeaway cakes arrived. It took a massive amount of willpower not to start tucking into them .

When it arrived it look distinctly like it had been borrowed from hsh’s big brother, Almost Famous. Tall, held together with a stick, and ingredients all over the place. Marvellous stuff.

And as with AF, it’s the smell that gets you first.

But within two bites the whole thing had fallen apart and I was picking up my cutlery. I don’t like having to do that but at this point I was focused on the taste.

The apple slaw did a good job of muting the BBQ sauce, which from my point of view was a plus. The slaw, which some people don’t like on burgers, was nice and I do like it on burgers. Sometimes.

The brioche bun didn’t actually fall apart, it was more that all the slippery ingredients just sort of abandoned ship.

Once everything was set out in a flatter configuration, it looked like there was more pulled pork than chicken.

That was a shame, because the chicken was good. There seemed to be two pieces of chicken under the pork. I might be inclined to reduce the pork and add a third piece of chicken.

That aside, I was enjoying it. The blue cheese sauce gave a bit of bite and made it messy. Well, it was hardly the only thing in here making it messy.

I’m assuming the chicken in this is the same fried chicken as they use in the winner winner chicken dinner, which is next on my list. And it was winner.

I don’t think you’d like this burger if you don’t like slaw. It’s quite prominent and you couldn’t ignore it. Fortunately I do like slaw on occasion, so it worked for me.

It looks like a mammoth meal but actually it’s quite slim. Tall yes, piled high with all the slidey stuff, but not wide and therefore works well for lunch. With two shakes – I had the Oreo one after.

With my two shakes and takeaway cakes, my bill came to just short of £30 which is of course substantial, and I knew the digestion was going to make me sleepy in the afternoon.

But it’s another fab visit to Home Sweet Home and I’ll most definitely be back. 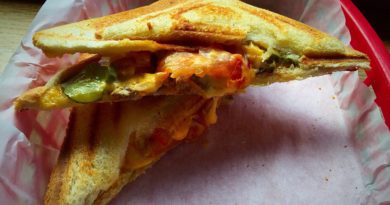