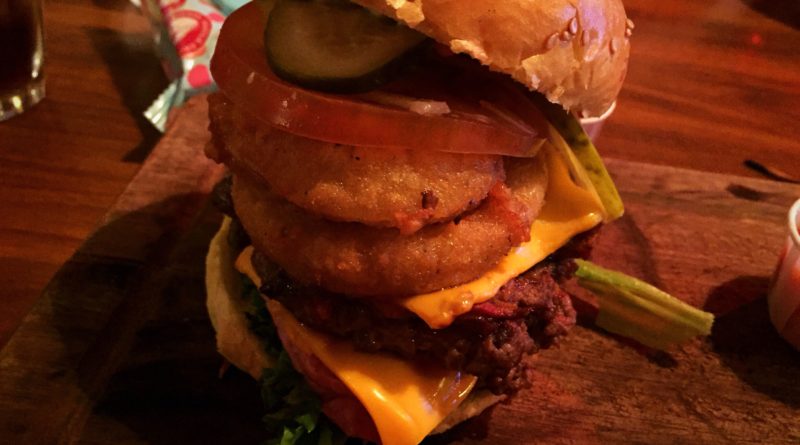 Hickory’s occupies a prime riverside spot in the centre of the well-heeled town-sized city of Chester, and is possibly the only restaurant in the town/city centre with its own free parking, albeit down a narrow lane that doesn’t suit the massive ridiculous off-road jumbo busses that the well-heeled folks of Chester seem to favour.

Hickory’s also isn’t a burger joint. There’s a lot on the menu, but the choice of burgers is basically the small one, the big one or the chicken one.

I wasn’t terribly hungry and was initially going to have the smaller Hickory’s Burger. But with the combined voices of 150,000 readers every month asking “what would Burger Lad® do?”, I ended up with the XXXL Roadhouse Burger.

I’ll get to the burger in a minute, but let’s back up a moment.

There are also clearly sufficient vents around the building to allow the mind-altering smell from these smokers to fill the air. This made it very, very difficult for me to choose a burger over some of the other delights on the menu here, with ribs probably in podium position.

It’s also a very popular mad-busy place, for this was an afternoon on a working day, and we were given a table with a stop time. This is rare, and while I can understand the practicality of it, it comes across as a bit rude even when presented politely. The servers are far too polite and friendly to say “take it or leave it” but that’s the feeling I get.

So, with the will-power of the consummate professional I am, I glance at the ribs, the wings, the Po-Boy, the Cubanos sandwich and the gumbo, and order my big burger. If there’s even a fraction of the smell of this place goes into this burger, it’ll be fine and my mind will be at rest.

A short wait – well, with a stop time to the table, it simply wouldn’t do if half of it was taken up waiting for the food to appear – and my burger did appear.

There’s really a lot going on in this burger, and as a result it was very tall and held together with a skewer.

Whether that skewer actually needed to be a steak knife, or whether that was just a gimmick, who knows, but I took it out and the stack held together reassembly well.

Most of the height came from the two large beef patties and two large onion rings, while the olfactory department was taken care of by the pulled pork it would seem. In addition to all that, there were two cheese slices, lettuce, a large piece of tomato (removed), sauce, pickles and bacon.

Carefully picking the stack apart to investigate the contents, and remove the tomato, my initial thoughts were:

1. Look at that fantastic chunky beef!

What do I mean? Well, if you think of a southern American smokehouse -style burger, you’ll probably have dark, maple-cured and/or streaky bacon in mind. But what they’ve included here is the light gammon-esque stuff that you’re more likely to see on a British breakfast plate. It was odd. Good-odd, or bad-odd, I hadn’t decided and will come back to.

Have I mentioned the smell?

This burger smelled great, just like everything else here. That’s the glory of a smoker. Everything should be prepared in smoker. Soup. Cheesecakes.

I got my eager chops into it – for all its height, once it was squashed down to bite-height, it looked much more realistic.

I got biting into the cheese-covered patties first and discovered two things. Firstly, that a good blend of meat had been selected, and secondly that it had been cooked longer than I’d like.

The blend, well I’ve no idea what it was because it wasn’t stated on the menu, but I know I liked it. There was a good fat ratio, and plenty of tasty cuts, the combination of which worked really well.

The effect of this well-developed blend was slightly muted by not being offered medium, which is a real shame. I wonder if this was in a smokehouse in Alabama, if the burger would be returned in order to be cooked properly?

It’s all about personal preference though, and the easiest way to navigate that minefield is simply to ask the customer how they like it done.

Side-tracking for a moment, and this burger was big enough not to need anything on the side, but it also came with slaw and fries. I wasn’t particularly enamoured with the slaw, but the fries were really good. Quite thick, very crispy with a fluffy core and slightly seasoned.

But back to the burger. Pulled pork is often a terrible topping because it’s overdone. Here it’s done right, provided in topping-sized amounts so that it doesn’t overshadow the beef. And given its strong woody barbecue tones, you could see how that would be possible. I stuck a fork in and scooped a bit out on its own – nice stuff.

I find myself somewhat in a post-pulled-pork phase though, and these days I wouldn’t choose it. It happened to be in the burger I was having today, but it didn’t form any part of the decision.

The house sauce was a silent partner here. It didn’t have a strong taste and there wasn’t enough of it. As I said, there was a good fat content in the beef, and plenty of cheese, so I wasn’t finding it too dry, but just to jazz things up a bit, about halfway through my burger, I poured a dollop of the Hickory’s BBQ sauce on the top.

The cheese and lettuce did cheesy, lettucy things, but I’m going to end by going back to that breakfast bacon.

I don’t think a thick slice of basically gammon will work in many burgers, but it did the job here. Because the setting was a heavy smokey sweet BBQ affair, the plainer approach to the bacon worked as a sort of counterbalance.

A really good solid effort with lots going on, but I think I’ll be ordering a rack of Kansas ribs next time.