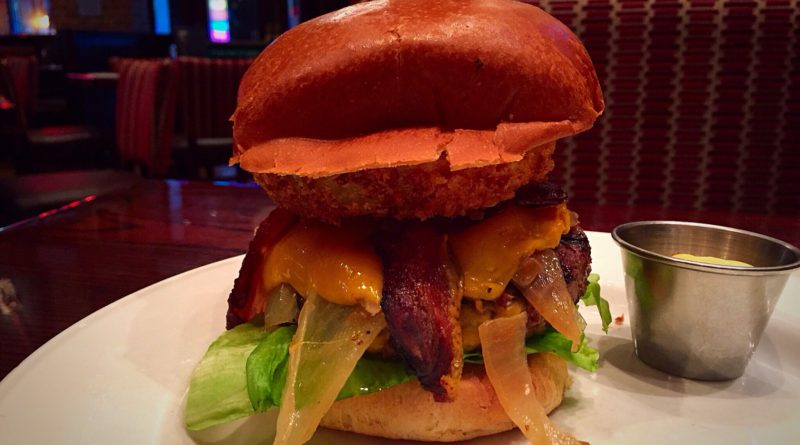 Like most places, it opens at 12 and I was there at 12. Doors locked. One of my pet hates.

I ended up having to phone and subtly ask what time they opened, knowing full well what time it was. I was told there was a staff meeting in the morning which had overrun. I know it makes me sound like a grumpy old sailor but that simply isn’t acceptable.

Except, accept it I must, if I wanted to eat, so gripe over, the doors with the guitar handles were opened and a couple of polite people sat me down and took my order.

I find it hard to believe there’s anyone who has never been to a Hard Rock Cafe before.

The name pretty much describes the place. American type food (although it was actually founded in Britain) with rock memorabilia all over the walls and hard rock (ish) playing.

It’s not metal and anyone (like me) who’d like to accompany their lunch with Anaal Nathrakh or Deathspell Omega is probably going to be disappointed.

There are in fact at least three in Britain – Edinburgh, Manchester and the original one in London (there used to be more). I’m at the Manchester one today but I understand you can get the same burgers at Hard Rock Cafes around the world.

I’m pushed for time so I ordered straight away. The Legendary Burger.

OK, name’s a bit pretentious and it wasn’t developed by Barney Stinson, but it’s essentially a bacon cheeseburger with a large tomato slice and a large onion ring.

heir burger sauce is spicy mayo. On the face of it, it all sounds terrific. Let’s see if it lives up to its name.

It arrived relatively quickly and looked and smelled amazing. I’d ordered it with twisted Mac and cheese on the side, rather than fries, and that looked amazing too.

As I started to eat that, I realised two things. Firstly, the mac n cheese was as great as it looked and secondly the fork was terrible. Like a massive paddle at the holding end, it was heavy and awkward.

Before I could tuck into the burger, the manager caught me taking photos and handed me a card with their Twitter details and other social media stuff.

Anyway, picking this up, it was big. One of those dislocated-jaw-burgers! There was also fried onions in there, which looked great.

I removed the switchblade sticking out the top (that’s quite rock n roll) and got on with the job of eating.

After two bites, the bottom bun gave up totally. It crumbled and stuff started falling out. That was a real shame because it was quite tasty. I turned it upside down to make use of the slightly more robust top bun.

The spicy mayo had come in a separate little pot and it was good on its own, so I spread it on.

The onions were very good. Tasty, shiny and very numerous. They got all mixed up with the mayo and ended up jointly creating the best topping in there.

I’m a very big fan of bacon on burgers, and the bacon here looked really good but for some reason, that just really didn’t translate to taste. It was there and I did just get it, but I had to concentrate hard.

The very orangey cheese did a good job, had a nice taste and lubricated the meat, which was just as well.

The beef. I’d opted to stick with the medium-well cooking that’s recommended. I wish I hadn’t.

As is so often the case, it seems to have erred on the side of well-done and as a result, I couldn’t really find much pink in there at all. And unfortunately that had the effect of drying it out. A real shame because it was a good thick chunk of beef.

The cheese, the mayo-covered onions and my imagination all worked very hard to counteract the overcooking. I so wish I’d asked for it medium, and I will absolutely do that next time.

It was a very big burger and a bit of a struggle to finish if I’m very honest.

Despite the gripes, I’m pleased to say that I did enjoy it. It was really good. Might have pretty close to “legendary” if I’d ordered it medium.

God gave Rock n Roll to you. And then he sat down and had a burger. 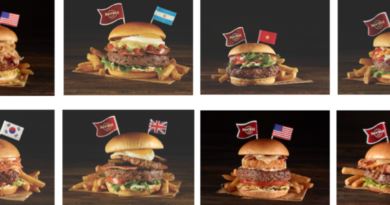 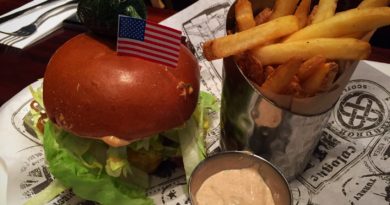 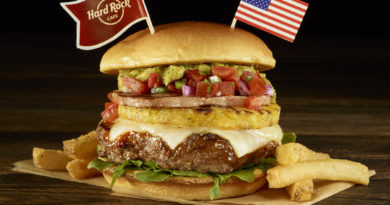