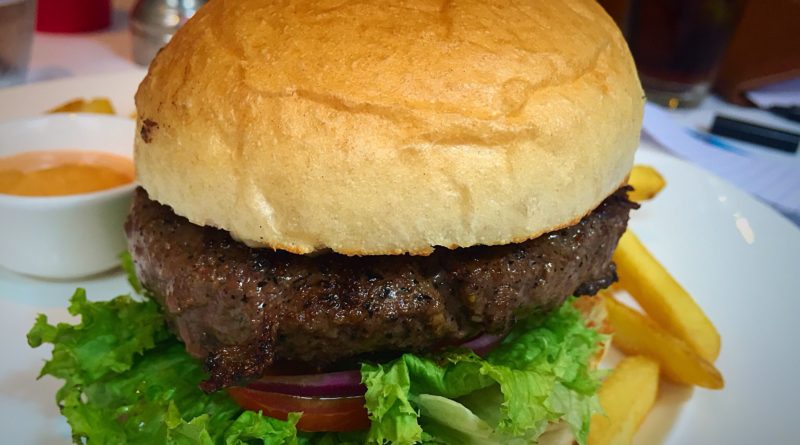 Within the classic, ornate Elliot House on Deansgate is Gusto, full of all the glamour and elegance a person needs. Gusto Burger – with melted mozzarella and fries.

One of those such restaurants is Gusto, with other branches mostly in the leafy well-heeled suburbs as well as some other cities in the northern half of Britain, so you can imagine the sort of market it’s targeting.

The city centre one occupies a slot which was apparently once going to be a flagship restaurant for Paul Heathcote. And as far as I understand, the company was recently part of food and drink behemoth Living Ventures, with Gusto’s MD coming to some sort of buyout arrangement.

That’s all very interesting, I’m sure, but it’s not why you’re reading this. You’re here for the burger, and so am I.

Stepping into the large space, we were greeted by high ceilings, a classic almost 20s feel to the decor and very slick liveried staff. Shades of brown, green and gold kept the place feeling premium without being new-money tacky and I was hoping that would carry on into the burger.

At this stage, it’s worth mentioning that the burger is also included on the lunch menu at £11.95 which also includes a drink so it’s quite a bit of a saving on the regular price.

The burger is sparsely described as having mozzarella and fries and was offered medium. The wait time of 30 minutes seemed quite long considering we were first in and there were only a handful of other tables.

I wasn’t in a rush, but anyone trying to fit this into a lunch-hour would’ve been rightly peeved. However, the other tables were clearly people from nearby offices with a liberal approach to the lunch “hour”.

Anyway, my burger arrived on a large plate with a generous scattering of fries. It was these fries that I tackled first and I was quite impressed. They had some patches of potato skin remaining and had been well-seasoned, although realistically you wouldn’t want to add any more salt.

The burger was served in a fairly plain bread roll, which was actually quite a refreshing change from the usual brioche which currently dominates the burger world.

The problem, however, with a plain roll is that it simply looks a little anaemic in photos although I can confirm it did its job well – slightly crispy on the outside, fluffy interior, tasty and strong enough to reach the finishing line.

As well as a covering of mozzarella on top, the thick burger patty sat on a bed of thin tomato slices, lettuce and a couple of large pieces of pickle which I had to remove as they aren’t my thing, certainly in those proportions.

My first impression was that the beef was very generous while the cheese wasn’t. When I opened the top bun the cheese looked really like it could have been cloaked a little thicker, especially with mozzarella which of course is very mild anyway. And with the cheese being the only thing actually described on the menu.

The patty if you recall, was medium and I’m sure glad I didn’t have it well done, because this was frankly well done anyway, with only a few pockets of pink throughout.

I think for most people, this burger would do the business, but with a lot of burgers (literally) under my belt, I’ve got a lot more beef blends to compare to. It wasn’t bad at all, but just didn’t have that wow factor that I immediately associate with great burgers.

The benchmark is the new patty at Almost Famous, by a long shot, but in fairness what they don’t know about burgers isn’t worth knowing, while Gusto is a high-end Italian restaurant that happens to have one burger on its menu.

I finished it, and enjoyed it to a point, in this case the tomatoes (which often I remove) and the red onion slices in there actually saved the day, keeping the taste fresh and interesting.

I didn’t get the impression that this patty had a high fat content and that, combined with the conservative application of cheese and lack of pink juiciness meant that the tomato was vital in keeping everything from being too dry.

Not for the first time I’ve had a burger in a non-burger restaurant and left knowing I’d be back for something more mainstream according to the venue’s offerings. I saw pasta and fish dishes going to other tables and was genuinely impressed.

The venue is lovely and striking, service impeccable and the menu very good as a whole. I’m just not sure it actually needs to offer a burger.