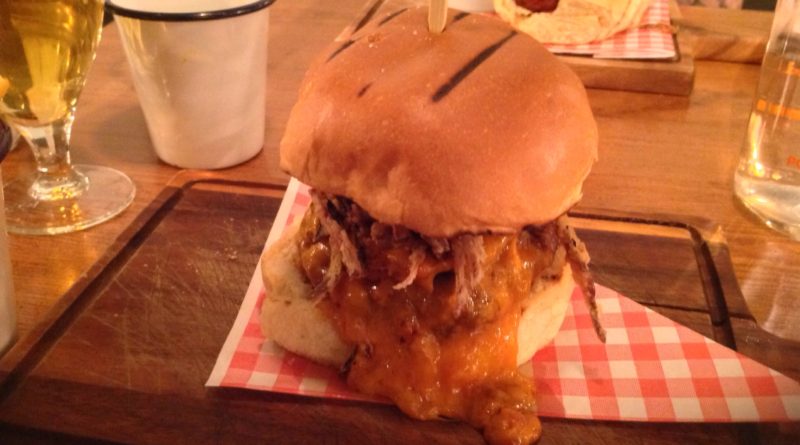 Burger Lad® returns with a look at the 8oz Bronx Burger being served up by the relatively new Grid Iron Bar & Grill located on Imperial Square in Cheltenham.

We were going to return with a fanfare but with Atomic Burger having to unexpectedly close a weekend or two ago it would be Grid Iron that would face the Burger Lad® branded scrutiny.

I was accompanied on this latest mission with my new “side dish”, Miss Milkshake and we were both looking forward to this new era in the 21st century burger adventure.

Having got to the Bar & Grill on a quiet weekday evening I was asked to pick a table and had a glance around the place (as usual Miss Milkshake kept me waiting a bit).

The restaurant is decked out pretty tidily with an industrial steakhouse feel. There’s low hanging chrome lighting, a semi open kitchen and table football and a punch bag in the corner. Maybe later…

As I added a few notes on the bPad I noticed Wi-Fi had connected without the need for a password. Like.

And with that I was joined by Miss Milkshake who was working on her latest project – the amazingly titled mocumentary: Burger Lad® – Behind the Glasses.

So like a pair of bosses we kicked off with the bbq chicken wings and chilli squid which were both enjoyable. We were also shocked (in a good way) that the chilli squid came without the accustomed garlic-style mayo. Ace!

I was asked how I would like my Bronx burger cooked (medium or well done) so opted for medium and after a relatively short wait I was presented with this tidy looking burger.

We’re no strangers to burgers being presented on planks but I liked the look of what was in front of me. The food looked good too.

The bun had been heavily toasted and thick, gooey cheese oozed out of its innards. Taking my first bite I noted the chargrilled, flame-licked taste and checked the patty which had been cooked to medium as ordered.

The taste of the Bronx was good. I wouldn’t go overboard and start proclaiming it to be the best burger ever or anything like that but it was an enjoyable bite and at £10.00 offers pretty good value.

The waiting staff were very commendable too and really friendly, even when I was caught snapping a shot of their new menu.

I’d opted for this burger ‘cause I was interested in checking out the field mushroom and crunchy onion combination.

So how were they? Well the mushroom had a faint, recognisable taste and was moist. I could have sworn it had been sautéed in just the slightest bit of garlic but might be wrong on that one.

I was expecting the crunchy onions to be similar to the ‘Top Taste’ Röstzwiebeln ones you get in supermarkets but these were home made, fried caramelised creations that worked well with the juicy, good quality beef.

You could tell they use good meat here at Grid Iron and that the patty was made by hand.

Do you know what? I’d almost say it was slightly on the dry side as I finished this up, so the addition of a sauce of some sort or dare I say mayo on the buns might just assist the Bronx.

Other than that minor observation this was a pretty decent burger and I’d probably pop back again in the near future to try something else.

Miss Milkshake went with the chilli hotdog and sweet potato fries but commented that there was no way near enough chilli on it.

I popped to the gents and had a snigger at the framed posters on the wall in there. “Prudes should stay away from the nudes in the dudes bathroom” I wrote when I got back to the table. I nearly got a subscription to “Spank Magazine” and “Bettie’s School for Wayward Girls & Women” when we got back to BLHQ.

Oh we also really loved the homemade BBQ sauce which was cutely served up in a mini milk churn. The perfectly cooked French fries were grand dipped in this delightful little number.

So Burger Lad® is back.

We’ll have plenty of reviews coming in 2014 so don’t blink or you might miss it. With that let’s take one last look at the 8oz Grid Iron Bronx burger – a respectable addition to the Cheltenham burger scene.