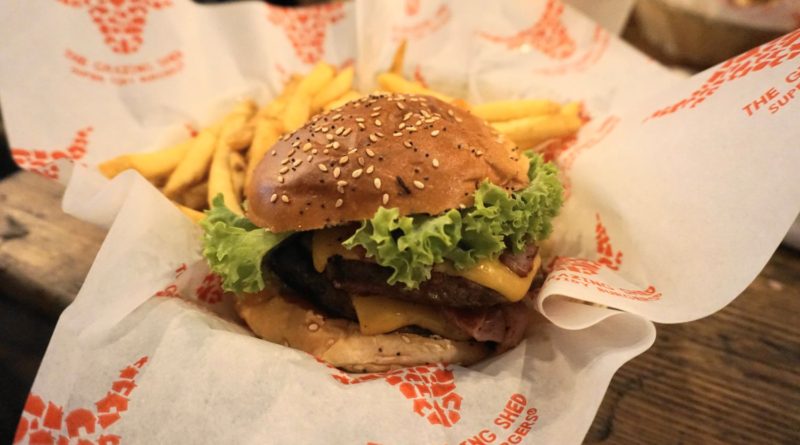 The Grazing Shed is a Cardiff success story – see our previous review here.

From one store by the Motorpoint Arena a few years back, they are now up to three individual stores as well as outlets at Cardiff City Football Club and the newly opened Ice Arena Wales in the Bay.

Their website states that “The Grazing Shed is a parable of life in twenty first century Wales”, by which I can only assume they mean pretty, but occasionally damp and with a significant over-reliance on public sector employment.

Story aside, their burgers have been able to do the talking for them.

The Grazing Shed was finalist in ‘Britain’s Best Burger’ in 2016 and remains regularly highly rated by those living in the City.

That isn’t to say it has all been plain sailing, with two restaurants entering liquidation last year due to strong competition in the area, however both remain open and one the subject of this review.

So it is off to the leafy suburbs of Cyncoed to visit their main outpost outside of the City Centre, within a short walk of the stunning Roath Park.

The first thing to hit me when I walked in was….well, smoke.

A combination of grilled meat and ventilation which didn’t seem up to the job meant there was a certain acrid smoke smell throughout the place, a little off-putting.

The décor was in line with the ‘shed’ feel, with plenty of wood and pictures on the wall showing off their policy of locally sourced ingredients, with pictures of their butcher, their baker and, presumably somewhere, candlestick maker.

But I’m much less interested in interior design than I am meat and cheese between bread.

I’ve opted for the giant haystacks for a simple reason, I’m hungry – and this is certainly one of the largest burgers they do.

Each patty is 6oz of 100% Welsh Beef, so two patties means 12oz of beef which should put an end to my issue of hunger. 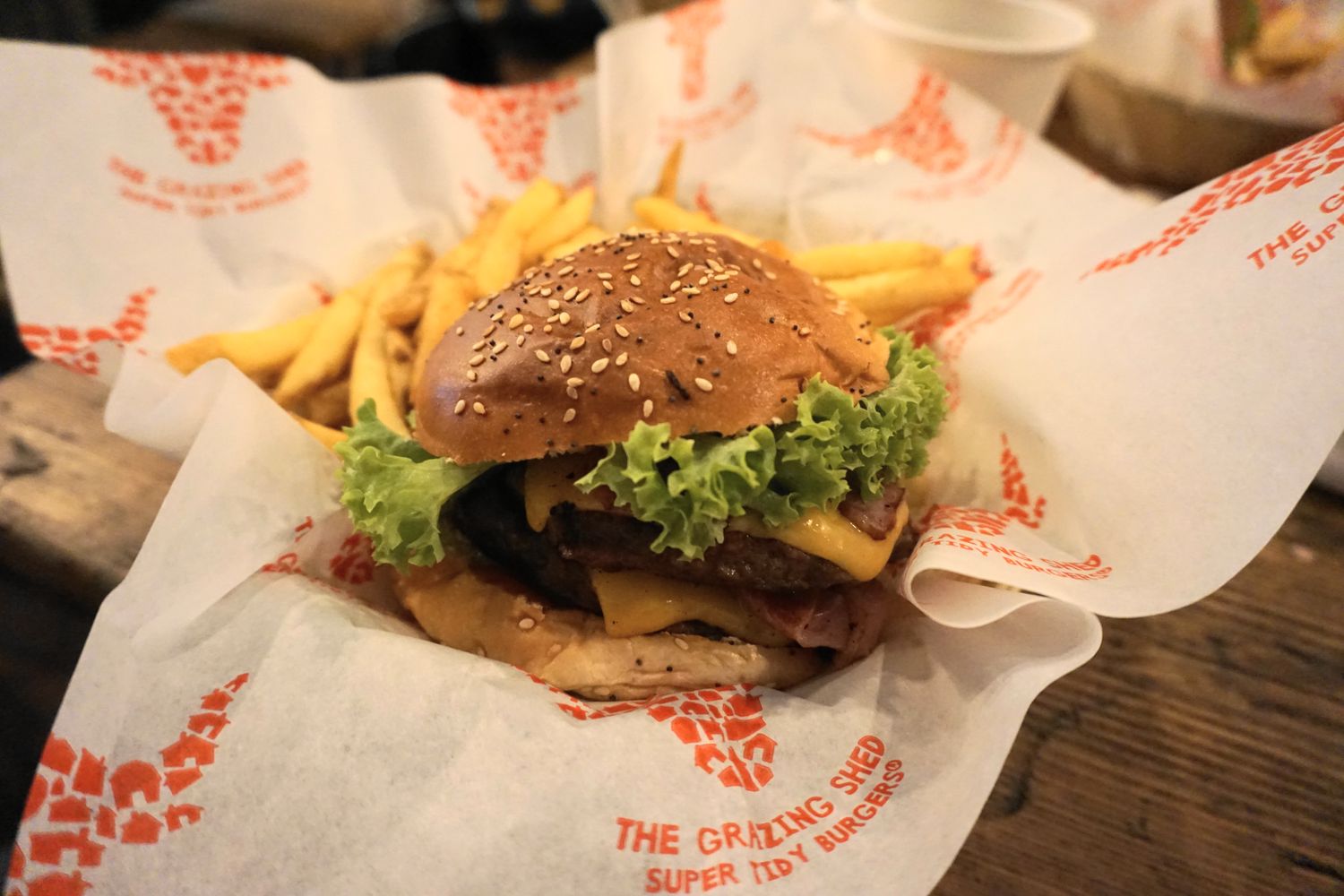 I should mention some of the other things on the menu.

The Grazing Shed has developed a fond following among vegetarians and even has a vegan menu to boot.

I sampled my wife’s ‘junior veggie’ burger (she wasn’t that hungry) and found it full of herby flavours and one which I’m sure makes an enjoyable alternative to beef.

The current special was a Bollywood Burger, featuring poppadoms, curried mayo, mango chutney and tzatziki, which all sounds a bit too saucy to me (and not in the good way).

Service was swift, with only a short wait. You can see the staff working in the kitchen, showing each order being freshly prepared.

Mention should certainly go to the ‘super tidy sodas’, which included a diet cherry bakewell cola drink which was superb. Think cherry coke with a hint of almond.

Seriously, they should bottle and sell that stuff by the case.

On arrival, the burger, along with a portion of skin on fries (albeit the ‘from a bag’ rather than ‘from a potato’ variety) comes on plastic in a basket.

The burger, cheese and bacon along with the customary lettuce are all visible from the side and it screams ‘eat me, for the love of god eat me’ at my hungry soul.

Fries are hot, tasty and plentiful. Half the portion of fries would have been enough. They’re certainly fine, although little to remark on themselves.

The patties were on the coarser side, which gave it a good chew, and still with a pink finish maybe just past the medium side of things.

It wasn’t dry and had a distinct beefy flavour and savoury twang which showed the strength of the ingredients. In summary, it’s great.

The cheese oozed from the side and added a creamy element which perfectly complemented the beef, and the smoke from the turkey bacon rounded the predominant flavours out well. 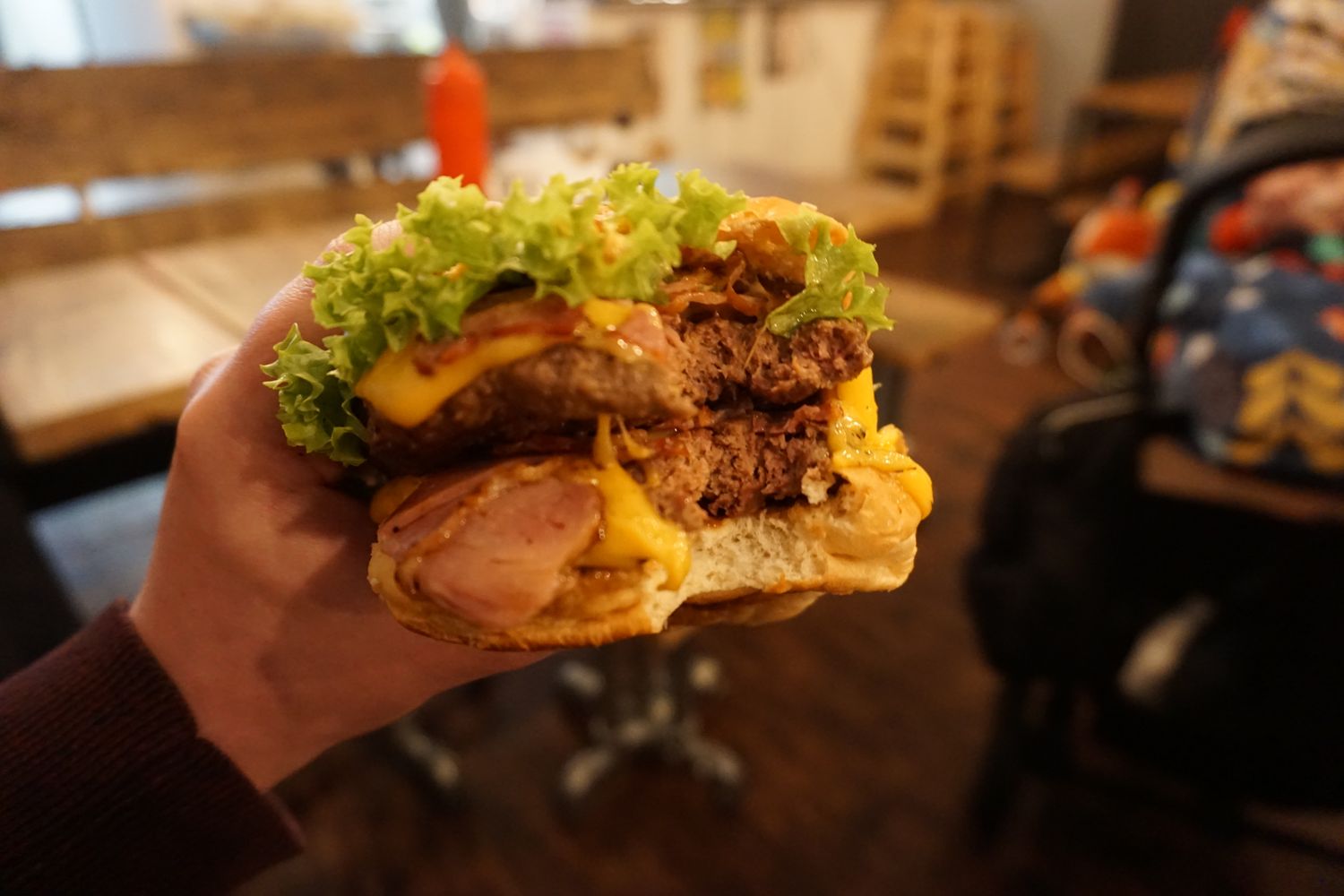 The ketchup, Cajun mayo and red onion confit all played a part and could be tasted, although were slightly lost among the feast of meat and cheese.

The confit in particular, when it had a chance to shine through, added a touch of sweetness which enhanced things further.

The Cajun mayo was fine, and added a tiny hint of spice, but could have been stronger to stand out more.

The bun was a seeded one, rare in the new world of brioche, and held up to the heavy mix of meat and sauces without falling apart.

All in all, this was a damn fine burger, worth the price tag, and they are certainly worth investigating. 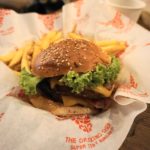 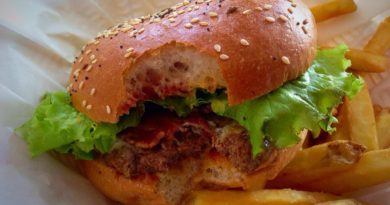 One thought on “The Grazing Shed Giant Haystacks”