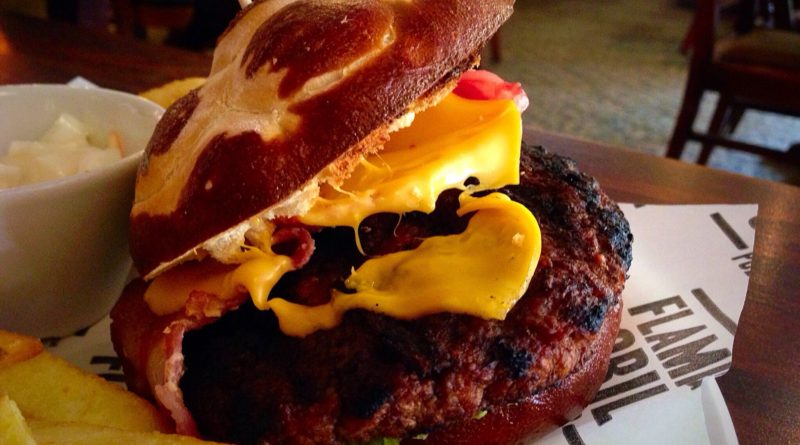 Our burgers are served in a brioche bun with sliced tomato, mixed salad leaves and chips. Flame-grilled 6oz beef burger topped with a cheese slice and crispy bacon in a pretzel bun, served with coleslaw and onion rings.

Flaming Grill has a lot of pubs across the UK, and quite a decent menu, including a section of “loaded burgers”, obviously – that’s why we’re here!

I’ve decided to go for the Cheese and Bacon Pretzel Burger – £5.99 with chips and salad.

This is a 6oz patty with cheese and bacon in a pretzel bun (other burgers seem to come in a brioche bun). It comes with coleslaw and onion rings as well, and there was an option to take a second patty which would be £7.49, but I declined.

If you have a look at the website, you’ll find your own local Flaming Grill – individually named.

There are actually a lot of these large pub chains that many people won’t have heard of by name, because the pubs themselves are individually named.

But the burger I’m having caught my eye because the notion of a pretzel bun seemed out of the ordinary. Otherwise I’d probably have gone for the Moroccan Lamb burger.

I find a table, place my order and sit with my Pepsi.

Why do so many shops and other places hold onto your change until they can put it on top of your receipt?

Who puts the receipt in the same part of the wallet / purse as the coins? It just has to be re-separated.

Anyway, my burger arrives and the bun looks a bit like a football. The burger itself looks extremely well done.

Tucking in, the chips are thick and typically pub-ish. The onion rings are very crispy and, you might find this an odd thing to say – strongly oniony.

However, a lot of places do onion rings where the onion taste doesn’t come through well. These ones are very nice.

Biting into the burger, I got a kind of burnt taste.

When I looked closer, I could see nothing was actually burnt, although the outside of the burger was close.

Inside, the meat was just fine, so the unique taste must come from the well-done cooking combined with the different style of bun.

I must be honest, it takes a bit of getting used to. At this point, I rather wish I’d had one of the brioche affairs.

However, further in, the bacon and cheese stepped in to say hello and their recognisable double riff balanced out the flavours more evenly.

The burger was cooked longer than I’d have chosen, and the pretzel bun, while interesting, wasn’t up there among my favourites.

I wouldn’t have it again. That said, I always like brioche, so I’d go straight for the lamb burger in brioche next time I go to a Flaming Grill.