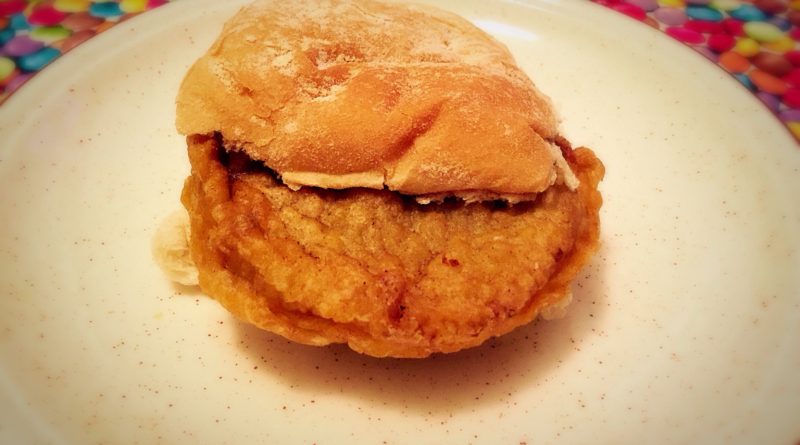 Ah, Dundee. One of Britain’s sunniest cities. While the deep fried Mars Bar is to be found somewhere between myth, legend and Glasgow, Dundee isn’t awfully afraid of throwing things in the oil. The venue was a chipper, which one doesn’t really matter because it could be one of any chippers in Dundee and nearby towns.

And as this is BurgerLad.com, I bypassed the deep fried pizza, the deep fried red pudding (which Warspite and Valiant had) and went straight to the burger.

Now, when I ordered this, I had actually expected the whole burger to be in batter, including the bun, but that wasn’t the case.

What they’d done was prepare the patties (two thin ones by the look of it), ‘Jucy Lucy’ style with some cheese in the middle. Unsurprisingly, given it had been in the fryer, the cheese was melted.

Ingredients-wise, that was it. No onions, lettuce, tomatoes or anything. I made sure to have a Cadbury’s Fruit and Nut with it to get a couple of my five-a-day in.

The chose bun was of course a Scottish morning roll. Large, soft, squashy and a little bit floury, this is one of my favourites. It’s a great bun on a Sunday morning with bacon, and it’s a great bun for a deep fried cheeseburger.

But was the stuff inside as good? Well, it probably won’t surprise you to find that it wasn’t.

Once you get over the fact that it’s coated in batter and deep fried, I think the main problem was the beef. It wasn’t a butcher’s gourmet cut. It might have been a budget supermarket frozen patty, I have absolutely no idea.

The soft, hot, melted cheese was possibly something cheap too. At £2.70 for the lot, I couldn’t grumble. The texture of it was pretty pleasing though.

On the outside, the batter gave a satisfying crunch, although of course my hands were somewhat covered in grease by the end of it.

The taste of it wasn’t awful, but it wasn’t among my favourite burgers either. It was utterly unique though and it ticks a box.

I am quite aware that this is a relatively short review, but I don’t know what else can be said about it. It tasted very much exactly as you’d imagine a deep fried cheeseburger would.

Some burgers need to be enjoyed over and over again. Others are very much once in a lifetime experiences. This was the latter (in batter).