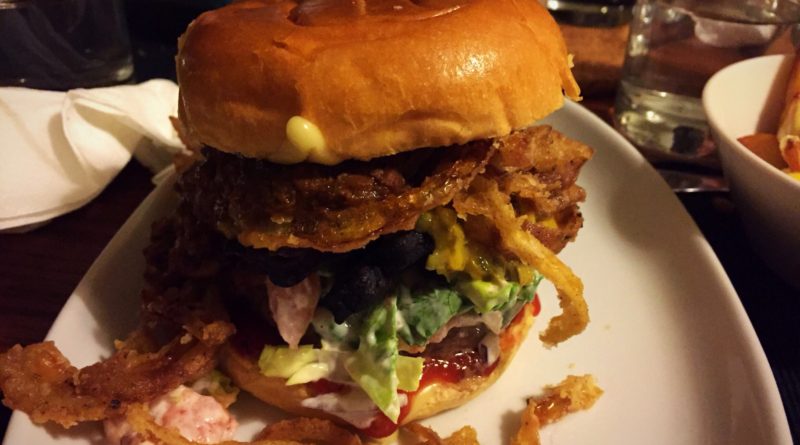 Ok, I’m being a bit mean here, showing you a burger you can’t just go and buy, but read on and you’ll see it is totally justified.

I’d also point out that the Drunken Butcher, Iain, is a friend so obviously there is a risk of bias, but again that worry was completely unnecessary due to the quality of this dish.

Drunken Butcher runs many supper clubs, usually not burgers and this is the first one I’ve been to. Completely different atmosphere to a restaurant, sitting in a private home surrounded by great people, some of whom are friends and others I hadn’t previously met.

There was a choice of three burgers on this menu and it was a ridiculously difficult undertaking to pick just one. But eventually I got there and I think it was probably DB’s famous super melty cheese on the fries what won it for me.

The other toppings sounds like it was going to be a tasty, lavish and rather messy affair, and that’s exactly what I wanted.

Firstly, the fries were actually chips, properly thick cut things, delicious and covered in DB’s signature super melty cheese, which made them very messy. And as if that wasn’t enough, there were bacon pieces sprinkled on top.

That may sound like a lot, but others at the table had a hefty amount of Finnish sausage, so I had effectively the light option!

I didn’t finish the chips. I simply couldn’t. The burger was massive as you can see, and I also had an enormous piece of fried chicken to start with. You simply do not go hungry at Drunken Butcher.

The burger though. My god, what a burger. The description (above) says “large patty”. This is the understatement of the year.

The beef mix has been pounded into a very dense form and even still it’s a doorstep. Here, the patty is a meal in itself, but when the burger arrived, I couldn’t even see the patty to start with.

That’s because it was completely covered in another whole meal – DB’s pork and beef chilli, complete with requisite kidney beans. This stuff was delicious, and I had to eat a fair amount of it before even thinking about tackling the burger.

Now, chilli isn’t the driest of burger toppings, so I kind of expected that the bun wasn’t going to last until the final whistle. This was in fact the case, and even turning it upside down after the bottom bun gave up, wasn’t a long term solution. This one was finished off with cutlery.

There were a lot of flavours in here, but the dominant theme was a slight heat, coming from the chilli and the spicy ketchup. Those combined with the burger relish (Finnish burger relish!) gave fantastic dirty gloopy feel to the burger and it was a huge amount of fun.

Texture wise, offsetting the sloppy sauces were both crispy onions and (unlisted in the burger description) some of the thickest pieces of cured bacon I’ve ever seen. These were seriously crunchy and marvellous.

But the patty. Wow, this was something else. Cooked to a kind of medium-rare with a bit of pink in the middle, it was as tasty as it was hefty.

Because I ended up eating with cutlery, I did get plenty opportunity to eat the patty by itself and I loved it. Iain did say later on that burger patties should be treated like steaks, and it showed.

This one, taste-wise, wasn’t far off a tremendous steak. It was later explained that the mix was two-thirds brisket and one-third skirt.

Downsides? Well virtually none I really have to say.

The sheer volume of food, and the sunken battleship feeling in my belly for the following 24 hours, some could argue was a downside, but I did kind of know what I was getting into. And because the burger is so tasty, stopping wasn’t an option mentally, and I only stopped when the door to my stomach was closed.

Jaw dropping stuff here, and I do feel a little guilty reviewing a burger that many of you won’t be able to have. That said, the #DBHipster has made appearances before and I sincerely doubt it will be too long before it shows up at a Drunken Butcher event again.

I’d definitely have it again, definitely definitely, but I really must go and lie down to digest this one first.