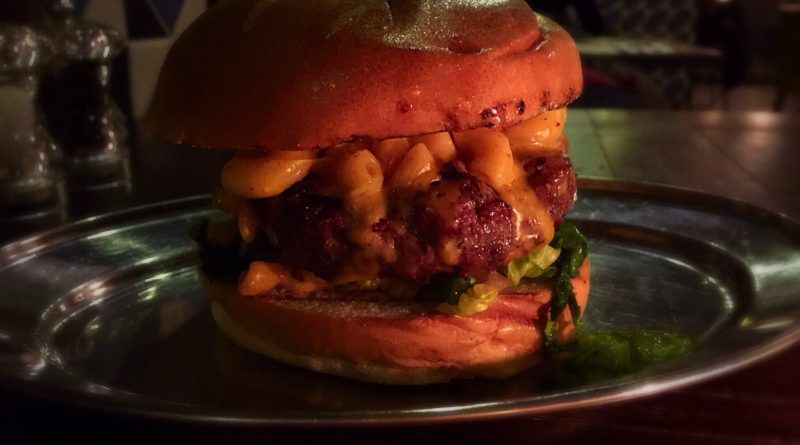 I went to the very last day of Tommi’s residency at Dirty Bones in Kensington, which was known as Dirty Tommi’s and is a pop-up collaboration between Tommi’s Burger Joint and Dirty Bones Restaurant and Cocktail Bar.

Dirty Tommi’s was on my radar for ages. The novelty of a Mac and Cheese burger had really captured my attention.

Essentially a cheeseburger, instead of just cheese, it was topped with macaroni and cheese – a gimmick maybe, but one that interested me greatly.

So, have a look at this with a view to reviewing the quality of the burgers at Tommi’s (which the London part of the Internet rates highly) and Dirty Bones as a venue (which isn’t normally a burger joint).

I went down the almost hidden staircase into the ante-room where I was greeted. Sort of. There was a strange sense of aloofness, I couldn’t quite put my finger on it. Anyway, I ordered my Brooklyn beer from the waitress and had a look around.

The music was of the (c)rap variety and the place was cold. But it looked good. A nice use of lighting which was great for everything except photos of the burger (so please accept my apologies there).

I ordered the burger I’d been waiting for. Mac and cheese with lettuce and the Dirty Bones steak glaze.

OK, so mac and cheese on a burger IS a gimmick, but bear in mind it’s replacing the cheese and, apart from a bit of lettuce, there’s not an overload of toppings here so it is about right.

After the residency ended, the menu went back to chicken, steaks and hot dogs. No burgers, I don’t think. For burgers you now go to Tommi’s in Marylebone.

So, in terms of the venue, it’s nice enough. If you want a cool (in both senses of the word) place to eat hot dogs and drink beer – great, but a few smiles wouldn’t have gone amiss. Burger-wise, it is going to be a view on Tommi’s.

The place is not big, and I imagine it getting very full at busy times, probably just the same as Tommi’s own places.

It’s a basement though, and there’s no getting over that. No windows. And I had to ask for the heating to be turned on.

Anyway, I waited for my burger to show up. I’d been waiting for a long time since first clocking it on the Internet. Mac and cheese burger. Could it be more perfect? Well, maybe… if it included bacon …. and jalapeños.

It arrived, exactly as expected. A neat glazed bun with bits of macaroni popping out all around. I was mesmerised.

Biting in, I was quite surprised. I didn’t get the Mac at all. Cheese, yes, but no Mac. Its taste and texture seemed to be cancelled out by the bun. What I did get though was a great cheeseburger which I expect is par for the course at Tommi’s.

The Mac was certainly generous, but I suspect its presence was more for the aesthetics than the taste. Somehow that was disappointing, but really it shouldn’t be.

As cheeseburgers go, it was fantastic. The meat was perfectly cooked, towards medium. It was soft, juicy, fragrant and damn tasty.

I imagine this is Tommi’s regular patty and for that reason can recommend it. Marvellous.

The mac and cheese dribbled out a bit and I did enjoy a few forkfuls of it alone. Really very good, strongly cheesy. Dirty Bones also had a mac and cheese side dish, and I felt obliged to order that just to taste. It was very, very good, but we review burgers here.

The Dirty Tommi’s Dirty Mac burger fell short of expectations. But that is only a symptom of social media and the hype it generates. It’s unrealistic.

This was a damn fine burger and I’d love to give the regular menu at Tommi’s Burger Joint a try out. I could have done, instead of coming here, but I was drawn to this gimmick by the power of social media.

But that’s fine, because it was extremely enjoyable. Hype is a dangerous thing and risks spoiling something very good.

And this was a very good cheeseburger. It just happened to have macaroni on it too.