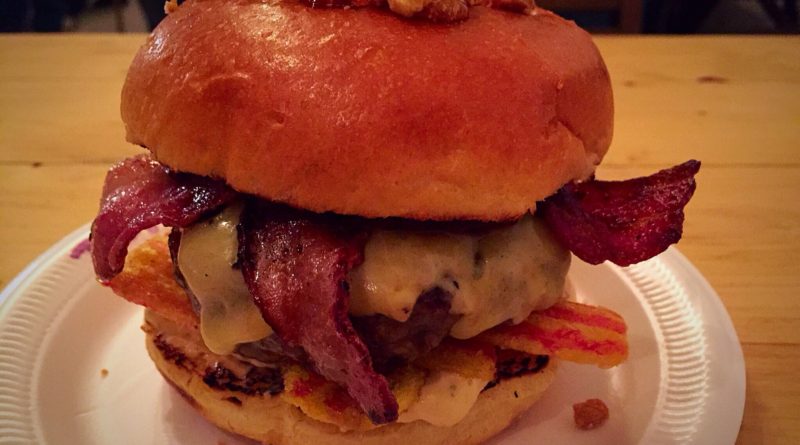 Ah, street food. Works so well in places like Malaysia where it’s warm and costs considerably less than the equivalent dish in a restaurant.

Not so in Britain, and the term is one of my dislikes. So Burger Lad® made me Executive Street Food Correspondent in addition to duties as PBC. He’s nice like that.

Joking aside, the trouble with street food in Britain is that it involves eating outside in the cold for most of the year. Or it goes indoors and technically isn’t street food anymore.

That’s Britain for you, and for that reason I haven’t really bought into the whole street food boom that’s going on in London and Manchester.

However, for traders I can see the benefit. Make some money with limited overheads, with perhaps a view to a more permanent spot once there’s enough capital. So for us food enthusiasts, we should embrace it, even if it does mean getting a bit cold.

Guerrilla Eats is one of a handful of groups set up to provide venues for the huge number of talented small traders Manchester has to offer. Today was their opening day, first of several weeks at Shudehill, and of course BurgerLad.com was there at the start.

BL: What are you doing?

AB: I’m having a cup of tea and watching what might be the last episode ever of Top Gear

BL: You need to go to Manchester. You can take the Burger Lad® Jet

AB: Why, what’s going on? It sounds important

BL: It is. The opening night of Guerrilla Eats.

BL: Yes. There’s a burger with Frazzles in it

So, going into the venue, it was a bit of a maze, with signage still being hastily scribbled on the wall.

Immediately everyone was friendly, with organisers, traders and customers all clearly having a good time. I instantly warmed to the concept.

There were about six or seven traders spread out over two floors and the whole operation had a kind of make-do-and-mend feel to it. The sort of attitude that kept our fine country going after the war.

And I bloody loved it. I even bumped into Mr Guerrilla Eats himself and bought him a drink. He’d been mad busy all day as you’d expect. We had a good chat about the street food scene and Manchester in general.

Just as with Jordan Gallimore at Filthy Cow, I left feeling that the food scene in Britain’s second city was in very safe hands, and these young custodians of quality and taste are doing the city proud.

Anyway, onto Dirty Food Revolution, one of the street food traders that has been popping up at this kind of thing for a while.

Essentially this is a business built on an excellent chuck patty in a bun with an eclectic mix of toppings, some of which you would never have thought of putting on a burger. Deep Fried Matchstix crisps, Krispy Kreme doughnuts, Pork Rind Crumb (which seems to be a bit of a signature for DFR).

And Frazzles. The bacon crisps we used to enjoy in school. DFR has stuck them in a burger, elevating an ordinary bacon cheese to unbelievable levels. The smoked bacon, pork rind and Frazzles worked together to give, unsurprisingly, piggy heaven.

When I first arrived at the stall, the boss was busy at the grill concocting the fantastic pink patties that form the core of their burgers. Two or three others were busy arranging toppings and buns etc.

On the menu tonight were six different offerings, each one as wacky as the next, including one built into a doughnut. That was not the one I had. Mine was a Dirty Swine.

The bun did its job and the bacon was excellent. The beef was fantastic from start to finish. The whole thing was quite sticky to hold and I did have to go looking for a napkin afterwards, but that’s part of the appeal.

The homemade Mayo and BBQ sauce worked with the generous amount of cheese to create a downright tasty, sloppy experience. Dirty Food Revolution is appropriately named.

The downside was that from the first bite it seemed a bit salty. Perhaps this was due to the pork rind on top, or the seasoning. It didn’t detract from the experience too much though, and was nothing a bottle of beer couldn’t fix. It was soon forgotten and I enjoyed the burger as a whole.

In fact, despite the crazy toppings on these burgers, they aren’t massive, and just a perfect size to get stuck into.

Like I’ve said before, you can add all the craziest toppings under the sun, but if the beef (and to a certain extent the bun) aren’t right, it shows.

Here the beef was prepared and cooked just right and such provided the perfect platform for all the fun and gimmickry.

As a burger reviewer, I wasn’t able to try all the other food on offer, because I was full. That’s a shame, sort of, because the concept was really great and all the other offerings I saw looked terrific too.

Dirty Food Revolution is well known in Manchester now and rightly so. Top quality food with more than an ounce of fun leads to very happy customers. If you haven’t bumped into them at any of the Manchester events, I strongly suggest you do so.

Top marks also to Guerrilla Eats and all the very best from the Burger Lad® team for a successful residency.